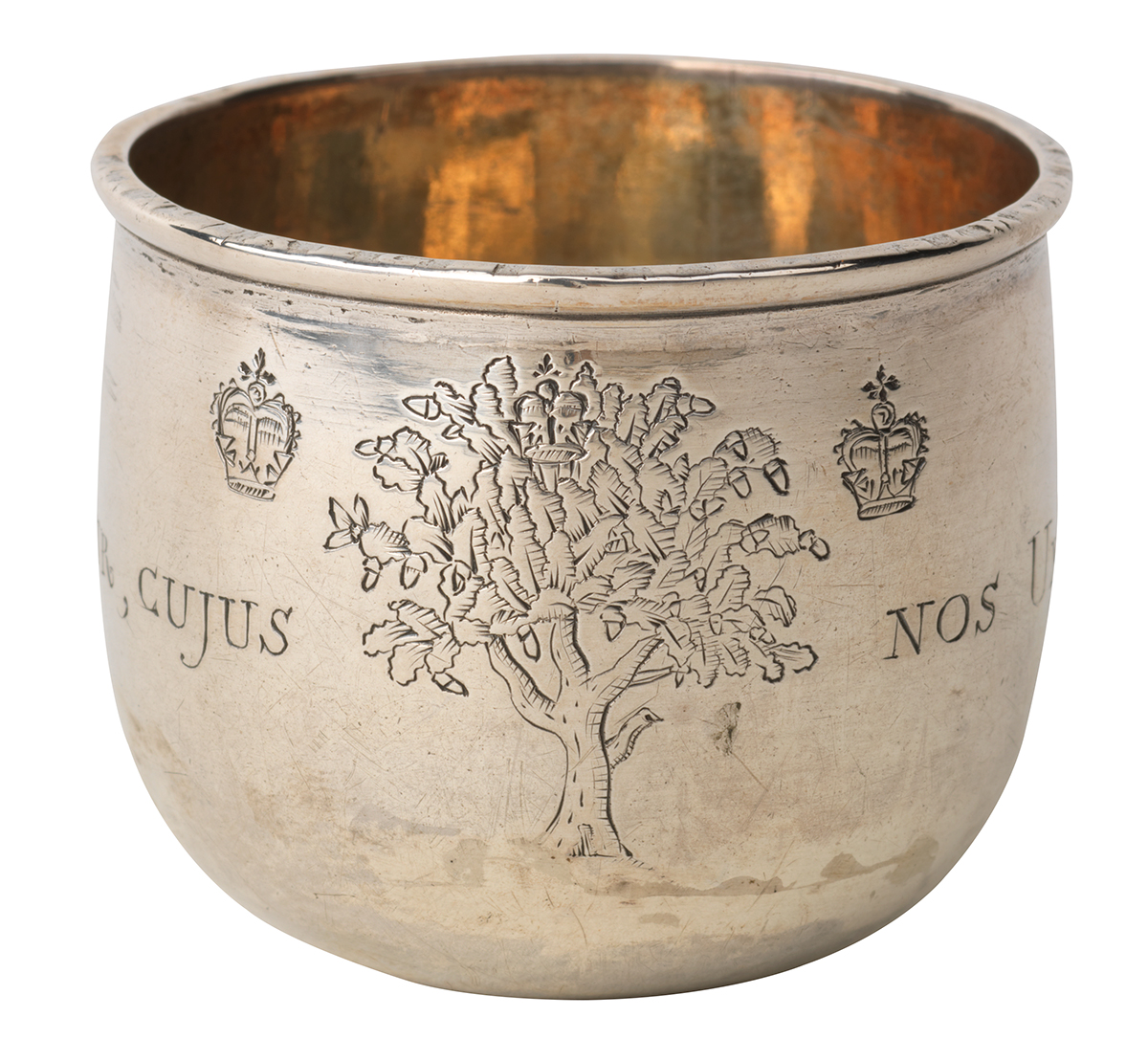 Early English colonists arrived in Virginia with a love of all things silver. A rich display of silver expressed an owner's wealth and power as well as their taste and refinement. Silver is shaped by either pouring molten metal into molds or hammering it into a final shape. After 1800, however, the availability of sheet silver and pre-made parts simplified the process of making containers.

Colonial Virginians acquired much of their important silver from London. After the Revolution, population growth, a rising tide of prosperity, and the genteel aspirations of an expanding middle class greatly expanded the market for silver. By 1820, there may have been hundreds of silversmiths in Virginia, some working nearly alone, others as part of large establishments employing many journeymen and apprentices. After 1820, silversmiths dealt in finished goods manufactured in large eastern cities, and after 1850, many silversmith shops came to be called jewelry stores.

The slideshow below includes not only silver produced in major urban centers, such as Alexandria, Norfolk, and Richmond, but also works crafted in small towns like Dumfries, Fincastle, and Waynesboro, as well as images of Virginia silversmiths themselves and place settings using silver, ceramics, and linens from our collections. Many of these items were part of a gift from James H. Willcox, Jr. 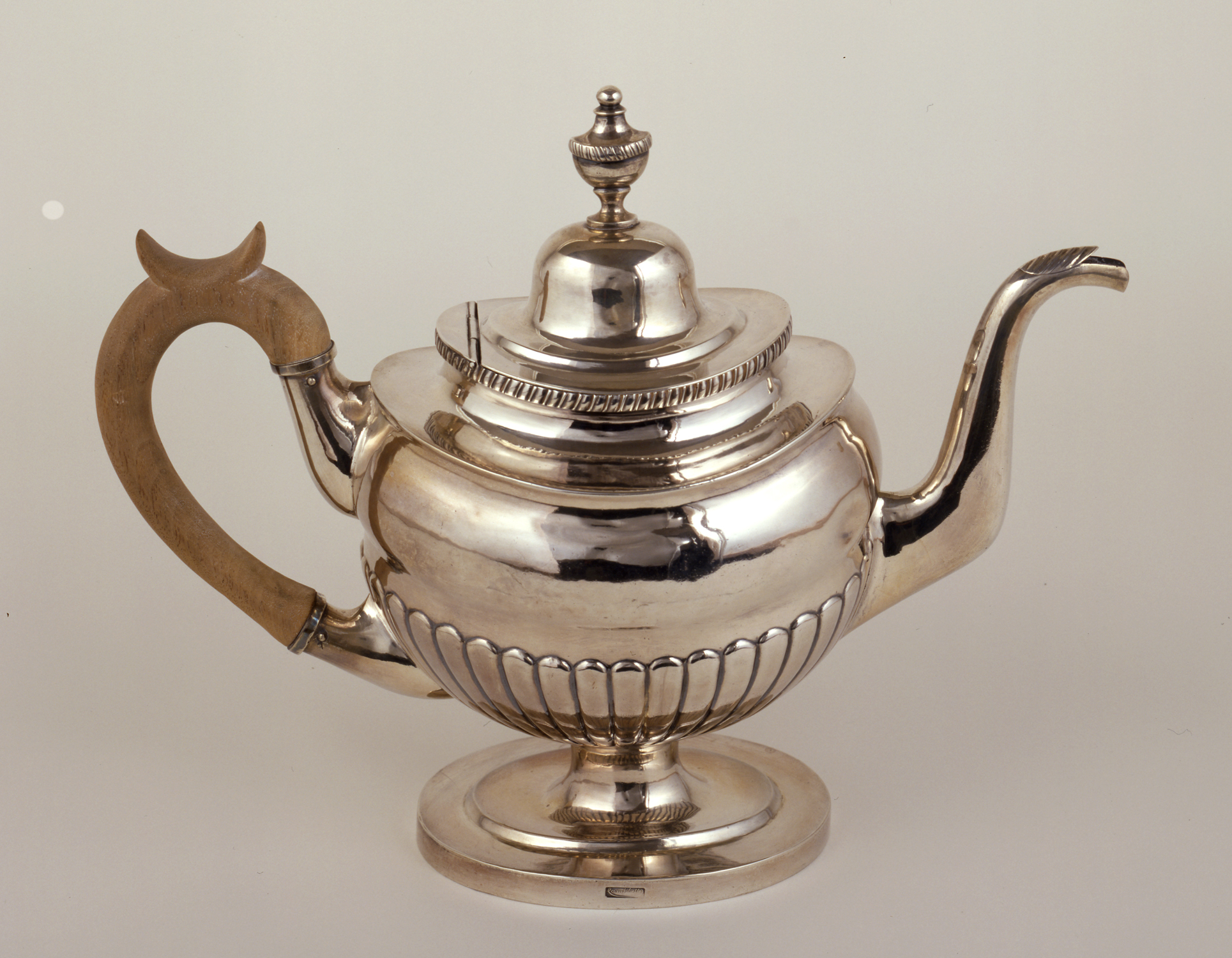 Silver teapot
Federal-style silver teapot with oval body and marked twice on base. There is a sugar dish from the same set. William L. Campbell (1759-1815) came to Winchester before 1785, but we do not know if he practiced silversmithing at that time. He returned to Scotland where his son, Thomas Boyle Campbell (1796-1858)---also a Winchester silversmith, was born. He probably returned to Winchester by 1810 and worked there until his death in 1815. Holloware of this quality from the early 19th c. is very rare for Winchester. 25.40 cm x 33.02 cm spout to handle. (VMHC 2003.390.2, Lora Robins Collection of Virginia Art, Virginia Historical Society, Richmond)
Image 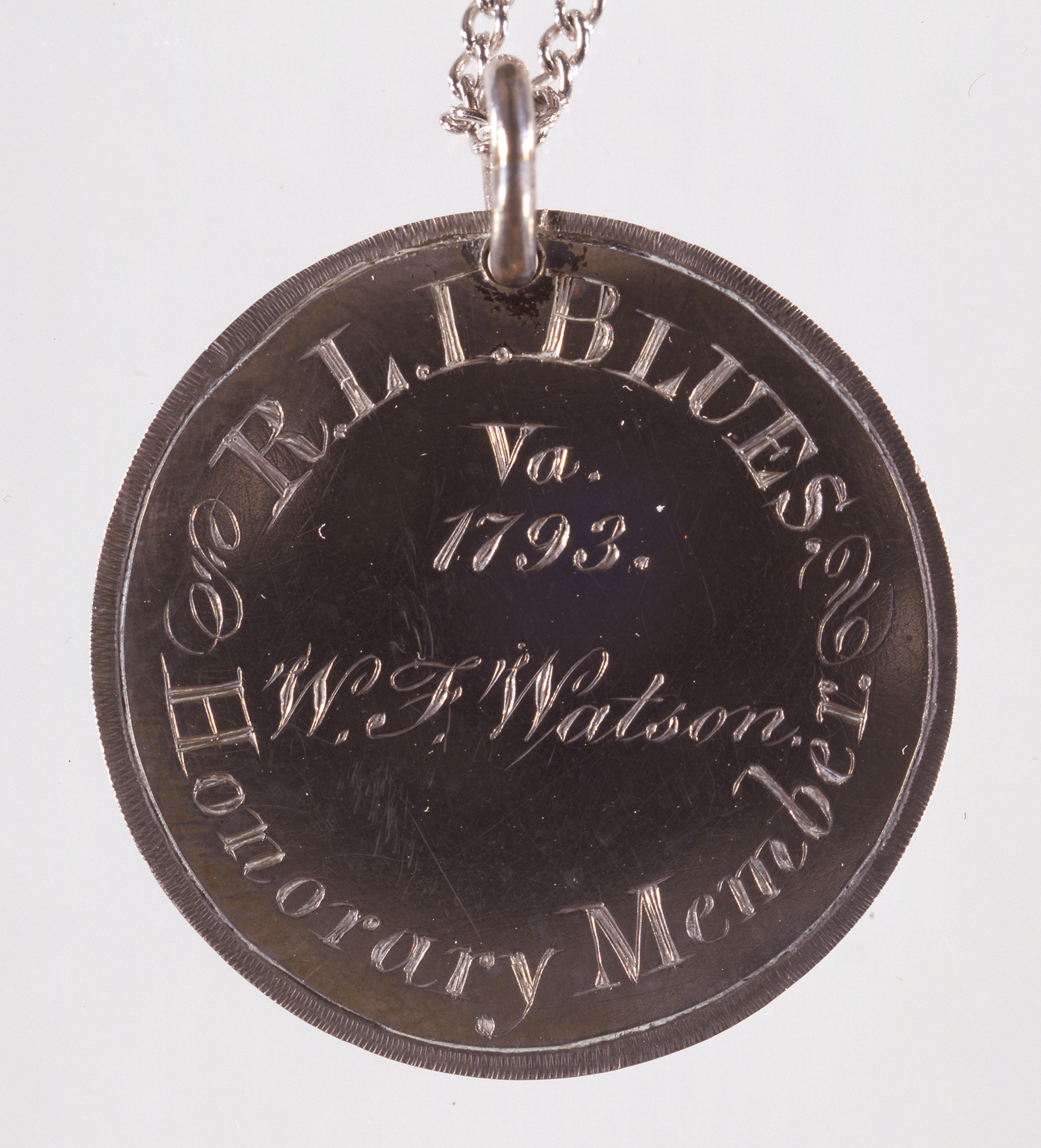 Richmond Light Infantry Blues pendant
Richmond Light Infantry Blues pendant. A round silver pendant engraved: "R.L.I. BLUES / Va / 1793 / W. F. Watson / Honorary Member" on obverse. The edge of pendant has been scored. Reverse has no engraving. The pendant hangs from a simple silver chain. The pendant is in a blue velvet necklace box with a white lining. (VMHC 1998.113.A-B)
Image 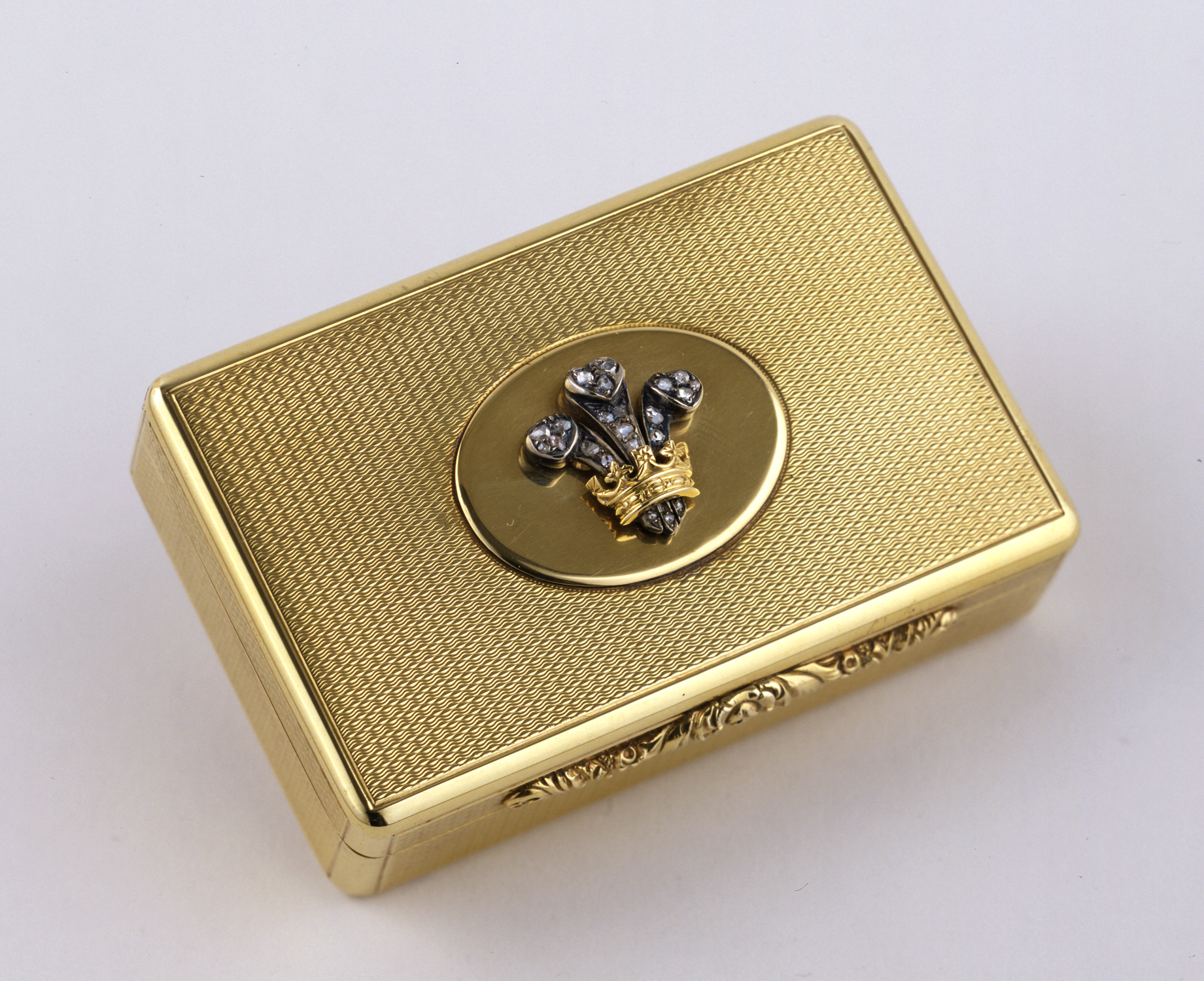 Gold snuffbox
Rare American gold snuffbox marked William Mitchell, Jr. The top of the box has diamonds and a crown. On the bottom of the box in the interior is engraved: To / My Friend / Edward with William Mitchell's stamp. In 1911, the Prince of Wales's plumes were added to the lid and the box was presented by Edward, Prince of Wales (1894-1972), "To My Friend," whos is not identified. Edward became Prince of Wales in 1911, Kin Edward VIII in January 1936 and Duke of Windsor upon his abdication in December 1936. The inscription inside also reades "11 June 1911" and is signed in script "Edward." One of the duties of the king's private secretary was to accumulate gold and silver boxes, watches, cigar and cigarette cases, and similar items, to be given by the royal family as tokens of appreciation to those who performed minor services for them. Somehow, this rare Virginia gold box made its way to England for that purpose. (VMHC 2000.252)
Image 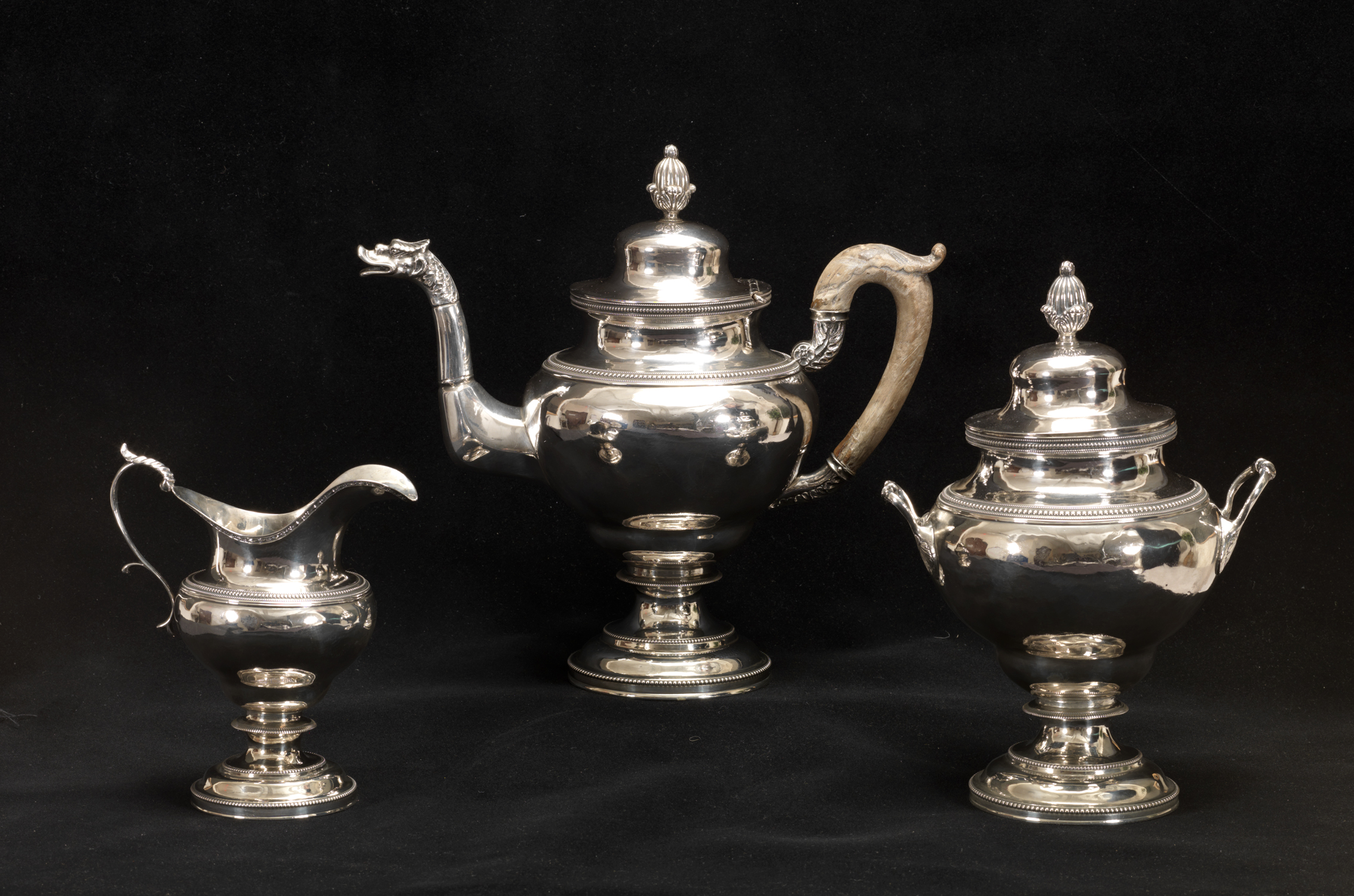 Silver teaspoon
Silver teaspoon. James Geddy (1731-1807) worked as a silversmith in Williamsburg (1766-1777), Dinwiddie County (1777-1783), and Petersburg (1783-1807). In 1767 he advertised silver teaspoons, tongs, and shoe and knee buckles. After having imported gold and silver work from England, Geddy became a member of the Non-Importation in 1770. In 1771-72, he advertised mourning rings and all kinds of engraving were done at the same shop by William Waddill (he became a silversmith in Petersburg also). In 1774, he again advertised imported wares, but also made "country" items. He lived in Dinwiddie County from 1778-1783. In 1783 he made his final move to Petersburg and announced himself on Oct. 4, 1783, as a goldsmith and watchmaker. In 1790 he was in partnership with his two sons in the firm of James Geddy and Sons, but the partnership did not last long. He soon relocated to Bollingbrook Street and advertised for an apprentice. He died May 12, 1807. (VMHC 2003.391.69)
Image

Silver sauce ladle
Silver sauce ladle with a fiddle handle. Armistead Truslow was an agent for Michael Gretter, a Richmond silversmith, in Lynchburg in 1813. In less than a year, Truslow owned the business, and by 1815 had opened an "elegant" shoe store in addition to the jewelry, silverware, and military ware. He died sometime around 1831. (VMHC 2003.390.22)
Image 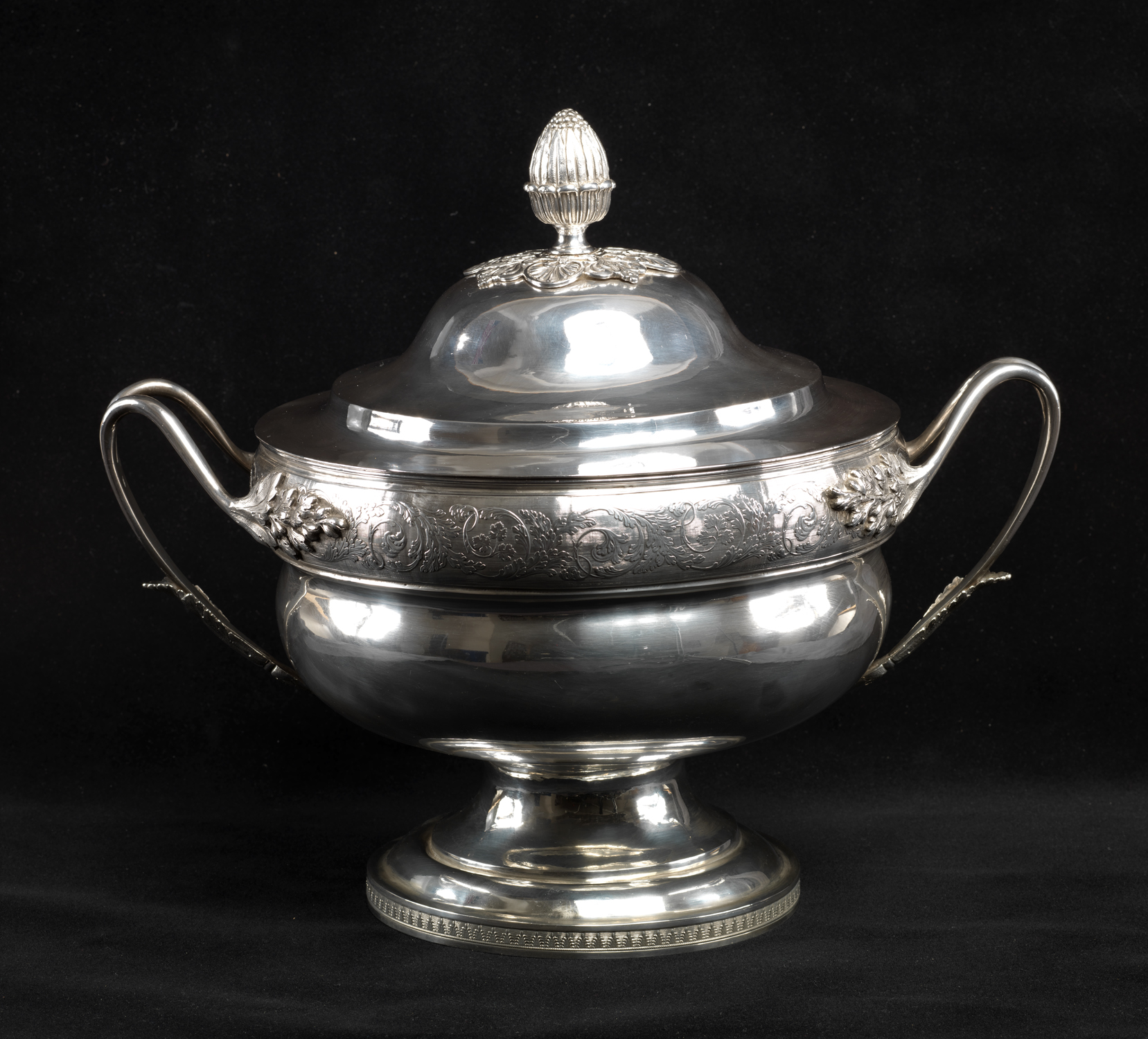