A Spoon That Got Around...

This silver serving spoon, labeled as “A Spoon That Got Around," was on view in The Story of Virginia exhibition in the late 2000s and early 2010s. The spoon uses an Old English pattern with a feathered edge and an oval bowl with drop, a pattern particularly popular in London in the 1770s. 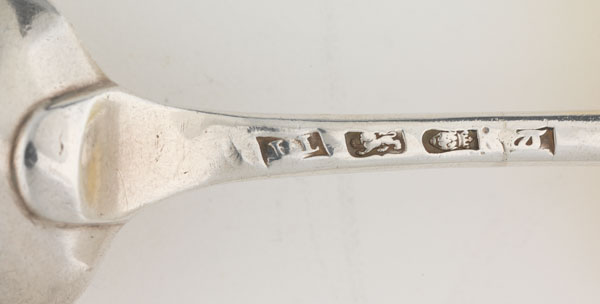 It is marked “T. T.” for Thomas Tookey with full London hallmarks for the year 1774. Thomas Tookey was the son of James Tookey, a silversmith who entered a mark as a largeworker in May 1750, and Thomas apprenticed with his father "to learn his art of spoonmaker" in 1766. After James died in 1773, Elizabeth Tookey is listed as a spoonmaker in that year; an example of the widow continuing her husband's workshop. Thomas Tookey entered his first mark in October 1773. 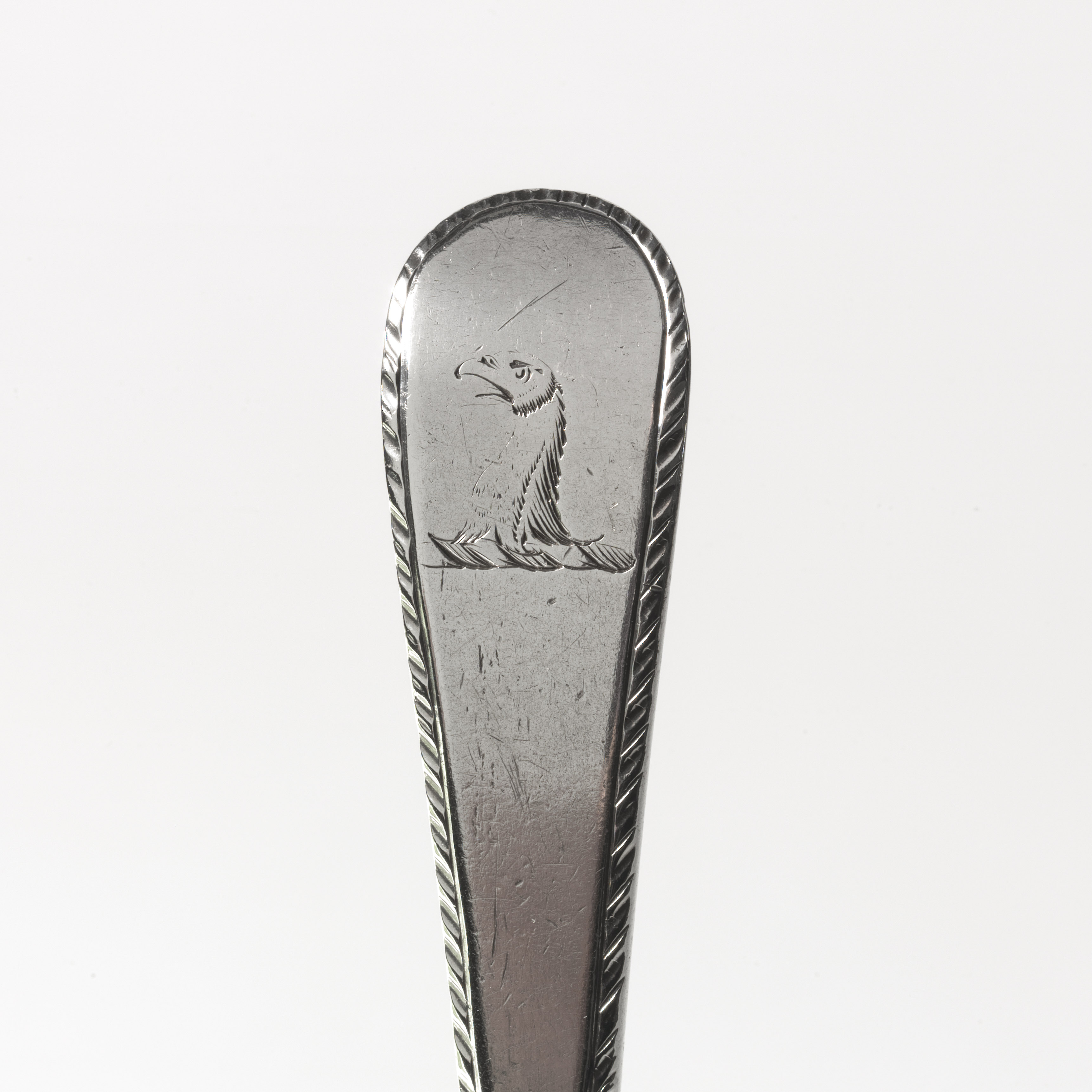 The Custis Family Crest: An Eagle

Engraved on the front handle is the Custis family crest, an eagle, adopted by John (“Jackie”) Parke Custis, son of Martha Washington (by her first husband) and stepson of George Washington. While spoons ordered by George Washington from London in 1762 were of the Hanoverian pattern, with the tip of the spoon turning upwards and the crest engraved on the reverse, when Washington ordered more spoons in 1780 from Richard Humphreys in Philadelphia, the silversmith matched the Old English feathered edge pattern of the Custis flatware. 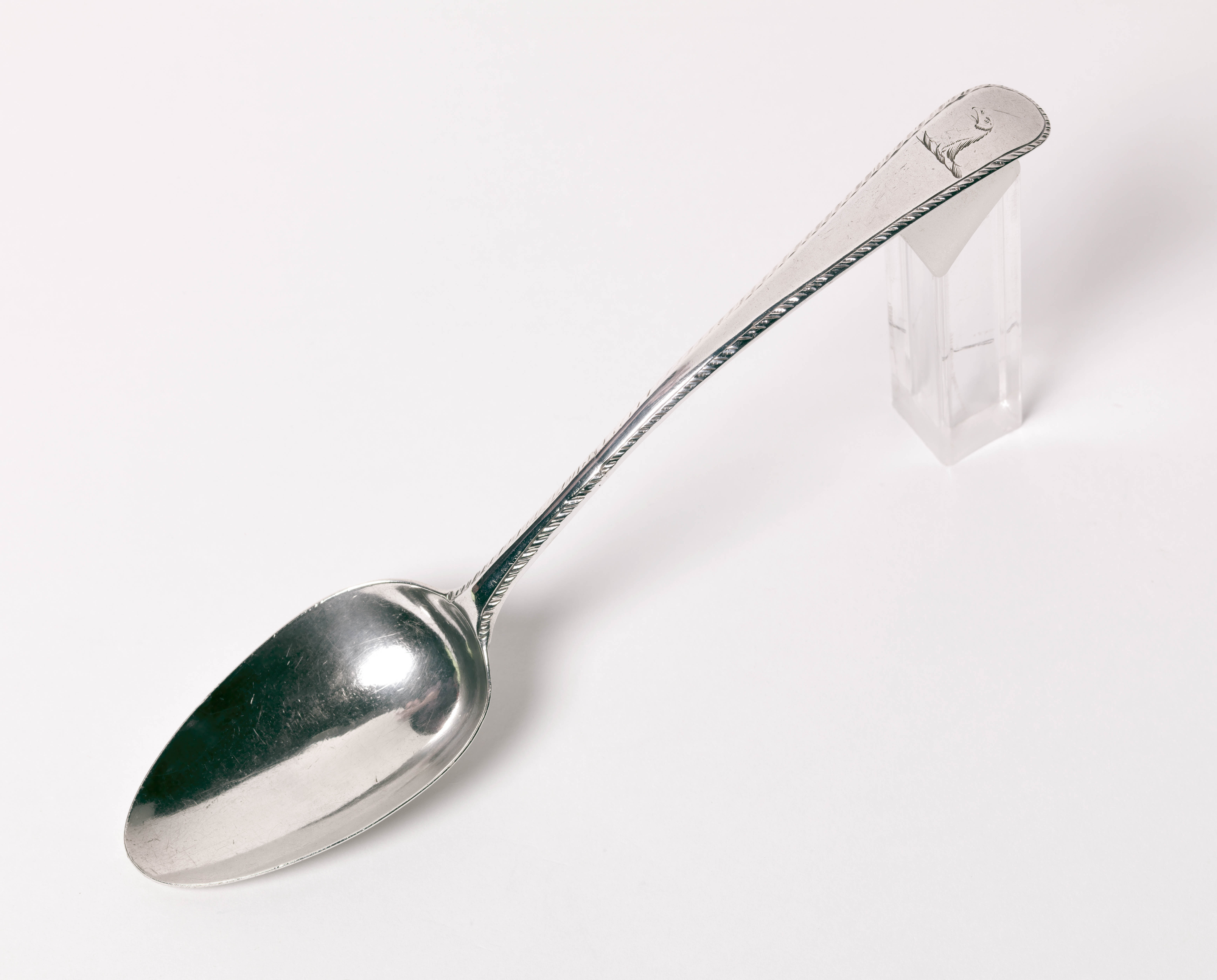 The full Old English pattern with feathered edge, oval bowl with drop, and engraving on front of the spoon.

This “Spoon That Got Around” has a long history at many tables. It was used at Mount Airy in Maryland, where Jackie Custis first lived with his wife Eleanor Calvert, and was later used at White House plantation in New Kent County, Virginia. The spoon passed by inheritance to George Washington Parke Custis, who grew up at Mount Vernon and later built Arlington. There, it was used by his daughter Mary Anna Randolph Custis, who married Robert E. Lee. They left Arlington at the beginning of the Civil War and buried much of their family silver at the Virginia Military Institute in Lexington. After the war it was recovered and the spoon was at the president’s house at Washington College (now Washington and Lee University), where Lee was president from 1865 to 1870. The spoon then passed to Robert E. Lee, Jr., Mary Custis Lee, and by descent in the family until it was purchased by the Virginia Historical Society in 2005.

This spoon was also featured in the 2011 VMHC exhibition, An American Turning Point: The Civil War in Virginia, a signature project of the Virginia Sesquicentennial of the American Civil War Commission, and then continued its journey around Virginia when the exhibition traveled to museums in Winchester, Lynchburg, Hampton, Roanoke, Quantico, Abingdon, and Appomattox between 2012 and 2015.