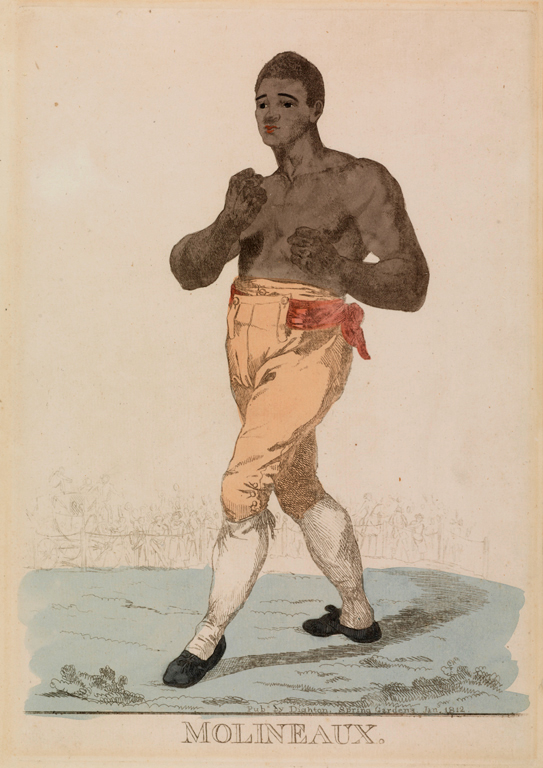 Born into enslavement on a Virginia plantation, Tom Molineaux (1784–1818) fought fellow enslaved people while plantation owners wagered on the contests. After winning one of these matches against a rival, Molineaux was granted his freedom and the sum of $500. By 1809, he had traveled to New York and subsequently to England where he pursued a title in London's boxing rings.

Two notorious fights with English champion Tom Cribb in 1810 and 1811 won him a place in boxing history. In December 1810, Molineaux challenged Crib in a classic encounter. After some 39 rounds of give and take, Molineaux finally collapsed from exhaustion. British journalist Pierce Egan wrote of the contest: "Molyneux [sic] proved himself as courageous a man as ever an adversary contended with...[He] astonished everyone, not only by his extraordinary power of hitting and his gigantic strength, but also by his acquaintance with the science, which was far greater than any had given him credit for." In the rematch on September 28, 1811, Crib had an easier time retaining his title with an 11th-round knockout. In 1814, Molineaux defeated William Fuller in a two-round fight that lasted over an hour. Egan was so impressed by the intense action and stamina of the combatants, that he wrote the fight was, "without parallel." The two Crib fights made Molineaux a celebrity in England. But he fought only sporadically, opting to engage in numerous sparring exhibitions. In 1818, he died in Dublin, Ireland.

This 1812 hand-colored etching depicts Molineaux at an English boxing match and is part of the VMHC collection. This item was purchased with funds provided by the Carrie Wheeler Buck Fund.