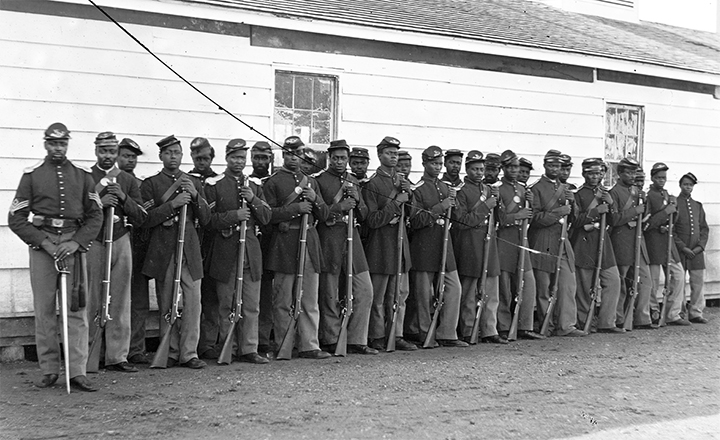 Photograph of Company E, 4th U.S. Colored Infantry at Fort Lincoln by William Morris Smith, between 1863 and 1866. (Image courtesy of the Library of Congress)

Among the VMHC's collections is a rare set of eleven muster rolls for the 30th U.S. Colored Troops (USCT) while camped at Petersburg, Virginia, from June 30 to August 31, 1864. Organized at Camp Stanton in Benedict, Maryland, in February 1864, the 30th USCT served in spring campaigns in Virginia and marched with the Army of the Potomac into the Wilderness, where the regiment distinguished itself during one of the bloodiest engagements of the Civil War.

Although nearly half of the war’s battles were fought in and around the Petersburg-Richmond area, the organized push to capture Petersburg came in the late spring and early summer of 1864. The early June attempt to capture the city failed, resulting in a stalemate that evolved into trench warfare. 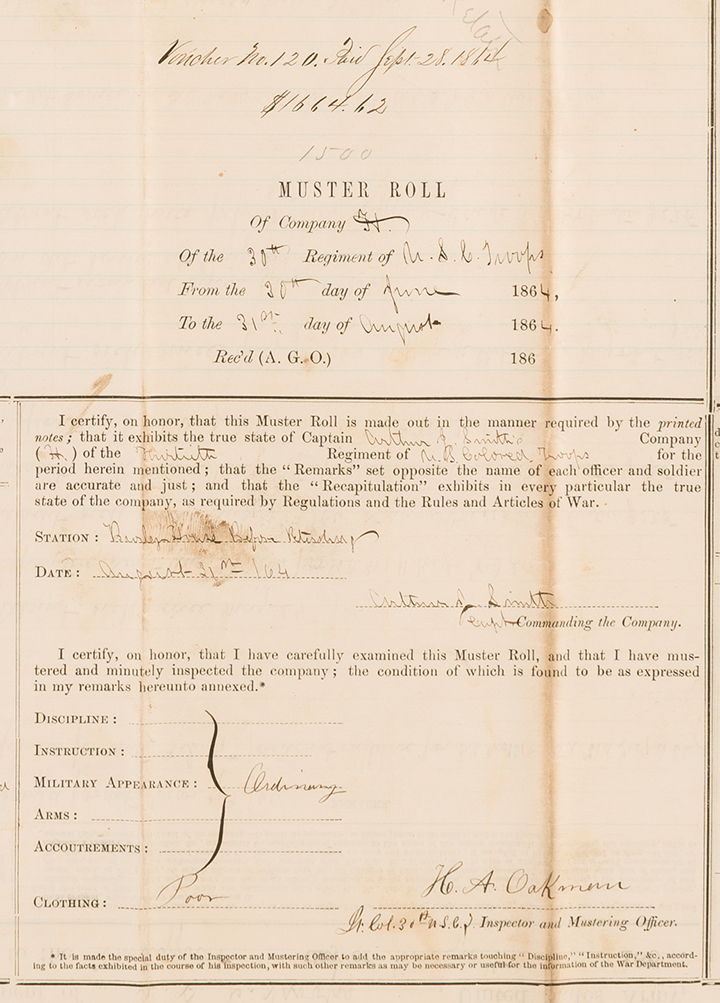 The 30th USCT was engaged in constructing fortifications during much of the siege; however, on July 30, when the Union army set off a massive explosion under the Confederate line, the regiment played a significant and gallant role in what became known as the Battle of the Crater. In late 1864 and early 1865, the 30th USCT participated in campaigns in North Carolina, including actions at Fort Fisher, Sugar Loaf Hill, Cox Bridge, and Wilmington. The 30th remained in North Carolina until it mustered out of service in December 1865.

The muster rolls provide valuable information on the men of the 30th, most of whom were from the Eastern Shore. Many have remarks beside their names, particularly if they were sick, wounded, or killed. As was typical, a significant number of men were out sick. Company “A” lists 34 on duty, 25 sick, 4 killed in action, and 4 missing in action. In addition, many of those listed as “sick” were likely the wounded at Petersburg. These rolls will serve as an extraordinary research tool, revealing the names and service of those who fought bravely, and some who gave their “last full measure of devotion.”