Although the origin of Valentine's Day is a mystery, February 14th has a long history as a day for friends and sweethearts to exchange tokens of affection. By the end of the eighteenth century, improvements in printing technology and lower postage rates made Valentines affordable, and ready-made cards began to compete with handwritten notes.

Valentines became so popular in the United States that printed cards were being mass-produced by the 1840s. The first paper Valentines featured real lace, floral decorations, and ribbons.

The Victorians took the fancy Valentine to a new level, and lacy cards dripping with silk, fringe, and tassels became the rage. This beautifully lithographed Valentine is a good example. The Art Nouveau styling features a fairy princess surrounded by poppies and daisies (she loves me, she loves me not?).

Second in sales only to Christmas cards, printed Valentines are now competing with digital greetings such as e-cards. 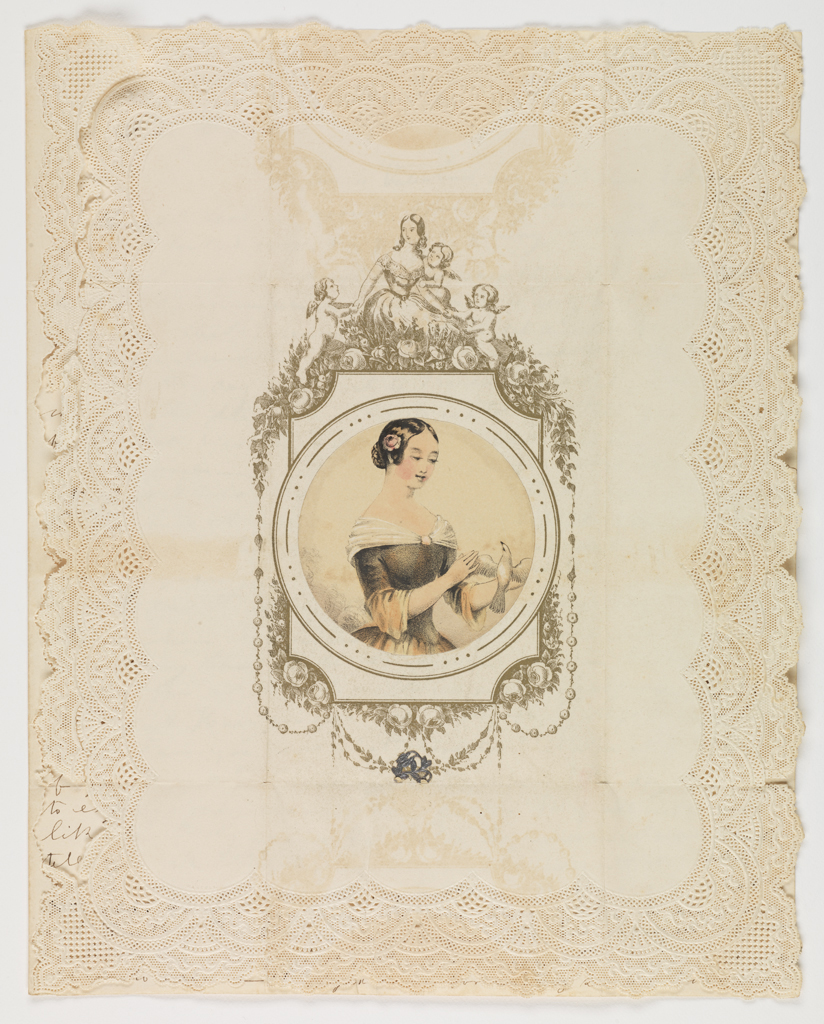 Victorian Valentine
Lacy cards and decorated envelopes were a popular style during the Victorian era. This card opens to two blank pages that could be filled with sweet nothings, family news, or gossip. The unknown sender of this card wrote, "As this is Valentine's Day and I have a holiday, I thought that I would spend my time in writing to you. I looked over a great many valentines but I could not get one to suit me exactly—so I had at last to get this one which I do not think is very pretty. Do you?" (VHS call number: Mss1 H7185 a2131-2132)
Image 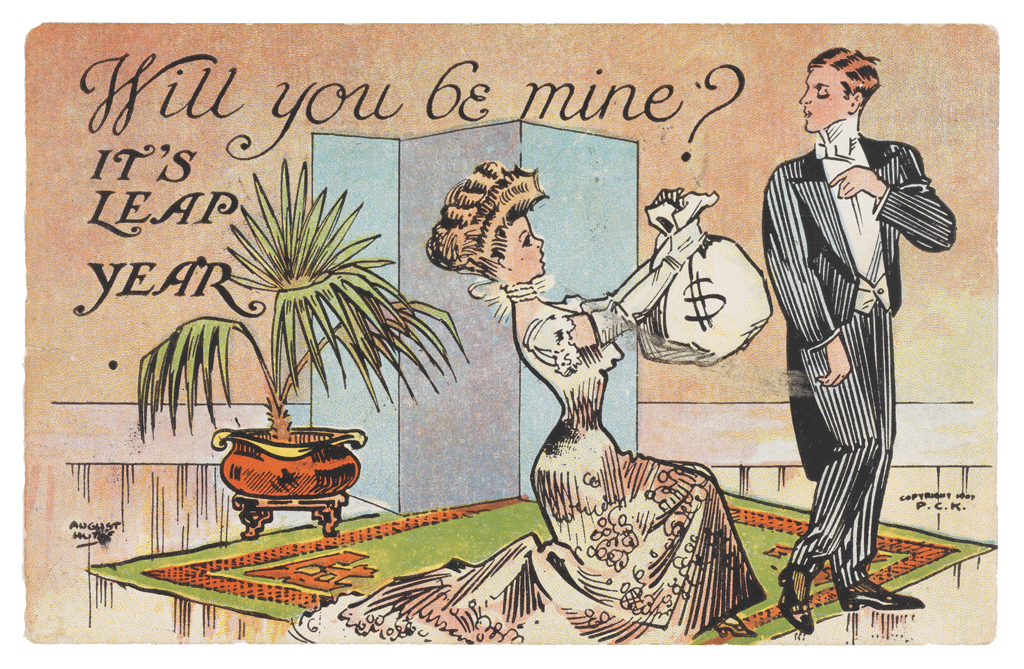 Will You Be Mine? It's Leap Year card
Traditionally, a leap year is the only time in four years when a woman can propose to a man. As one British author explained in 1872, "This being Leap Year, if a single gentleman receives a Valentine from a single lady, and can trace the sender through the Post Office, he will be entitled to consider her missive as equivalent to a proposal of marriage, and to accept it, if the lady can give satisfactory references as to property, connections, temper, accomplishments, and ability to manage a modern mansion." (VHS accession number: 2003.87.1)
Image

"For My Valentine"
At the beginning of the twentieth century, huge numbers of "comic" penny Valentines were sold in America. Inexpensive and brightly colored, they were a popular way to send greetings. Mary Custis Lee, daughter of General Robert E. Lee, sent this "mechanical" (it folds) Valentine in 1917 to her old friend, Leigh Robinson. She enclosed a flirtatious note and wrote, "Yes, many girls may be fond of you . . . but you must be true to one only, your Valentine, Mary Custis Lee!" (VHS call number: Mss1 G 1875 a 168-170)
Image 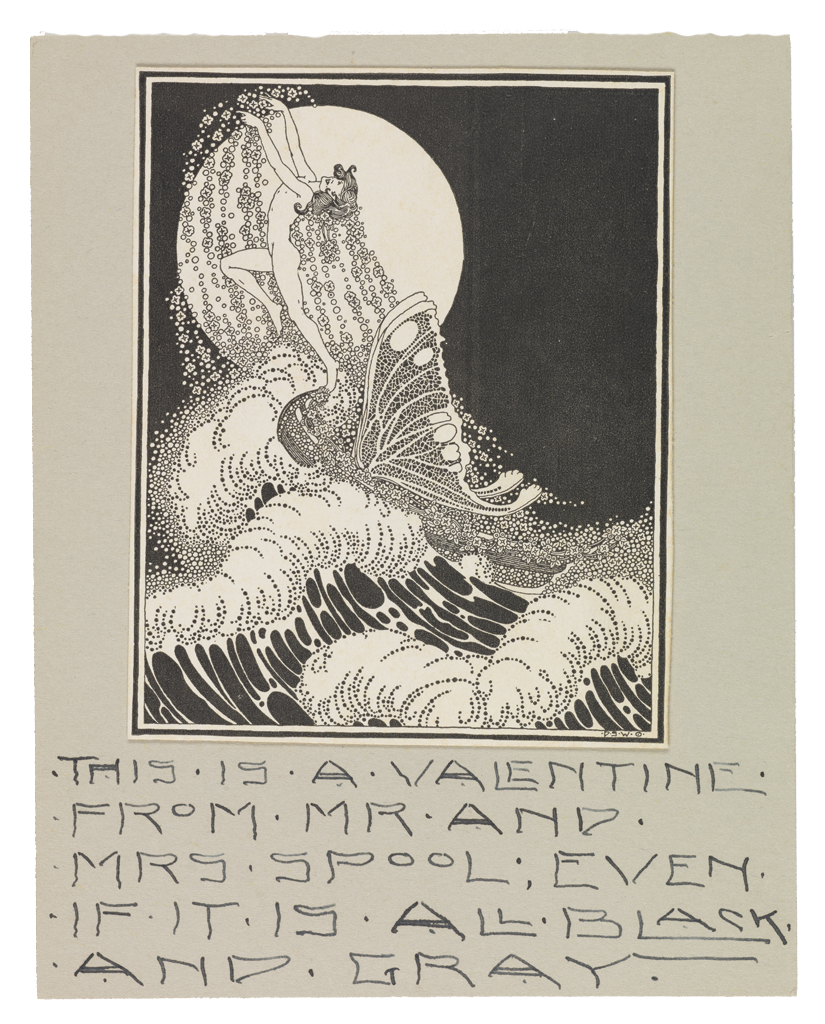 "This is a Valentine" by Dugald Stewart Walker
Dugald Stewart Walker (1883–1937) was a well-known Richmond illustrator and bookplate designer. He also applied his pen and ink to personal cards, such as this unusual card that he sent in 1931 to Kate and Thomas Jeffress of Chesterfield County. He wrote on the card that it was a Valentine "even if it is all black and gray." (VHS call number: Mss2 W1517 b)
Image 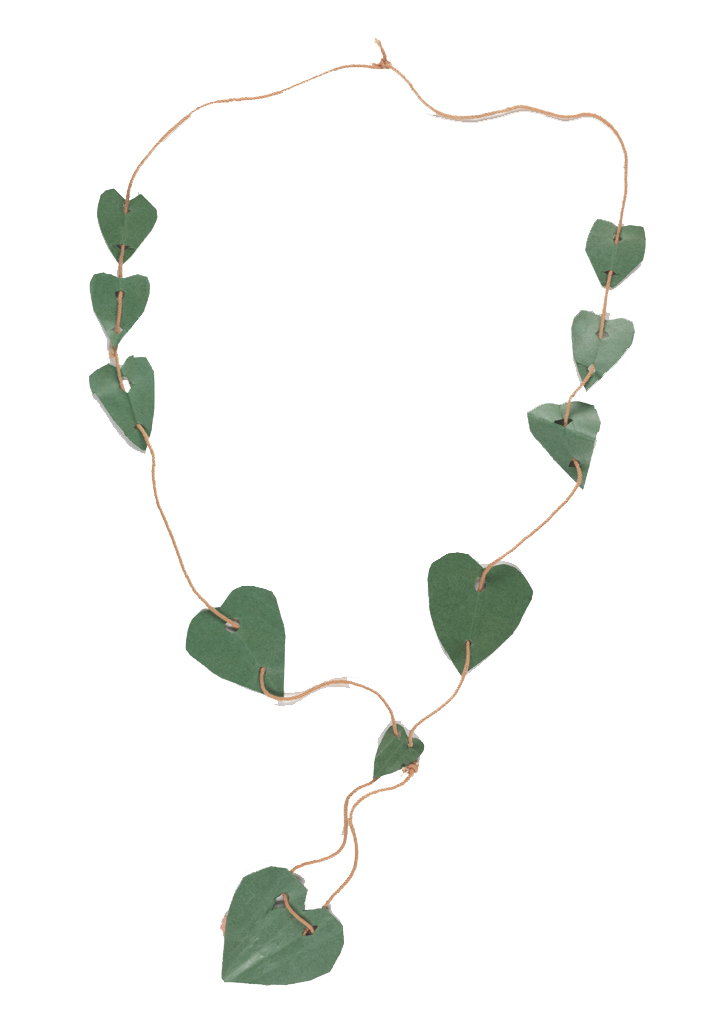 Valentine Necklace, 1924
Mollie B. McLaughlin received this handmade Valentine in 1924, probably from her fiancé, Pinckard Spessard Morton "Heck" Heckman. Mollie moved to Richmond from Dunmore, West Virginia, to work as a bookkeeper, and her letters offer a glimpse of what life was like for a single young woman during the Roaring Twenties. Heck died suddenly in 1931, and Mollie never married. But she kept her Valentine necklace made from green paper and twine. (VHS call number: Mss1 M2225 a 1921–1926)