The Virginia Home for Boys (now the Virginia Home for Boys and Girls) was founded in 1843 as the Richmond Male Orphan Asylum. John G. Wood and his wife, Bessie, co-superintendents of the home from 1929 to 1956, saved stacks of letters spanning decades as evidence of their monumental legacy. The correspondence includes career updates, wedding invitations, and birth announcements. But perhaps the Woods’ legacy is best seen in the letters they received from former residents serving in the military during World War II. 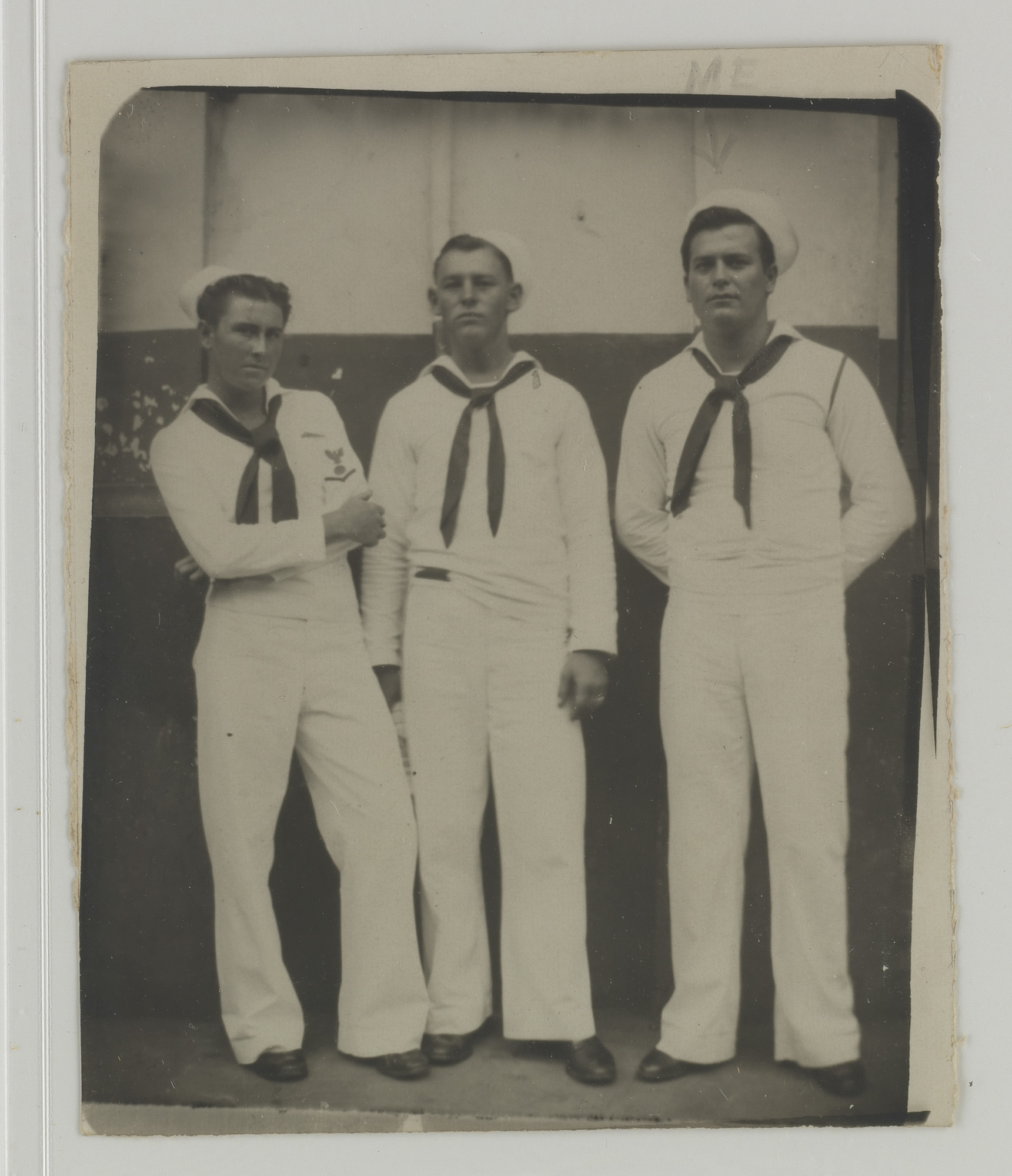 William R. Martin (right) included this photo in a letter.

From the Boys’ Home to the Service

The service flag that hung at the boys’ home during the war must have been quite the sight. Joseph W. Benninghove, a former resident, wrote to Bessie from his post with the U.S. Navy about the remarkable number serving from the boys’ home—by his count, some forty former residents had joined by 1943, each represented by a star on the Woods’ flag. “If many more go in,” he wrote, “you will have to get a new and larger service flag. I hope that no more gold stars have been and will have to be added.” Over the course of the war, men from the home were stationed everywhere—from New York to California, Panama, Great Britain, and the Philippines, and even Okinawa and Iwo Jima. Benninghove’s letter implies that at least one gave his life.

The experiences of the former boys’ home residents during World War II varied widely, though they often returned to themes from their shared childhood experiences. Some wrote letters only from domestic bases, like Wilson Brooking, who was stationed at Camp Somerset in nearby Maryland for the majority of the war. He expressed some frustration with his role, saying, “It seems that they just won’t let us get out and do any fighting.” He signed his letters, “One of your boys.” Others did see action abroad, like G. Herman Traylor, who wrote to Bessie Wood about witnessing important battles in the Pacific Theater. Carrying memories from the boys’ home overseas, Traylor recounted to Bessie, “We were subjected to a direct attack on the 21st of February—to tell the truth there was more fright in me then than it was when Mr. Wood and I visited the laundry room.”

“Hope for Peace and a Letter from You”

Distance from home and the pressure of military life during wartime inspired soldiers across the nation to write reflective letters home; for the former residents of the boys’ home, that meant writing to the Woods. Many asked about Bessie’s garden and wished her good health, passed along advice to boys at the home, and inquired about former residents. The content and the tone of the letters reflects the deep love and appreciation the boys held for the Woods and the brotherhood between residents. For many, at least, the boys’ home was a true family.

Men also frequently reflected that life at the boys’ home prepared them for military service. Several mentioned that they found their fellow soldiers lacking in the discipline, obedience, and work ethic they had learned in childhood. Most of all, nearly all of the letters express deep gratitude to the Woods for the lessons they imparted.

Earl R. Fox, who was made a squadron leader and operations officer during his time in the Navy, wrote:

“Words and advice you gave me seem to come in when I least expect it. Those times I came to you with my troubles, golly, you have no idea how they come back to a fellow when he is standing watch at night with nothing but your memories to keep you company.”

John and Bessie Wood were parental figures for hundreds of boys, many of whom took the lessons they learned at the boys’ home into military service at a critical point in history. Like many soldiers, they wanted to make the people back home proud, and they drew comfort and inspiration during the war from their communication with family.

Marvin G. Leigers, a pilot who served in England, expressed a commonly shared sentiment of wanting to make the boys’ home proud. He wrote, “If I can carry a few bombs to Tokyo or Berlin, I’ll feel that I’m doing just a little to repay all of you who have taken such an interest in me.” Judging by the number of letters the Woods saved over the years, it seems that they were pretty proud of their boys.

To read much more from the World War II letters or from one hundred and fifty years of history at the Virginia Home for Boys, visit us in the Research Library.

This article was written by Candice R. Candeto while serving as a library clerk at the Virginia Museum of History & Culture.

William P. Richardson served in the army and was stationed domestically during the war. He writes that he was relieved to have the Woods to lean on as he adjusted back to civilian life. (Mss3 V81954a Sect. 5, f. 5)

The first page of Traylor's letter.

The second page of Traylor's letter.

The third page of Traylor's letter.

The fourth and final page of Traylor's letter.