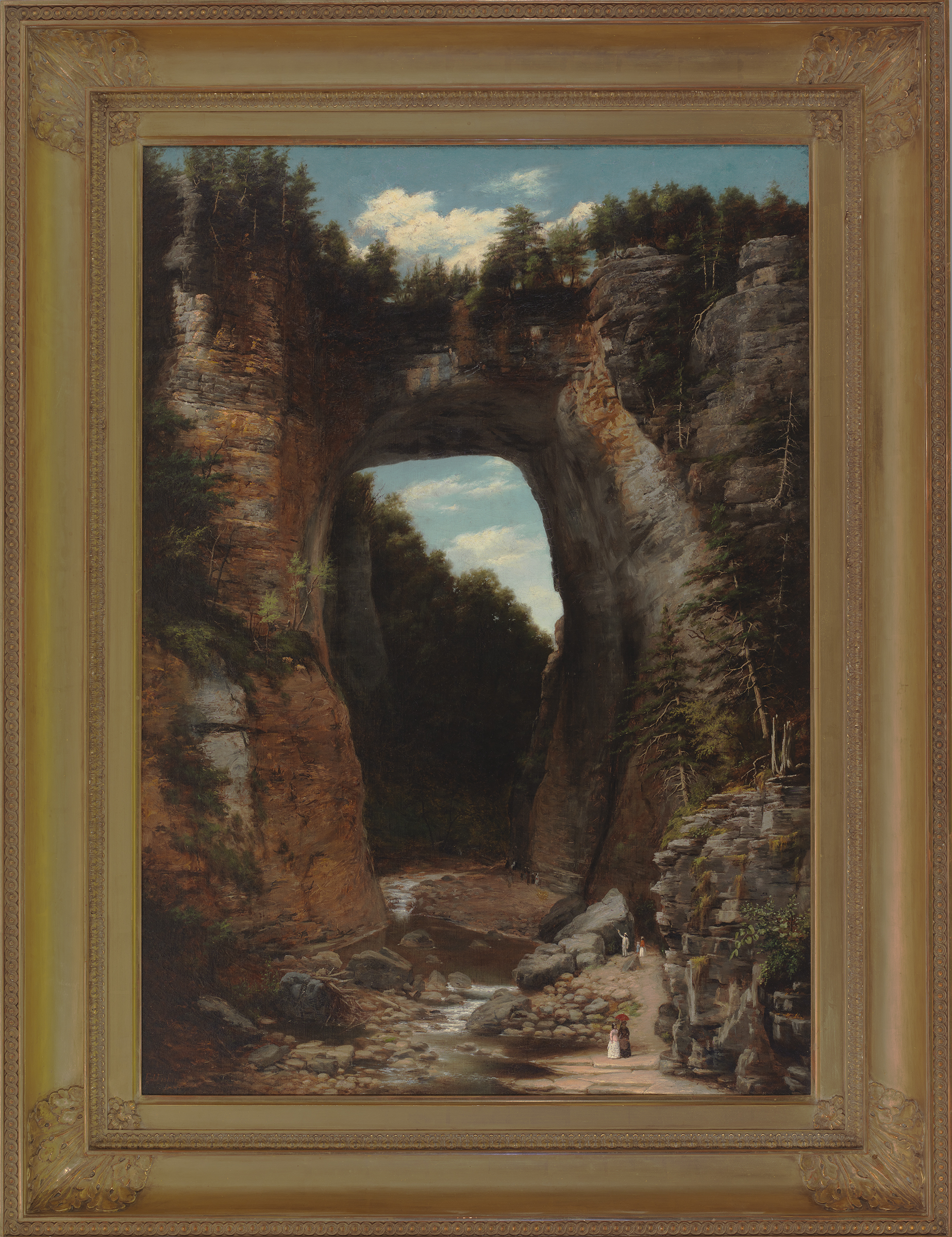 Natural Bridge, 1882, Flavius Fisher, Lora Robins Collection of Virginia Art (VMHC 1995.98). A traveler wrote in 1852 of “staring upwards in stupid amazement at so grand a work of the Great Architect.”

Thomas Jefferson wrote that Natural Bridge is “the most sublime of nature’s works”: “It is impossible for the emotions arising from the sublime to be felt beyond what they are here.” He purchased the bridge from King George III so that so potent a landmark would remain accessible to the public, and his exclamatory statements about the bridge’s intoxicating power were widely circulated when they appeared in his book, Notes on the State of Virginia (1785). The future president made Natural Bridge so famous that it was remembered a half century later by Herman Melville when the author described the sublime whale he created, Moby Dick. He wrote, “The fore part of him slowly rose from the water; for an instant his whole marbleized body formed a high arch, like Virginia’s Natural Bridge, and… the grand god revealed himself, sounded, and went out of sight.”

What did Thomas Jefferson mean when he reported “emotions arising from the sublime”? The explanation is that he had been reading Edmund Burke’s Philosophical Enquiry into the Origins of Our Ideas of the Sublime and the Beautiful (1757), which led the future president to search the Virginia landscape to find evidence of sublimity.

The British statesman-to-be Edmund Burke offered a philosophy about the landscape that guided connoisseurs and artists in Europe and America for more than a century. He labeled “beautiful” those things that are smooth, varied in form, or delicate, and induce in us a sense of affection and tenderness—like a rose or the bend of a swan’s neck. More relevant to the painter were those powerful forces of nature and those elements visible in nature that threaten our self-preservation and make us aware of the futility of human arrangements. 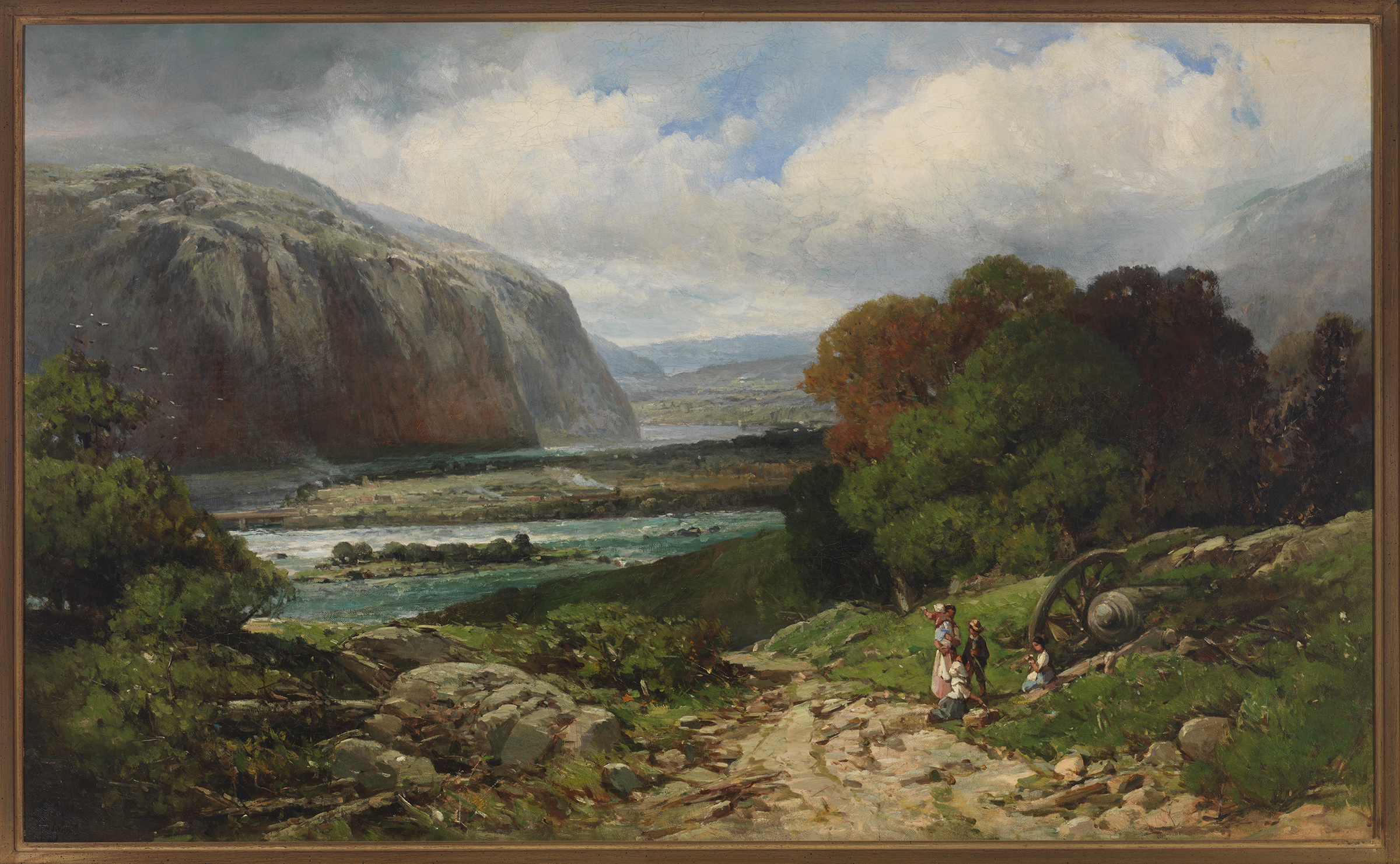 Near Harpers Ferry, 1870-80s, Andrew Melrose, bequest of Lora and Claiborne Robins (VMHC 2013.86.5). Melrose painted Harpers Ferry on a peaceful day, a decade after the Civil War had brought man-made destruction to the site. Jefferson no doubt saw Harpers Ferry at more dramatic moments, though probably less tumultuous than the times in 1936 and 1972 when hurricanes increased the quantity of water through the pass by multiples of 52 and 37. Those were unquestionably sublime moments.

Burke considered “sublime” the cataclysmic natural forces—tidal waves, tornadoes, hurricanes, conflagrations. Also “sublime” are extreme conditions that threaten our existence—such total stillness, total darkness, and death. Jefferson found that a human standing beneath the towering arch of Natural Bridge or peering down over its edge feels physically dwarfed and intellectually taken aback. He argued that such a landscape should be visited and it followed that it should be replicated in paint for those not able to see it on location.

Jefferson saw the sublime also at Harpers Ferry because he considered the passage of the Potomac and Shenandoah rivers through the Blue Ridge Mountains at that location to be “one of the most stupendous scenes in nature.” He imagined “a war between rivers and mountains, which must have shaken the earth itself to its center.” The sight of that battleground, he suggested, is “worth a voyage across the Atlantic [Ocean].” In Jefferson’s description the Potomac and Shenandoah rivers “rush together against the mountain, render it asunder, and pass off to the sea,” leaving “piles of rock on each hand.” 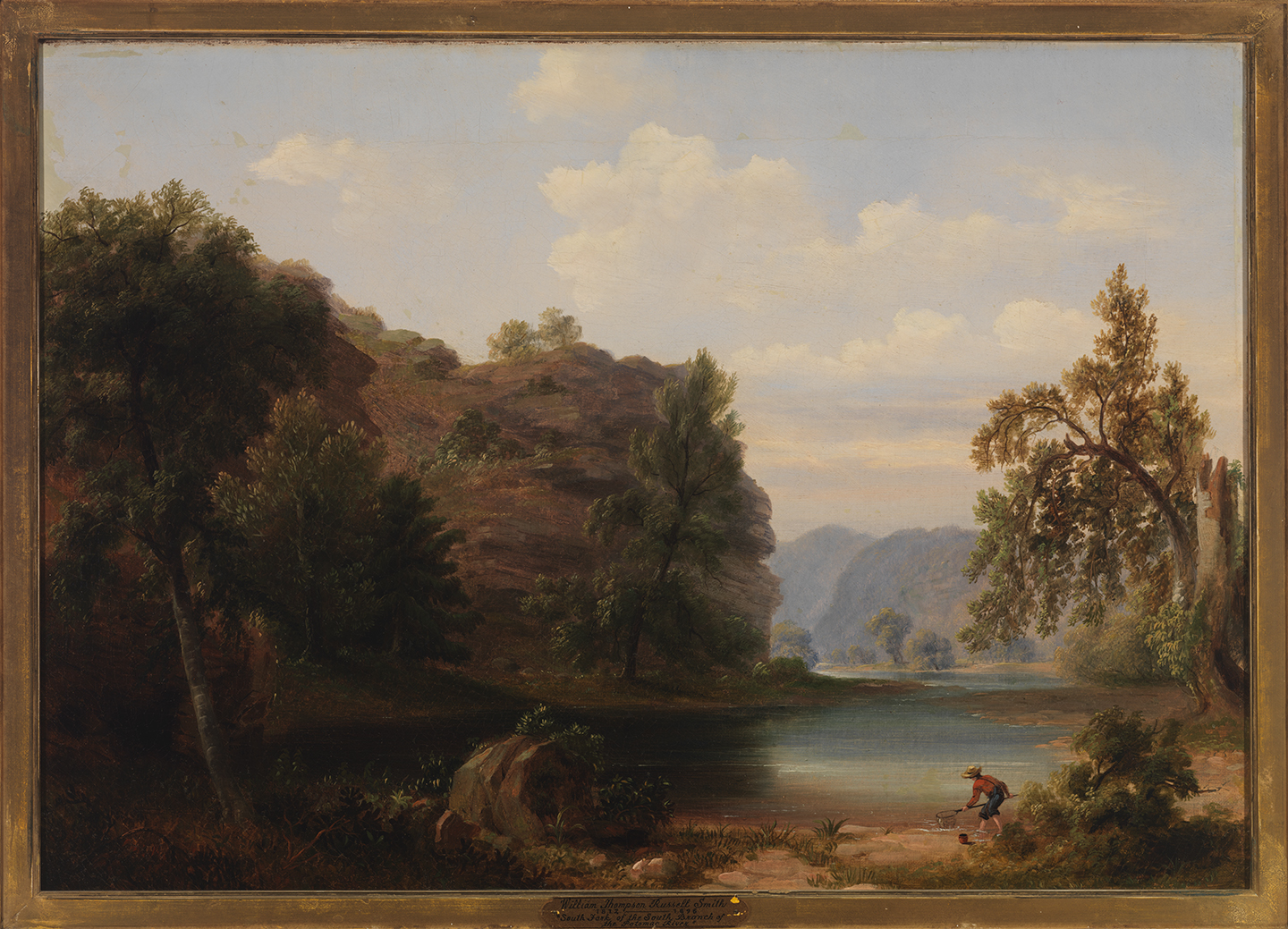 South Fork of the South Branch of the Potomac River, about 1848, Russell Smith, bequest of Lora and Claiborne Robins (VMHC 2013.86.1). Along the bottom of drawings that he made in the field, Smith jotted down notes that are evidence that he strove to be entirely accurate. However, in this finished oil painting derived from one of his field sketches, the artist altered the types, positions, and heights of trees, and he shifted landscape features in order to construct what he considered to be a proper finished painting in the tradition of the Picturesque (“looking like a picture”).

We know today that Jefferson’s scene of “riot and tumult” was less the result of rivers rushing to the sea, albeit their effect over an immense period of time is not to be dismissed, but more so it was the result of powerful geological forces beneath the surface 1000 to 1600 million years ago. Mountains were formed when rocks were pushed westward over the top of bedrock by enormous forces generated when land masses to the east were squeezed together.

Few landscapes, of course, are sublime. In most instances, if a landscape warrants our attention, it probably has “picturesque” elements in it. “Picturesque” means “like or suitable for a picture.”

The origin of the idea that a landscape could have such a quality lies with another author of the Enlightenment, the Reverend William Gilpin, who appreciated the wild and rugged mountain scenery of his native Cumbria in the far north of England. In his Essay on Prints (1768), Gilpin argued that a gentle scene with rough surfaces and irregular outlines can be as beautiful as those delicate forms in nature that Edmund Burke had identified, and he introduced the idea of “picturesque beauty,” by which he meant “that kind of beauty which is agreeable in a picture.”

Everyone knew that he was thinking of the landscapes that the famous seventeenth-century landscapist Claude Lorrain had constructed on canvas (these were well-known through print reproductions). The Frenchman structured his canvases like a stage set that has coulisses on either side, which serve to lead the eye, gradually and gently, through planes of spaces. On one side is a large and dark tree; a shadow extends across the land and defines the foreground. The middle plane is established by a second coulisse on the opposite side—perhaps a group of trees. The eye is lured across water through two additional planes, the second of which is distant and luminous. (An example of a Claude landscape can be in the painting Battle on a Bridge in the collection of the Virginia Museum of Fine Arts.) 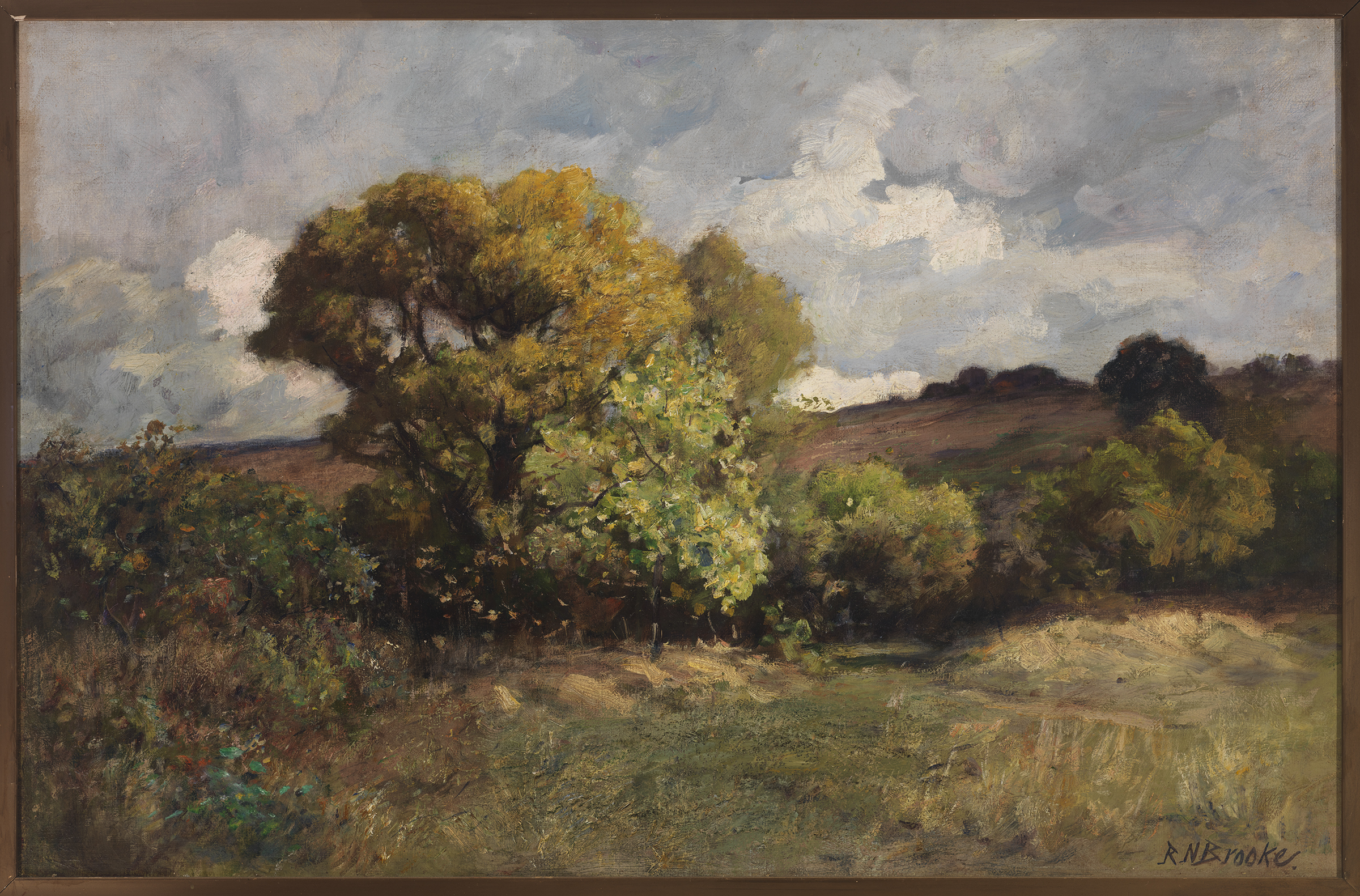 Virginia Scene, about 1910, Richard Norris Brooke, Lora Robins Collection of Virginia Art (VMHC 1996.28.6). Brooke found picturesque landscapes in northern Virginia. In an age of urbanization and industrialism he looked to find spiritual recovery in the beauty and cyclical patterns of nature.

Several decades after Gilpin’s essay, Uvedale Price, an English Baronet and amateur scholar, rejuvenated interest in the subject with his Essay on the Picturesque (1820). He refined the term to mean like a picture with interesting elements that are well composed. One of his American followers, Russell Smith, accompanied a geological expedition led by William Barton Rogers of the University of Virginia. Smith sketched west of Harrisonburg (close to the present West Virginia line). In the field he developed an interest in accuracy of detail and clarity of vision. However, when he returned to the studio to produce finished oil paintings developed from his drawings, Smith altered just about everything in order to transform his raw and honest landscape sketches into picturesque views—to make those images more “like pictures”—to turn landscape into art.

The surge of interest in the picturesque landscape was a manifestation of the nineteenth-century “worship of nature.” At this same time, the English poet William Wordsworth turned to the landscape, believing that “the passions of man are incorporated with the beautiful and permanent forms of nature” and that “One impulse from a vernal wood / May teach you more of man, / Of moral evil and of good, / Than all the sages can.”

Artists in France flocked to the village of Barbizon outside of Paris to look passionately at the changing moods of nature as they searched for traditional values and a simpler rural past. They believed that their picturesque landscape paintings would inspire proper values in viewers. Richard Norris Brooke of Warrenton, influenced by the Barbizon artists when he studied in Paris, returned to Virginia to look for picturesque scenery that he could paint that would offer inspiration and renewal. 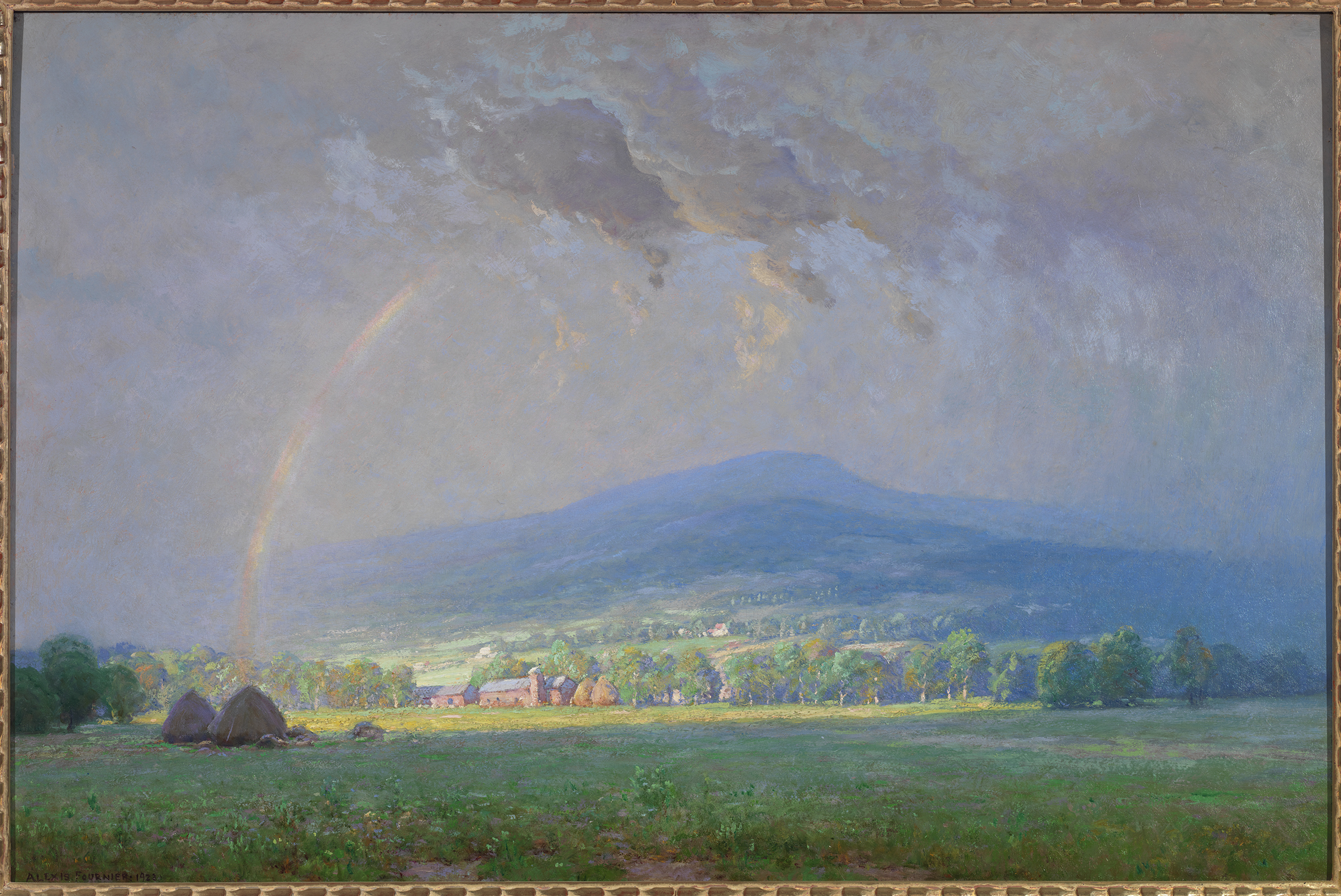 The Passing Storm, Shenandoah Valley, 1924, Alexis Fournier, Lora Robins Collection of Virginia Art, (VMHC 1996.172.2). Fournier arranged landscape elements to make this scene “look like a pleasing picture,” then he managed to convey his emotional response to the light, the coolness of the atmosphere, and the warm, radiant color that he saw in this setting—which is somewhere in Rockingham County or farther north.

More picturesque scenery is found in the Valley than in any other part of Virginia. It is there that landscape painters have most frequently traveled. This should be no surprise because from the start the travel literature has beckoned readers to visit this area of bountiful harvests, rainbows, ideal weather, and tranquility.

In 1760 Andrew Burnaby found there “the most delightful climate, and richest soil imaginable.” In 1854, William Gilmore Simms saw the “most perfect idea of Arcadia,” with “charms . . . to inspire the most perfect idylls,” where “the farmer may become the poet,” and where “thought, enlivened by the picturesque, may rise to a constant enjoyment of imagination.” In 1872, George Bagby wrote in Picturesque America that the Valley contains “literally a world of scenic beauties, ravishing to the artist, and inviting to even the dullest traveler or sight-seer.”

One artist who answered the call was Alexis Fournier, a Minnesota painter who had traveled to Paris in 1893, and who later brought the French Impressionist style of painting to the idyllic setting of the Virginia Valley. One of his works is among a group of picturesque landscapes from the Valley that are on display at the Virginia Museum of History and Culture in our Landscapes of Virginia exhibition. Come see them!

This article was written by Dr. William M. S. Rasmussen while VMHC Senior Curator of Exhibitions.