Virginia Survivors of the Titanic 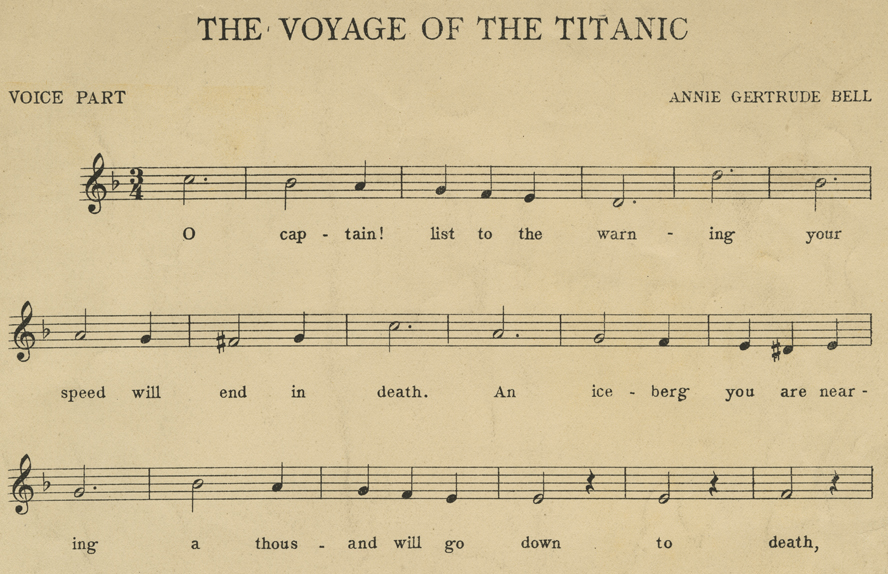 Detail of the sheet music for "The Voyage of the Titanic" by Annie Gertrude Bell, c. 1912. (Virginia Museum of History and Culture)

On the starry night of April 14, 1912, halfway through its maiden voyage from Southampton, England, to New York, RMS (Royal Majesty Ship) Titanic sideswiped an iceberg in the North Atlantic, and in the early morning hours on April 15th, it sank with a tremendous loss of life. The sleek, fast passenger liner—the largest in the world and deemed unsinkable by virtue of its size and modern construction—carried only enough lifeboats for less than half of those on board. In all, more than 1,500 souls perished.

The tragedy shocked the world at a time that, in retrospect, seems an Indian summer before the horrors of the Great War. Despite the passage of time since 1912, which has witnessed far greater calamities, the sinking of the Titanic retains its power to fascinate and appall.

The event naturally generated enormous press coverage and drove newspapers to badger the slightly more than 700 survivors for eyewitness accounts. One of them was a twenty-eight-year-old Virginia-born banker, Robert W. Daniel. Thirty telegrams and one letter sent to Daniel’s relatives in Richmond are in the Virginia Museum of History and Culture collection and give a glimpse into his ordeal. The earliest, a telegram sent by Daniel when the ship stopped at Cherbourg, France, cryptically told his family he was “On Board Titanic.”

Within a week, half a dozen other cables followed to let family know that Daniel had survived, having been picked up more dead than alive by RMS Carpathia. An accomplished swimmer, he had jumped overboard after the lifeboats were lowered and was apparently pulled, unconscious, into a small canvas-sided collapsible boat from the Titanic.

On the way to New York, he befriended another survivor, Eloise Hughes Smith, who had been widowed by the sinking. They married within a year. In contrast to his willingness to speak to reporters in 1912, in later years Daniel refused to talk about the experience. Perhaps it was the traumatic nature of the event, or it could have been related to the stigma that many males felt as survivors.

After the Titanic disaster, Daniel returned to the banking business. He eventually moved back to Virginia, purchased the historic Brandon-on-the-James, and became a gentleman farmer. He married several times over the course of his life and had one son. He went on to serve in the Virginia Senate. Daniel died in 1940 and is buried in Hollywood Cemetery in Richmond.

THE WESTERN UNION TELEGRAPH COMPANY
Received at No. 1217 East Main Street, Richmond, Va.
54 RD W 26, Duplicate.
sx, New York April 18,12
Mrs. James R Daniel,
1001 Floyd Ave, Richmond, Va.
Will you or any member of family meet Robt W Daniel reported on
board Carpathia due tonight if so at what hotel can you be seen.
Newyork Sun.
406 PM
(Virginia Museum of History and Culture, Mss2 D2235 b)