Throughout the war, both sides sought a single decisive victory long after it was clear that no such event was achievable. In the battles of the Overland Campaign—Wilderness, Spotsylvania, North Anna, Cold Harbor—fighting continued as both sides attempted to justify the 70,000 casualties incurred in just thirty-nine days. “I had seen dreadful carnage in front of Marye’s Hill at Fredericksburg,” wrote one Confederate, “but I had seen nothing to exceed this. It was not war; it was murder.” Although United States general Ulysses S. Grant was called a butcher, Confederate losses, relative to the size of their army, were greater. The unprecedented bloodletting only came to an end in the trenches around Richmond and Petersburg, where manpower and the material advantages of the North stretched Confederate resources to the breaking point.

By 1864, veteran soldiers learned to appreciate the advantage of earthen defenses to protect themselves from enemy bullets. Survival came to depend as much on picks, shovels, and axes as on firearms. Tin cups, plates, and other improvised objects—like this bayonet—became digging tools. 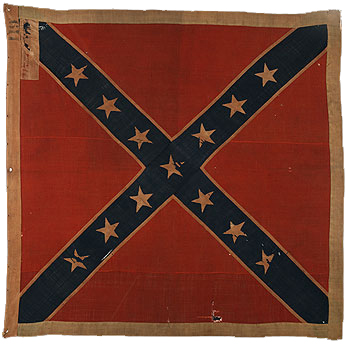 Instead of using a traditional assault formation, the 6th Corps employed a deep but narrow formation to break through the Confederate lines. The attacking federal soldiers were ordered to advance without pausing to fire.

As the United States soldiers smashed through the Confederate position, Paradise seized this Confederate battle flag—a prized battlefield trophy—from a Georgia infantry unit. Paradise survived the charge at Spotsylvania that claimed one-fifth of his comrades. A month later, he was killed in battle at Cold Harbor.

One of the World's Great Seaports

Serving as a supply base for the U.S. armies near Petersburg, the tiny village of City Point (now part of Hopewell), became one of the busiest ports in the world almost overnight. Capable of supporting an army of 500,000 men, the scale of the supply depot at City Point was unprecedented in military history, and critical to the success of the campaign to capture Petersburg and Richmond.