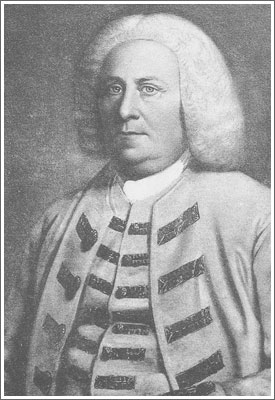 Robert Dinwiddie's name is little known today, but this Scottish merchant-turned-government official played a key role in the history of Virginia, and in the larger world conflict called the French and Indian (or Seven Years') War.

Appointed lieutenant-governor of the colony (the absentee governor's personal appointee directly responsible to the British crown and ministry), Dinwiddie arrived in Virginia in late 1751 and served through early 1758. Facing the challenge of French incursions into the frontier regions of North America claimed by the British, he promoted a young surveyor named George Washington, naming him to deliver a warning message to French commanders in 1753 and then appointing him to command the First Virginia Regiment. Washington's actions against the French on the Virginia frontier would help to ignite a conflagration that would change the western world forever.

Records of the Dinwiddie Administration

Surviving records documenting the career of Robert Dinwiddie as one of Virginia's most influential lieutenant-governors are scattered through numerous repositories in America and Great Britain. But an extraordinary collection of manuscripts relating to his service was assembled during the middle nineteenth century by the famous English autograph collector Henry Stevens. When it was offered for sale at auction in the early 1880s, W. W. Corcoran, a prominent American banker and collector in his own right, secured the papers and donated them to the Virginia Historical Society (today, the Virginia Museum of History & Culture), an organization of which he was then vice president. The Society (VHS), recognizing the collection's immense value as a historical resource, commissioned its corresponding secretary, Robert A. Brock, to produce an edited version of the documents, with annotations and transcriptions of some additional, related documents from other sources. That two-volume work, The Official Records of Robert Dinwiddie, Lieutenant-Governor of the Colony of Virginia, 1751–1758 (1883), has provided the primary access to this collection for more than a century.

Contents of the Collection

The Robert Dinwiddie papers consist of twenty-two separate items. These include four letter books, which contain contemporaneous copies of letters written by Dinwiddie as lieutenant-governor from the date of his arrival in Virginia in 1751 through his retirement from office in 1758. These copies were made by clerks in the governor's office, but also include emendations in the hand of Dinwiddie himself. More than 900 in number, the letters provide a remarkable window on the administration of Great Britain's largest, wealthiest, and most influential North American colony. They focus squarely on the coming and early years of the war against France and its Native American allies on the colonial frontier. In addition, the collection includes seventeen letters written by George Washington, then a young militia officer, between March 1754 and April 1756, primarily to Governor Dinwiddie, as well as a contemporary record of a court martial of a Virginia militia officer in 1756 related to wartime events on Virginia's western frontier. Frank Grizzard, former senior associate editor of the Papers of George Washington, describes this collection of Dinwiddie's papers as "the foundation of our understanding of the American colonial experience during the early years of the French and Indian War."

Restoration of the Collection

Given the significance of this collection, its restoration had long been a goal of the VHS, one that garnered the support of the Save America's Treasures program jointly administered by the National Park Service, the National Trust for Historic Preservation, the National Endowment for the Humanities, the National Endowment for the Arts, the Institute of Museum and Library Services, and the President's Committee on the Arts and the Humanities. The funding provided by this initiative has enabled the VHS to share selected documents and interpretive information with visitors.

This is the second project undertaken by the VHS with funding from Save America's Treasures. During the inaugural year of that program, the Society received financial support to restore a major collection of Custis Family Papers, which also featured significant amounts of material relating to George Washington, as well as to his wife, Martha (Dandridge) Custis Washington.