Who Was the Traitor and Who the Patriot?

In 1776, George Washington rebelled against the established government of his day. We remember him as a patriot, but to his king and fellow colonists loyal to the king, Washington was the traitor and Benedict Arnold was the patriot.

In 1861, pro-Union supporters defended the nation that had been created in 1776. Pro-Confederates said they were exercising the right, enshrined in the Declaration of Independence, to “alter or abolish” unrepresentative and oppressive government. Wherever a Virginian placed his or her loyalty—to the rebel nation of 1776 or the new rebel nation of 1861—he or she was a patriot in the eyes of some and a traitor in the minds of others.

Do You Know This Man? 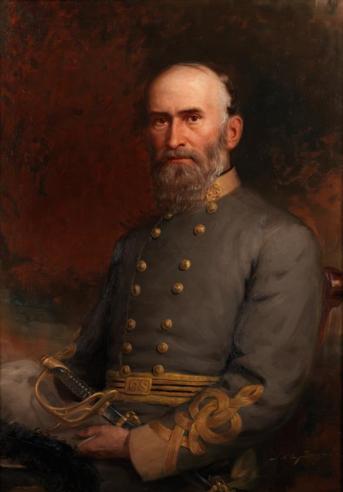 Jubal Anderson Early, a profane army officer-turned-lawyer, argued strongly against disunion at Virginia’s 1861 convention, and even after Lincoln’s call for troops, he was among fifty-five delegates who voted against disunion on April 17. Why is he wearing a Confederate uniform?

Former congressman John Minor Botts called himself "a Southern man with National principles." He failed to prevent secession, then retired to his Richmond home. There he was arrested and imprisoned for openly challenging the legality of the Confederacy and accused of writing a treasonable "secret" history of secession. A search of his home failed to produce the seditious manuscript. After his parole, Botts moved his family to Auburn, a farm in Culpeper County, where he later unveiled his book, The Great Rebellion, its Secret History, Rise, Progress, and Disastrous Failure!

Where is My Sword?

If Judith and Fanny Thomas owned a portrait of their brother George, no doubt they took it down.

In 1848, residents of rural Southampton County had presented Lt. George H. Thomas with an engraved silver sword for gallantry in the Seminole and Mexican wars. He wore it only once—at his 1852 wedding to Frances Kellogg of Troy, New York. Some blamed her for his later pro-Union stance. Because of his army travels, he left the sword in the care of his sisters in Virginia.

In April 1861, Thomas chose to remain in the United States Army. His sisters disowned him. His letters were returned unopened and his appeals for the return of the sword ignored. Judith Thomas wrote that he "had been false to his state, his family, and to his friends." They were never reconciled to their brother, who died in 1870.