Founding Frenemies: Hamilton and The Virginians 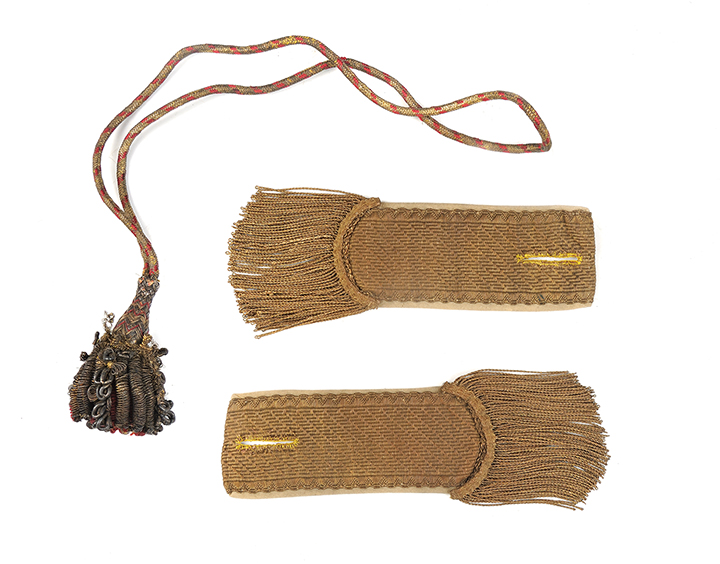 Col. Alexander Hamilton’s field epaulets and sword knot, late 18th century (Image courtesy of The Society of the Cincinnati, Washington, D.C.). At Yorktown, George Washington gave Hamilton the field command that the young lieutenant colonel had fervently requested. Hamilton is said to have worn this pair of field epaulets and sword knot—a device for securing a sword to an officer’s hand—during the Revolutionary War.

Founding Frenemies: Hamilton and The Virginians, on exhibition at the VMHC in 2019, examined how critically important relationships between Alexander Hamilton and three Virginians shaped the character of the United States, its founding institutions, and patterns of civil discourse that are still felt today. The protagonists in Founding Frenemies were four of the Founding Fathers. George Washington was Hamilton’s greatest friend and greatest supporter. Thomas Jefferson and James Madison were two of Hamilton’s greatest political enemies. The exhibition was inspired by the content of the popular Broadway production, Hamilton: An American Musical. Ten songs from the musical are brought to life through rare artifacts.

Founding Frenemies opened when a traveling production of Hamilton came to Richmond and Norfolk, bringing heavy publicity to the story. But, regardless of the popularity of the Hamilton story today, there is good reason to present an exhibition about him. Much of his story involves Virginians. Among the millions of objects in the museum’s collection are letters by Hamilton that relate to both the Revolutionary War and his accomplishments as secretary of the treasury; letters by his Virginia friends and foes that illustrate the immense political divide in the 1790s; and period books and newspapers that bring to life such major episodes in the Hamilton story as his report on the national bank, his “observations” regarding the Maria Reynolds scandal, and his defense of the Treasury’s policy with Dutch loans. 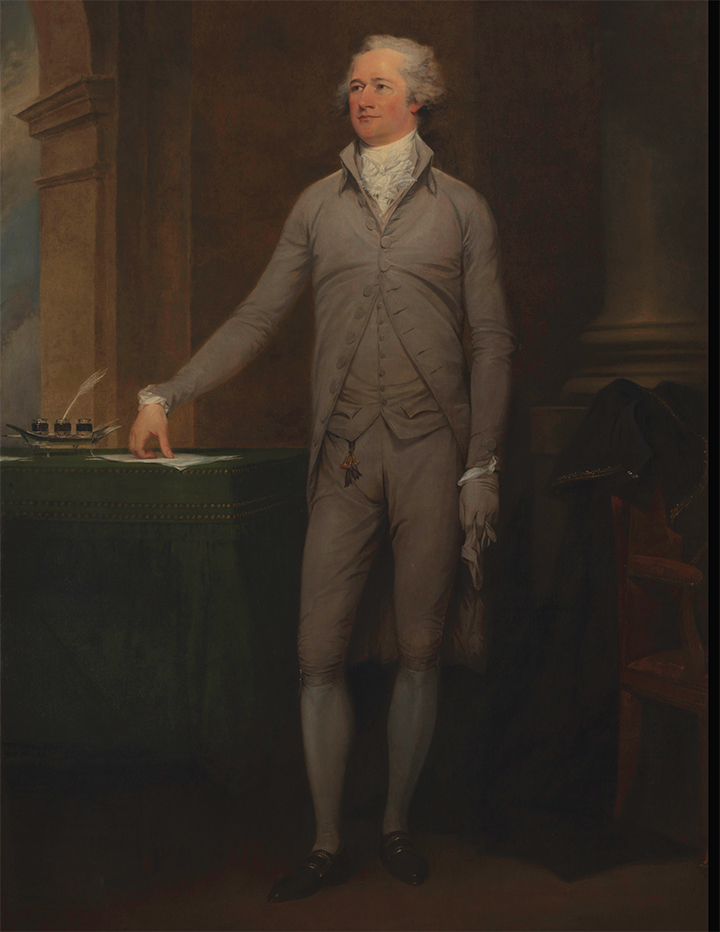 The exhibition offered a rich analysis of Virginia history during its most renowned period, the era of the Founding Fathers. As with the VMHC exhibition, John Marshall: Hidden Hero of National Union, this show broadens our understanding of the “Virginia Dynasty”— of presidents George Washington, Thomas Jefferson, James Madison, and James Monroe. All of those figures interacted frequently with the Federalists Hamilton and Marshall.

Hamilton’s important service during the Revolutionary War is illustrated by one of the many letters he wrote for Washington while serving as the general’s top aide (his “right-hand-man”). Display of his field epaulets and sword knot bring to life the story of his heroism at the battle of Yorktown. A map of British fortifications, published in 1782, identifies the strategically critical British Redoubt No. 10 that Hamilton and the 400 infantrymen stormed.

A rare period printing of Hamilton’s Report. . . on the Subject of a National Bank introduces Hamilton’s dynamic financial policy that paid America’s enormous war debts while it established public credit and a thriving economy. A $100 note from the Philadelphia branch of the National Bank, dated 1793, is included in the exhibition. Hamilton’s Federalist policies launched a venomous feud between him and his Republican enemies, Jefferson and Madison. They distrusted banks (and were indebted to ones in England and Scotland) and rightfully saw that Hamilton was beginning a transfer of power from the states to the federal government, which would be followed by economic loss for the southern states and a diminution of states’ rights. 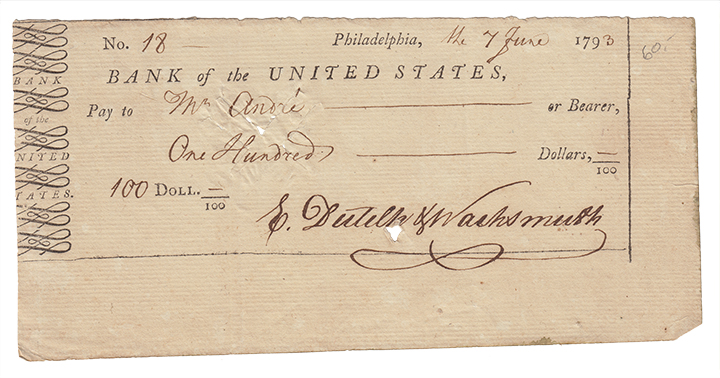 Jefferson’s search for “dirt on Hamilton”— a payback for Hamilton’s success with seemingly pro-northern financial policies — was the first concerted attempt in American history to expel a cabinet member for official misconduct. This conflict is illustrated by blatant attacks on Hamilton by Jefferson and Madison and was recorded on the pages of the National Gazette, a Republican newspaper. The Virginians unfairly accused the treasury secretary of lacking authority to take out loans from Dutch banks and of corruption.

The first major extramarital scandal in American history (“the Reynolds Seduction”) is illustrated by a copy of the pamphlet written by Hamilton himself who, in an attempt to combat accusations of corruption and preserve his reputation, publicly confessed the affair.

The shift of the U.S. Capital from New York City to the Potomac River, the result of a deal worked out between Hamilton, Jefferson, and Madison that gave Hamilton his National Bank, is illustrated by a 1792 map of the proposed, and soon built, city of Washington.

The cabinet debate between Secretary of State Jefferson and Treasury Secretary Hamilton regarding President Washington’s neutrality stance, and later his Jay Treaty with England — and Jefferson’s proposed alliance with revolutionary France — is addressed in a letter written by Hamilton that references the seizure of American ships in the Caribbean. 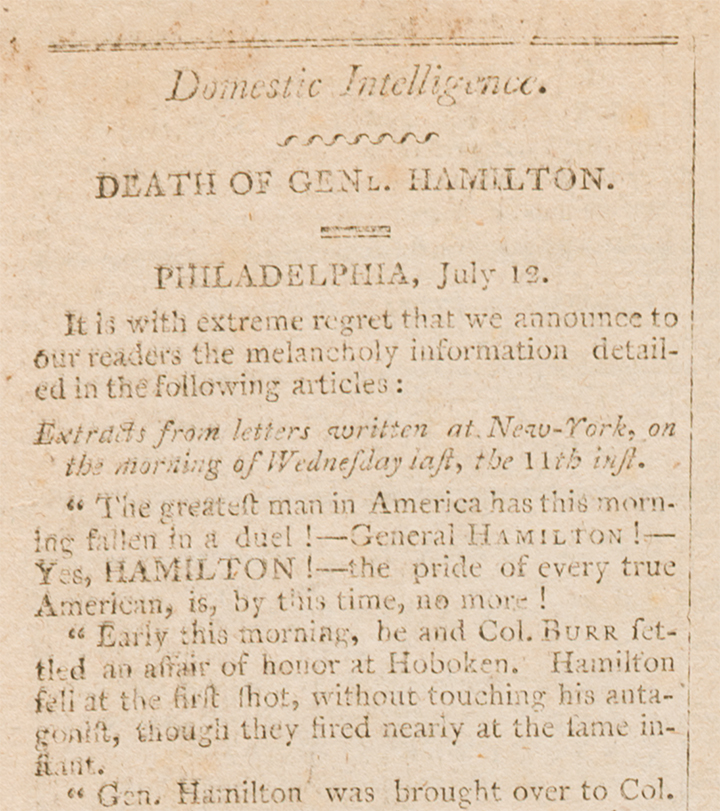 Washington’s “Farewell Address” was never read but instead was printed in newspapers. This exhibition featured a rare copy of a Boston paper that includes one of the first printings of the address. The ideas in the address were all Washington’s, but the words, certainly the majority, were Hamilton’s.

In the election of 1800, vice-presidential candidate Aaron Burr received the same number of electoral votes as did his running mate, Thomas Jefferson. Burr then attempted to steal the presidency for himself. Hamilton intervened to sway Federalist votes and give the presidency to Jefferson, his arch enemy. This turning point in American history was momentous. The exhibition displayed a letter by Jefferson and examined the reasons Hamilton supported him.

At the conclusion of the exhibition, viewers will be able to read in the Richmond Enquirer of July 21, 1804, reports of Hamilton’s death at age 49, following his fatal duel with Aaron Burr. Life-size bronze statues of Hamilton and Burr, with dueling pistols aimed at one another on display in the museum’s main entrance, recreated the fatal duel and transported guests—at least in spirit—to the eventful era that was the early republic.