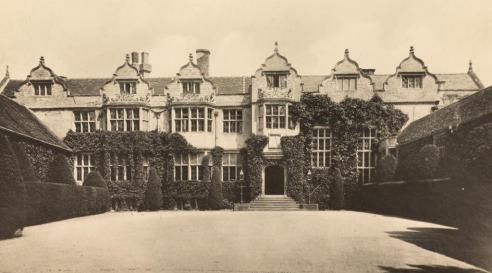 The Priory of the Augustinian Order of the Holy Sepulcher of Jerusalem was established by Henry de Newburgh, first earl of Warwick, in 1109. The building that housed the order was completed sometime around 1119. Warwick was the seat of all the Holy Sepulcher houses in Britain and enjoyed a golden age for close to a century. 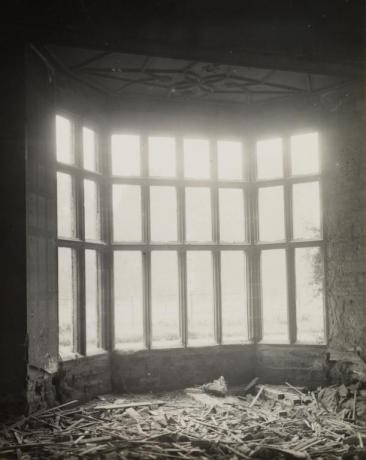 When Henry VIII broke from the Catholic Church in 1536, he confiscated the priory at Warwick. The hundreds of monasteries and nunneries that were closed throughout Britain in the sixteenth century were sold to the king's favorites. The first owner of the priory was Thomas Hawkins, alias Fisher, a fishmonger, who acquired the building and lands during the short reign of Edward VI. Fisher later purchased much of the land surrounding the priory and eventually dismantled most of the monastic buildings and built a house he called "Hawk's Nest," set in a landscaped park. It was at his Tudor manor house that Fisher entertained the newly crowned Elizabeth I. The curvilinear Dutch gables were added to the front façade around 1620, during the reign of James I. The fortunes of the priory at Warwick rose and fell with its subsequent owners, among whom were Henry Wise, royal gardener to Queen Anne, who acquired the house in 1709. The Lloyd banking family bought the priory in the mid-nineteenth century but were forced to sell it in the early part of the twentieth century.

In 1925, Alexander and Virginia Weddell bought the priory at a demolition sale. The Weddells had the house dismantled and rebuilt part of it in Richmond, Virginia, where they hoped the west wing would serve as a museum for the Virginia Historical Society. They planned that the remainder of the house would one day serve as the society's headquarters. With these plans in mind, in 1929 the Weddells deeded Virginia House to the VHS and maintained a lifetime tenancy for themselves. 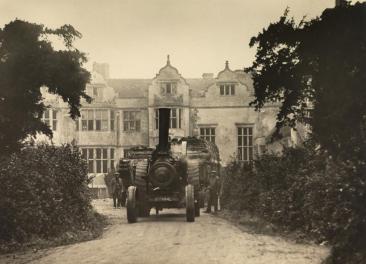 The company that was to demolish the priory felt the stones would crumble in the process, so they decided to make a small explosion in the middle of the building and send only those stones that survived the blast to America. To their amazement, most of the stones fell intact. The more fragile ornaments were packed in boxes with sand to cushion them. The ship bringing the stones to America had to turn back to port as it was taking on water. Consequently, when the stones arrived in Richmond they were soaked in seawater and had to be washed and dried. The first group of stones arrived in Richmond in the spring of 1926. The stones were stored and sorted in a barn on the corner of Massie and Canterbury roads in Windsor Farms over a period of six months.

The west wing of the house is, on the exterior, a replica of Sulgrave Manor, a submanorial house in Northamptonshire, England, belonging at one time to Lawrence Washington, an ancestor of America's first president, George Washington. The center section of the house is a reproduction of the priory in Warwickshire, England. This priory section exhibits the curvilinear gables that the English adopted from the Low Countries in the early seventeenth century. The strapwork design seen on the parapets and on the exterior and interior balustrades was also imported from the Low Countries. Wormleighton Manor, a Spencer-Churchill family estate in England, was the model for the east wing. The architect of Virginia House was Henry Grant Morse, who was primarily a designer of public buildings. Morse traveled in the English countryside with Mr. and Mrs. Weddell as they looked for a model for the house they hoped to build in Windsor Farms. 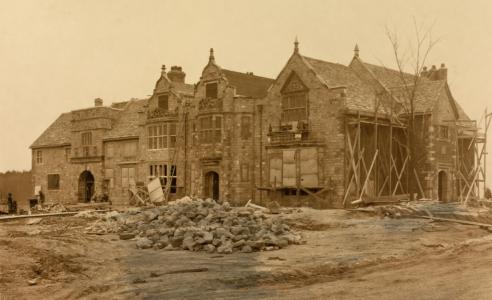 William Lawrence Bottomley designed the loggia, incorporating columns imported from Spain on the south side. The painted ceiling in the loggia came in part from a sixteenth-century house that once stood on the site of Knole in England. A frieze of old tiles on the walls of the loggia illustrates the early use of gunpowder. The roof of the loggia is a belvedere from which the visitor can have a view of the gardens of Virginia House and the historic James River beyond. Beyond the loggia, the east wall of the west wing bears mason's marks from various periods, some surviving perhaps from the original priory. A porch, built after the completion of the main house, extends from Mrs. Weddell's bedroom. Mrs. Weddell would retreat to her porch on hot summer nights to catch the breezes from the river and, in the morning, she and Mr. Weddell would have breakfast served to them there.

Virginia House was completed in 1928, and in 1929 it was deeded to the Virginia Historical Society with the Weddells retaining lifetime tenancy. Virginia House became the sole responsibility of the VHS in 1948 after Ambassador and Mrs. Weddell, and Mrs. Weddell's personal maid Violet Andrews, were killed in a train crash on New Year's Day.

Today Virginia House is owned and operated by the Virginia Historical Society. The site is available for facility rentals and special events.