When artists were hired to illustrate written accounts of events in Virginia, they did not aim to make realistic representations, but to vivify the narratives. Their engravings used European pictorial conventions and generic landscapes, and when the artists borrowed details from other prints, those details sometimes were authentic but often not.

In 1617 the German printer Abelius engaged the artist Georg Keller to illustrate his translation of Ralph Hamor's A True Discourse of the Present State of Virginia. Hamor's original 1615 London edition had no pictures to copy, so Keller created imaginary scenes, drawn from descriptions in the written narrative. Some details in the pictures derive from the 1590 de Bry prints, but not all. Johann Theodore de Bry, the son and successor of Theodore, issued his translation of Hamor's Present State of Virginia in 1618, in America, Part 10. For illustration, de Bry directly copied Keller's invented pictures (though he flipped them from left to right). 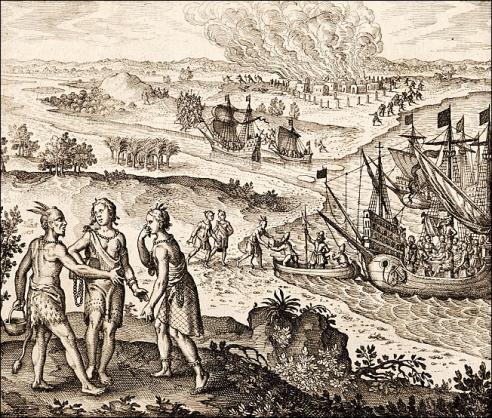 The abduction of Pocahontas

The artist has merged events of 1613 along the Potomac River, shown in the foreground, with events of 1614 on the York River, shown in the background. At lower left, Pocahontas (center) is deceived by Iopassus, holding his reward of a "small Copper kettle," and Iopassus's wife, who feigns "counterfeit tears." After Pocahontas consents to accompany them onto the English ship, they prepare to enter the boat, and then they sit at supper aboard ship, "merry on all hands." The events in the background take place following the capture of Pocahontas, and after an English offer to exchange her for captives and weapons. In March 1614, having received only a partial response from Powhatan, English ships move up the York River. Met with "great bravado" and then flights of arrows, the English attack and burn an Indian village. 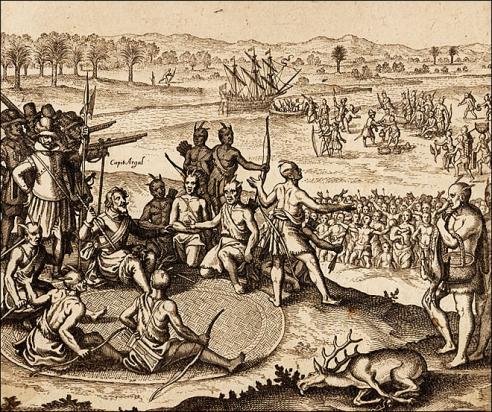 Seated on a mat, Captain Samuel Argall negotiates a treaty with the Chickahominy, who were somewhat independent of Powhatan and ruled by a council of elders. One of the elders speaks to the gathered Chickahominy about the treaty, and a killed deer and two birds are presented at lower right. In the background, the colonists receive the benefits of peaceful relations, tribute and trade. 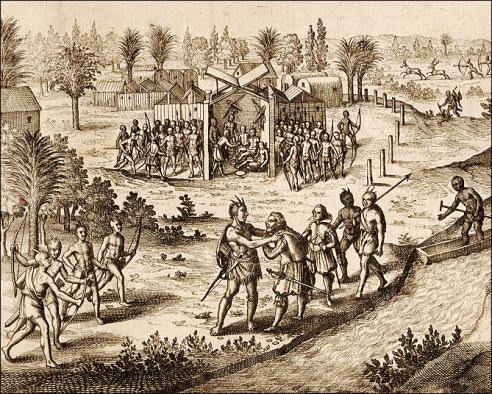 In May 1614 Ralph Hamor, the interpreter Thomas Savage, and two guides visit Powhatan's town on the Pamunkey River. In the foreground Powhatan feels Hamor's neck for "the chaine of pearle" Powhatan had given Thomas Dale to designate the English envoy. In the background at center, Hamor has an audience with Powhatan at his house, surrounded by Powhatan's guard. After presenting gifts, Hamor asks if Dale can have Powhatan's youngest daughter as "his neerest companion, wife and bedfellow." Powhatan refuses the request. Left of the house, an Englishman stands with Indian men, perhaps a representation of Hamor finding William Parker—a colonist lost for three years—among the Indians. In this image, the artist's invented details include the spear, the design and materials of the houses, and the tropical trees. 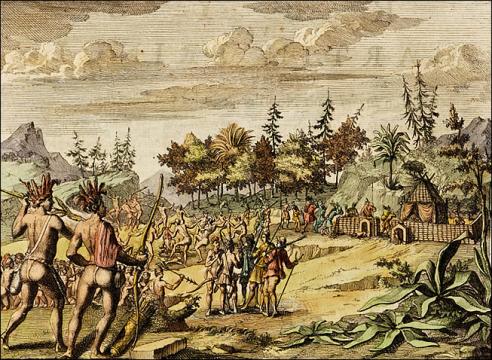 Martin Pringe captained a voyage to "the North part of Virginia" in 1603 for merchants of the city of Bristol, exploring the coast of New England and returning with a cargo of sassafras and a bark canoe. In this narrative illustration, the artist has adapted details freely and wholly invented the scene. The attire of the Indians and the vegetation both resemble features of more southerly regions.