In 1493, Columbus wrote a letter about his discoveries that was translated and published across Europe. That report opened a period in which the New World became a subject of great interest to Europeans. Especially fascinating were the indigenous peoples. The name "Indians" derived from Columbus's belief that the islands he found were in the Indian Ocean and was used in England as early as 1553.

Europeans learned about the Virginia Indians through both words and pictures. Yet as important as the writings of explorers and colonists were, the most powerful impressions came from prints. The coastal areas around the Chesapeake Bay were visited by several European explorers in the 1500s. No images of the Indians were produced, however, until the English became interested in colonization in the 1580s.

In January 1585, Queen Elizabeth consented to Sir Walter Ralegh's request that the land along the North American coast be named in her honor as "Virginia." The William W. Cole Collection contains many of the engravings of Virginia, produced from 1590 to the 1800s, that influenced European opinions of, and thus policies toward, Virginia Indians. 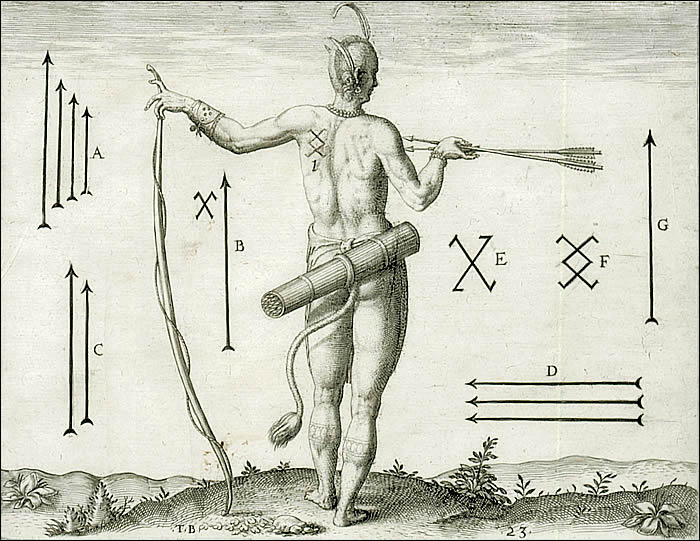 A 1585 expedition to Virginia under Walter Ralegh's sponsorship failed to establish a lasting colony, for the would-be settlers abandoned Roanoke Island (today in North Carolina) and returned to England with Francis Drake in 1586. (A second attempt in 1587 became the "Lost Colony.") The 1585–86 venture did leave a valuable record, however, thanks to a scholar, Thomas Hariot, and an artist, John White. Hariot published A briefe and true report of the new found land of Virginia in 1588.

A group of John White's paintings are preserved at the British Museum. Although his images depict natives from what is now North Carolina, Virginia can claim them too because White and the English knew that area as "Virginia," and the Indians were southern Algonquian and coastal dwellers, as were the indigenous people of Tidewater Virginia.

Though White's work remained virtually unseen until the mid-twentieth century, in the last thirty years the paintings have been widely reproduced. Much about their original creation remains uncertain. White probably made sketches and visual notes in the field and used those studies to paint a finished set of watercolors. From this master set of paintings, White then made further copies for various purposes. Only the set at the British Museum is extant, and whether those paintings are from his master set or from a copied set is unknown.

Note: Early Images of Virginia Indians was on display at the VMHC from April 8 – October 5, 2003. The Cole Collection was given to the Virginia Historical Society in memory of the collector's father, Robert Wallace Cole, Sr., on the occasion of the 100th anniversary of his birth.