Robert E. Lee experienced his best days as commander of the Confederate Army of Northern Virginia during the battle of Chancellorsville in early May 1863. The overwhelming southern victory, however, came at a high price. On the night of May 2, friendly fire struck Lee's indispensable subordinate, Lt. Gen. Thomas J. "Stonewall" Jackson, while he and others rode amid the chaos of the still-forming Confederate lines. Thus began the series of events that led eventually to Lee composing General Orders No. 61, which announced to his army the death of Jackson. 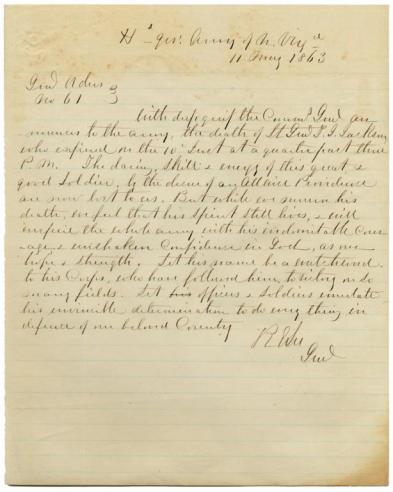 Before daybreak on May 3, 1863, Capt. Richard E. Wilbourn, signal officer on Jackson's staff, arrived at Lee's headquarters to tell him about the general's wounding and report on the progress of the battle. "I reached Gen. Lee about an hour before day and found him laying on the ground [a]sleep," wrote Wilbourn shortly thereafter. "I told him Gen. J. was wounded . . . then he said, 'thank God it is no worse, God be praised that he is yet alive.'" Lee then listened as Wilbourn described the victorious Confederate flank attack. After he finished, the general remarked, "Capt. any victory is dearly bought that deprives us of the services of Jackson even temporarily."

Later on May 3 Lee sent a brief note to Jackson—who was recovering in a field hospital after having his left arm amputated—in which he stated, "Could I have directed events, I should have chosen for the good of the country to be disabled in your stead." The next day an ambulance carried Jackson to Guiney's Station, a safe location south of Fredericksburg. News at first was good. The general appeared to be recovering nicely from the surgery. By the night of Thursday May 7, however, Jackson showed unmistakable signs of pneumonia. Over the next two days, his body weakened dramatically, and he drifted in and out of consciousness. On Sunday, May 10, at 3:15 p.m., Stonewall Jackson died.

General Lee immediately sent word to Secretary of War James A. Seddon. "It becomes my melancholy duty to announce to you the death of General Jackson." The next day he wrote his son Custis a letter in which he succinctly summed up his thoughts on Jackson's death. "It is a terrible loss," he told him, "I do not know how to replace him." All that remained was for Lee to announce the sad news to the army. On May 11, the same day he wrote Custis, Lee composed General Orders No. 61. In it, he praised Jackson's skills as a soldier and stated that his spirit would "inspire the whole army with his indomitable courage." Lee hoped that the soldiers of the Army of Northern Virginia would "emulate [Jackson's] invincible determination to do every thing in defence of our beloved Country."

Among the many treasures in the Mary Custis Lee Papers in the collections of the Virginia Historical Society is Robert E. Lee's copy of General Orders No. 61 written in his hand. That Lee chose to keep this document suggests its importance to him. And it speaks volumes about the historic value of the collection as a whole. Although most of this new collection is open to researchers, those items written by Robert E. Lee, including the order, currently bear reproduction and publication restrictions. The Richard E. Wilbourn letter quoted above is also in the society's manuscripts collection, and a complete transcription of it is available online.