Research into the Best Products Archives: A Journey by Artist Scott Myles

The Forest Showroom as it appeared in Scott Myles’s Spiral Bound, an artist book produced in conjunction with museum exhibitions created by Scott Myles.

In July 2015, artist Scott Myles undertook a pilgrimage of sorts, from his home in Glasgow, Scotland, to the West End Presbyterian Church in Richmond, Virginia. The motivation for this journey was artistic rather than religious—and eventually led Myles to a Andrew W. Mellon Research Fellowship in the Library at the Virginia Museum of History & Culture. Myles’s interest in the church was piqued when he learned that the West End congregation worships in a re-purposed catalogue showroom, one of eight extraordinary structures designed by pioneering architect James Wines as flagships for Best Products in the 1970s and early 1980s. Wines’s buildings stemmed from his work with the New York architecture and design firm SITE (Sculpture in the Environment), which he helped found, and often played with the appearance of ruin, with their façades variously fabricated as fractured, crumbling, or peeling. In the years since they were constructed, these unique buildings have themselves been subject to ruination, first through the closing of the Best Products chain, then through the subsequent dismantling of their decorative façades, and finally—in most cases—their complete demolition. Only the 1980 “Forest Showroom,” in which a line of trees intrudes between the façade and the building itself, as if overrun by time and nature, still stands in anything like its original form. Located on Quioccasin Road in Richmond, and owned by the church since 1999, the building serves not only as a place of worship but also, for the last ten years, as a food bank. Thus Myles’s journey to Virginia revealed to him a place where Best’s consumer goods once were displayed for sale, but now the former showroom is arrayed with tinned foodstuffs and other basic items awaiting free collection by those in need. What the artist found on his Virginian pilgrimage, then, was a commercial retail showroom built as a "ruin-in-reverse," itself made obsolete by commercial collapse, which now serves as a site of belief, support, display, and exchange. 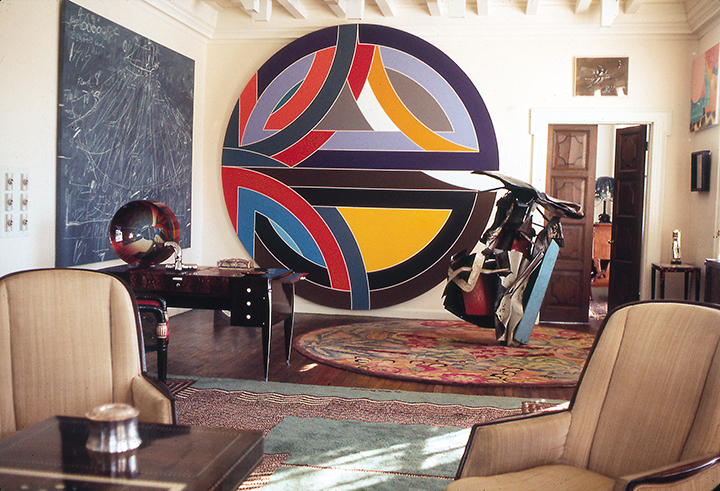 This site and its history of varied uses are remarkable—and were particularly striking to Myles for the extent to which they resonate with the principles of his own practice as an artist. Myles has long been interested in modern and postmodern architecture, in the construction of commercial and social spaces, and above all in processes of giving and free exchange. In previous works he has, for example, reconstructed one of Wines’s Best Products building facades within a Scottish gallery, appropriated commercial signage and furniture from the British retailer Habitat (2012—2013) for his own sculptures, and investigated gift exchange in such projects as Potlatch (2014), where his own print artworks were effectively given away as gift wrapping in a Paris department store.

Artistic journeys are prone to detours and to serendipities that themselves bring new gifts. Myles pursued a fellowship at the VMHC in order to research the collected papers of Sydney and Frances Lewis and the Best Products company records held there. The Lewises were not only successful business owners, but also prolific art collectors; their donations form a major collection of modern art at the Virginia Museum of Fine Arts (VMFA). Myles explains that looking through the correspondence between the Lewises and artists, including Andy Warhol, Allan D’Arcangelo, and Claes Oldenburg, he came across a remarkable letter to James Wines, dated October 15, 1965. In it, Sydney Lewis comments on an art auction he had recently attended, where works by Barnett Newman and Henry Moore fetched astonishing prices, while others fell far below expected valuations. This comment on the unstable financial value of artworks is followed immediately by an offer—in line with Lewis’s preferred modus operandi—that they would arrange to pay Wines for a piece of his artwork by allowing him to choose items from the BEST catalogue in exchange. “You could order as you desired,” Lewis assures Wines, a formulation that echoes the dream that all product catalogs surely intend to inculcate in those browsing through them. 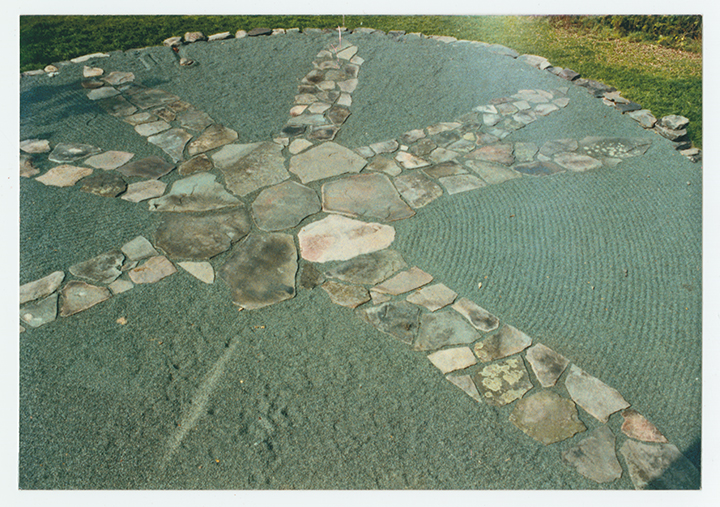 Turning this discovery into a series of new artworks as part of his ongoing project called Spiral Bound, Myles depicted basic goods on the West End Church’s food bank shelves, overlaying each canvas with screen-printed, but partially transparent True-Grain film. The True-Grain overlays bore images of photographs from his trip to Richmond and other sites: we see the artist’s hand holding the keys to Wines’s New York office; we look through a gap in the Forest Showroom’s porous façade; we see a Best Products store sign now decorating the café of the VMFA. The double visions that result from the overlaying of printed film on printed canvas juxtapose disparate yet connected times and places, but also differing systems of value and modes of existence for objects. As the eminent critic Martin Herbert noted in a review of Myles’s 2015 Berlin exhibition of these works, “one takeaway from Spiral Bound and its food-bank endpoint might be that if capitalism continues to unravel and spread ruination, we are bound to spiral back towards older forms of exchange and generosity—ones in which art, while currently conflated with commerce, might still be exemplary.”

Myles has produced an artist book entitled Spiral Bound, a copy of which he donated to the VMHC’s Library, and he aspires to bring the Spiral Bound project full circle in the future. As he explains: “My ambition for this ongoing work is to look more closely at the manner in which the Lewises acted as patrons to artists, and in how they lived among their tremendous collection of artworks and furniture stunningly pictured in a photograph from 1985. On Myles’ recent visit to Richmond he learned that some of the works in the VMFA collection have notations on their verso sides detailing what they were exchanged for. As an artist who often responds to moments of generosity and gift giving within the art historical past, Myles is aware of how generative such gestures can be. As he puts it, “my long-term aim is to develop a new project whereby I’m able to collaborate with the VMHC and the VMFA to present a new display that remixes and re-presents the Lewis collection within the Museum. I’m having discussions with James Wines about a collaboration and believe it’s meaningful to look again at this remarkable moment in American, and specifically Richmond’s history, to look at the many sides as it were.” 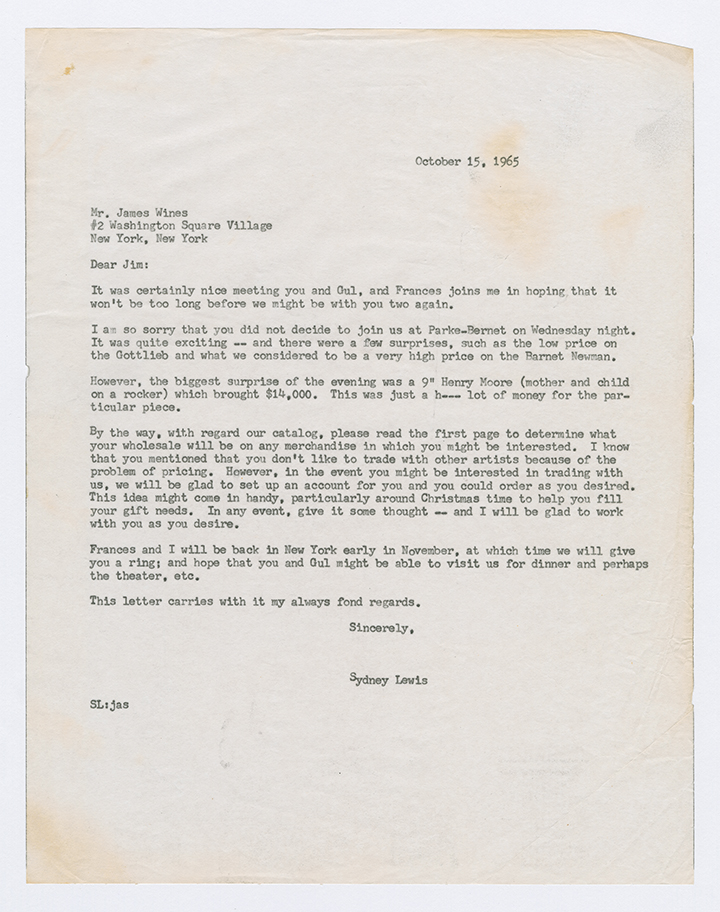 Letter from Sydney Lewis to James Wines dated October 15, 1965, in which Lewis offers to pay for artwork with items form the BEST products catalog. (VMHC Mss1 L5888 b FA2)

A series of letters from 1977 between Sydney Lewis and Allan D’Arcangelo, in the Sydney and Frances Lewis papers at the VMHC, detail an exchange between an artist in financial need and a collector who is supportive and not exploitative. In fact, Lewis declined the chance to buy D’Arcangelo’s early work at a low price and offered financial support instead. Myles says “The Lewis exchange with Allan D’Arcangelo is interesting as later on Allan sends images of a forty-foot diameter sun wheel he was creating on his land in the last years of his life. Allan wrote to Lewis ‘this is where my creative energy is going and my will and my money.’ The ‘Sun Wheel’ is not a work one typically associates with Allan D’Arcangelo, and came after his son, acclaimed artist Christopher D’Arcangelo, committed suicide. For me the VMHC archives and VMFA artworks are not about stasis, storage, or death—they’re informative, and instructive for those who wish to listen. I want to rework them within a new display, suggesting ways creativity might flourish now and in the future—in Richmond and beyond.”

This article appeared in Virginia History & Culture Magazine, Winter/Sping 2020. Scott Myles is a visual artist based in Glasgow, Scotland. He has undertaken two Andrew W. Mellon research Fellowships at the VMHC (2017 & 2019). Dominic Paterson is an art historian and curator at The Hunterian, University of Glasgow.