Who was Oliver Hill? 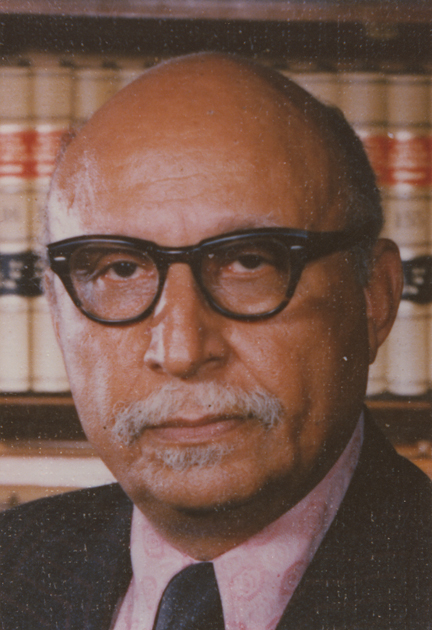 At the Virginia Museum of History and Culture, we place our collections at the very heart of our mission. We believe that you can learn more about the people who inhabited the past by reading the words they wrote and looking at the things they owned. This is the fundamental assumption that guides all our efforts—and the efforts of all collecting institutions.

The VMHC has a group of items that belonged to Oliver W. Hill, Sr., a prominent Richmond civil rights attorney, donated by his son Oliver W. Hill, Jr., professor of psychology at Virginia State University. As lead attorney for the Virginia Conference of the NAACP, Hill, Sr. initiated a number of legal challenges to Jim Crow, including Davis v. School Board of Prince Edward County, one of the five cases that became part of the 1954 Supreme Court decision, Brown v. Board of Education of Topeka. 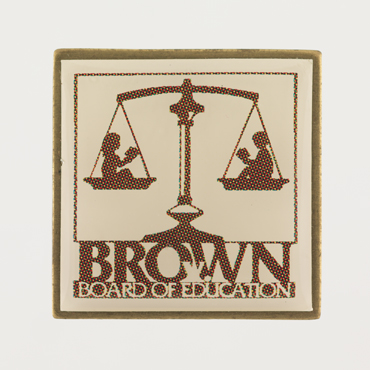 What do these items tell us? Three of them—a square white button, a financial statement for services in the Prince Edward County case, and a Harvard Law School medal—relate to Hill’s role in the Brown decision. The most significant of these is the Harvard Law School Medal of Freedom, an award established “to honor individuals who have worked to uphold the legal system’s fundamental commitment to freedom, justice, and equality.” It has been awarded only a few times—in this instance to the attorneys for the litigants in the Brown case. The medal is engraved, appropriately, with the image of Charles Hamilton Houston, the first African American admitted to the Harvard Law Review and the dean of the Howard University School of Law, where Hill earned his degree in 1933. Under Houston’s leadership, Howard’s law school became a training ground for a generation of attorneys dedicated to pursuing racial justice and equality under the law. His students often recalled Houston’s admonition that “a lawyer’s either a social engineer or he’s a parasite on society.” 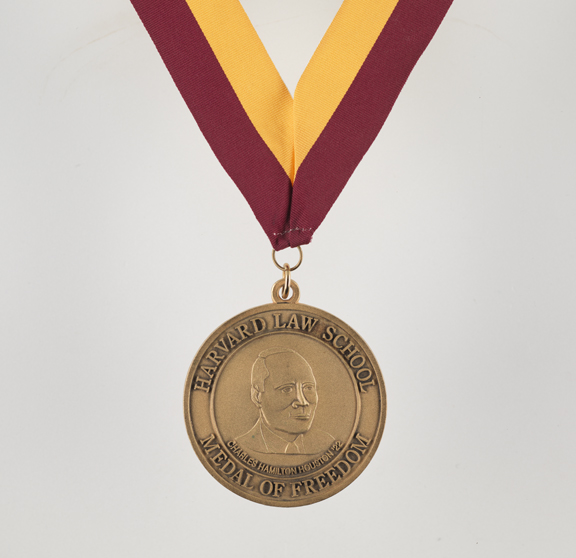 After graduating from Howard, Oliver Hill practiced law briefly in Roanoke before returning to Washington. In 1939, he moved back to Richmond, where he immediately became involved in a legal challenge concerning inequalities in pay between black and white teachers in Norfolk Public Schools.

In Alston v. School Board of the City of Norfolk, the U.S. Court of Appeals found the school system’s pay scale to be discriminatory, leading to the equalization of teacher’s salaries in the city and in school systems around the Commonwealth of Virginia. This was an important step in undermining “separate but equal” education. 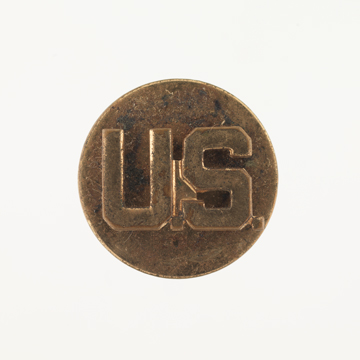 Two other items—a U.S. Army collar pin and a pay voucher from February 1944—remind us of Hill’s service in the armed forces during World War II. Like other lawyers, he applied for a commission in the U.S. Navy, a request that he believed only “hasten[ed] my being inducted into the military.” Hill was drafted into the army in 1943 and served in an engineering unit in Europe. At the time, he was thirty-six years old and married, circumstances that convinced him that the local draft board targeted him because of his civil rights work. Ultimately, however, World War II served to accelerate efforts to end legal segregation in the United States. The contributions of African Americans during the war and the discrediting of the racist ideologies of America’s enemies helped fuel the modern civil rights movement. 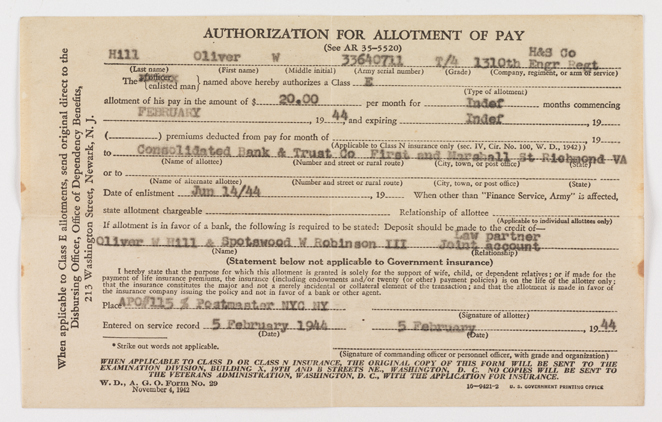 In April 1951, black students staged a walk-out of Farmville’s Robert Russa Moton High School to protest poor conditions there. The leader of the strike was a sixteen-year-old junior, Barbara Johns. Johns contacted the Virginia NAACP, and Hill and his law partner, Spottswood Robinson, traveled to Farmville to meet with the students and their families. The lawyers agreed to take the case, but only after the plaintiffs agreed to press for the desegregation of Prince Edward schools and not just a separate, equal facility. Davis was combined with four other cases and moved through the courts as Brown v. Board of Education. In 1954, the U.S. Supreme Court issued its decision, declaring that “separate educational facilities are inherently unequal.” 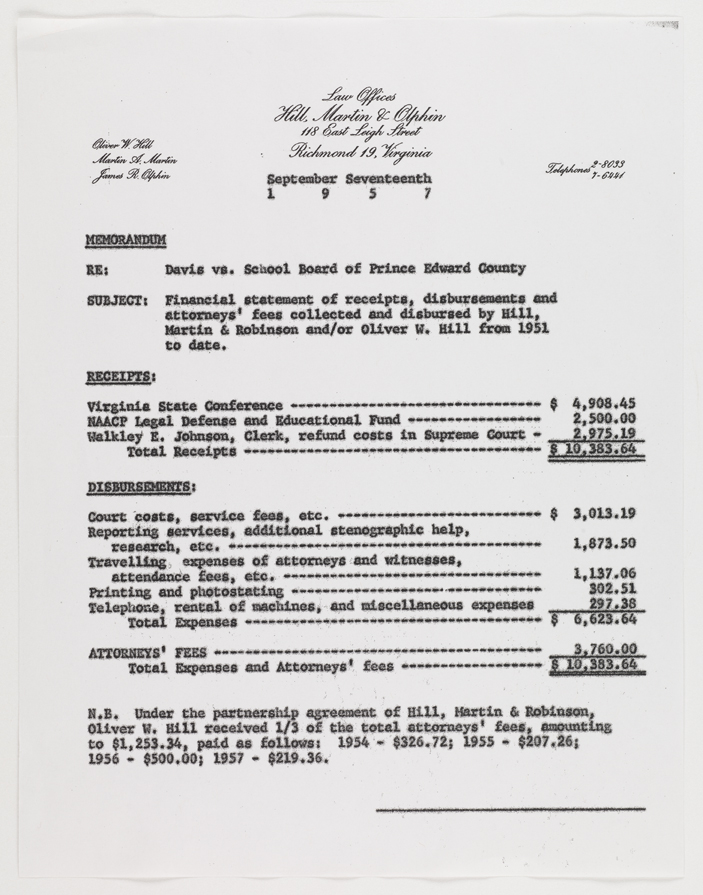 A copy of a memo outlining fees for services in Davis v. School Board of Prince Edward County (VMHC 2014.79.17)

The financial statement, dated September 17, 1957, is written on the letterhead of Hill, Martin, and Olphin. Under the terms of a previous partnership agreement, Oliver Hill was to receive $1,253.34 in attorney’s fees for his services in the Davis case from 1954 to 1957. In contrast, the state spent millions of dollars hiring outside law firms to defend Jim Crow.

Two other items are lapel pins—a cardinal and the Virginia state seal—reminding us that Oliver Hill was a Virginian. With the exception of the few years he lived on the other side of the Potomac River and his time in the service, Hill spent his entire life in the commonwealth. His father was the founder of Mount Carmel Baptist Church in Richmond. His mother and stepfather worked at the Homestead Resort in Bath County. And family members trace his ancestors to Chesterfield County before the American Revolution. These lapel pins are shown in the slideshow below.

Oliver W. Hill, Sr., died at his home in Richmond on August 7, 2007. He was 100 years old and had lived long enough to be recognized for his many contributions to civil rights. In 1999, Bill Clinton awarded him the Presidential Medal of Freedom. In 2003, the General Assembly named him Virginian of the Year, and in 2005 he received the Spingarn Medal, the NAACP’s highest honor.

Learn more about the Civil Rights Movement in Virginia and Brown v. Board of Education.

This article was written by Bill Obrochta while serving as the Manager of Educational Services at the Virginia Museum of History and Culture.