"From the political point of view, the murder of John Brown . . . would impart to the Union a creeping fissure that at the last would rend it." -Victor Hugo

Observers on the eve of the Civil War were as conflicted over the fate of John Brown as later generations would be. The opinion of the towering French poet, novelist, and dramatist Victor Hugo was judged by many to be the verdict of the civilized world. He strongly opposed the punishment. Many in Europe followed Hugo's lead in their disappointment that America chose to execute a man for only trying to free enslaved people.

Most white southerners, angry at so bold a challenge to their sovereignty and honor, immediately denounced Brown as a lunatic and criminal. Northern reaction to the raid varied among whites. Many initially rejected his use of violence and were disinterested in his goal. Ralph Waldo Emerson, Henry David Thoreau, and other important New England thinkers, however, took a firm stand in his support from the start. After the hanging, Brown was eulogized by many as a martyr whose death opened the way to emancipation in America.

Black Americans, North and South, praised John Brown. Though some denounced his use of violence, at the same time they endorsed his goal of abolishing slavery. Immediately following the execution, meeting halls and churches in the North were filled with sympathizers—white and black—who proclaimed Brown a martyr. These supporters, however, paled in number compared to Brown's northern detractors. Many in the North were content to tolerate slavery, believing it a problem for white southerners alone to resolve. Abolitionist leaders—many of whom had long rejected violence—at least initially denounced Brown's invasion as so great an affront to slaveholders that it would only impede their mission. Leaders of the new Republican Party, which had been founded in 1854 largely to halt the expansion of slavery into the territories, did not advocate abolishing slavery where it already existed and they attempted to distance themselves from Brown. To counter the pro-Brown demonstrations, proslavery businessmen in the North, whose prosperity was linked to trade with the slave-supported economy of the South, rejected Brown outright. They organized massive "Union meetings" in Philadelphia, Boston, and New York City that attracted thousands who denounced both the man and the raid. Southerners, unfortunately, paid more attention to the abolitionist minority. 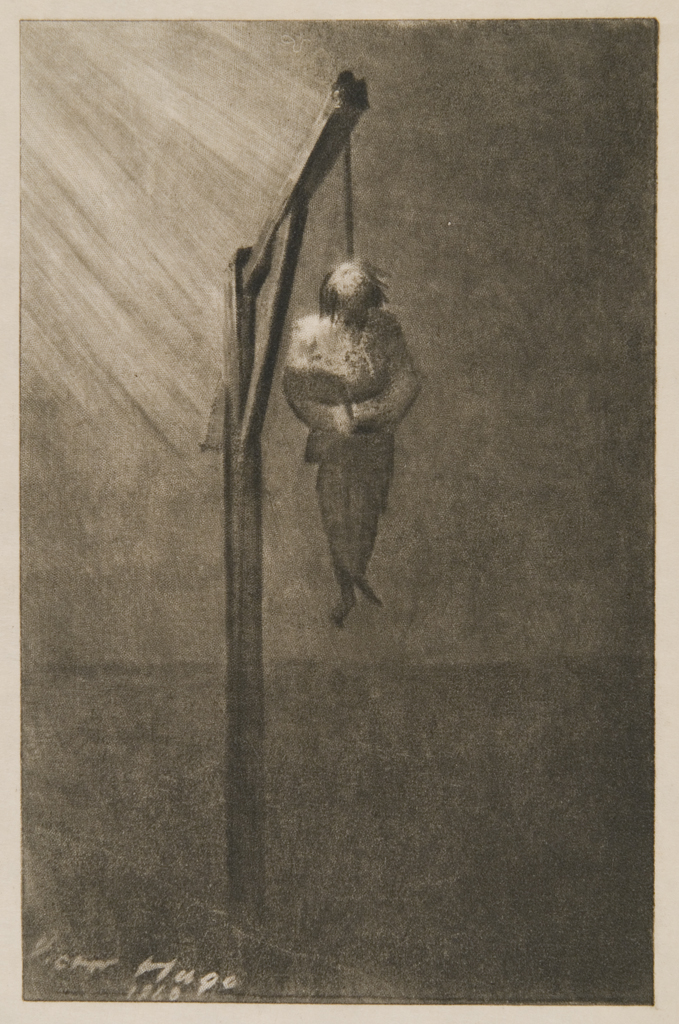 The Hanging of John Brown, 1860 Drawing, by Victor Hugo
Observers were conflicted in their judgment of a man who had invaded an American town. Most white southerners denounced John Brown as a lunatic and criminal. In the same way, many in the North rejected his violence, but other whites there eulogized a martyr whose death opened the way to emancipation. From the start, African-Americans, North and South, praised John Brown. Europeans were disappointed that America chose to execute a man whose only objective was to free slaves. (VMHC E451 H89)
Image 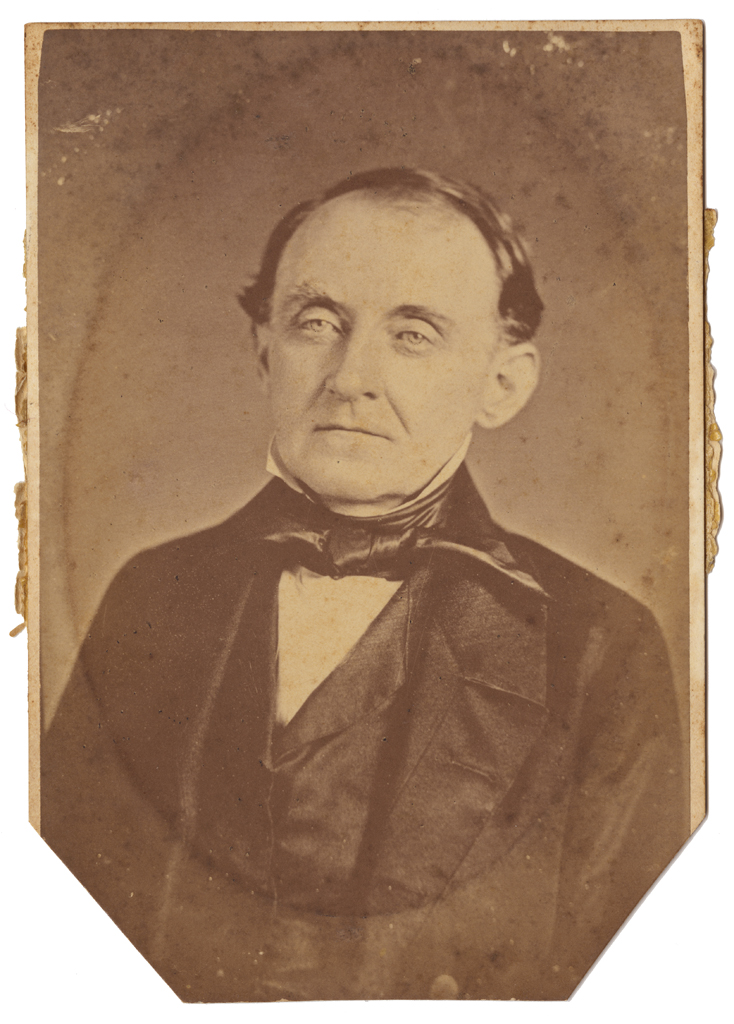 William Green
The hope of many Americans was that moderate voices North and South would be heard. One such spokesmen was the attorney William Green of Richmond. With his friend John Andrew of Boston he calmly debated the issues and remained consistently respectful of the other's point of view. Green, the Richmonder, could never justify the institution of slavery, while Andrew, the Bostonian, could never effectively defend Brown's criminal actions. (VMHC 2009.1.8)
Image 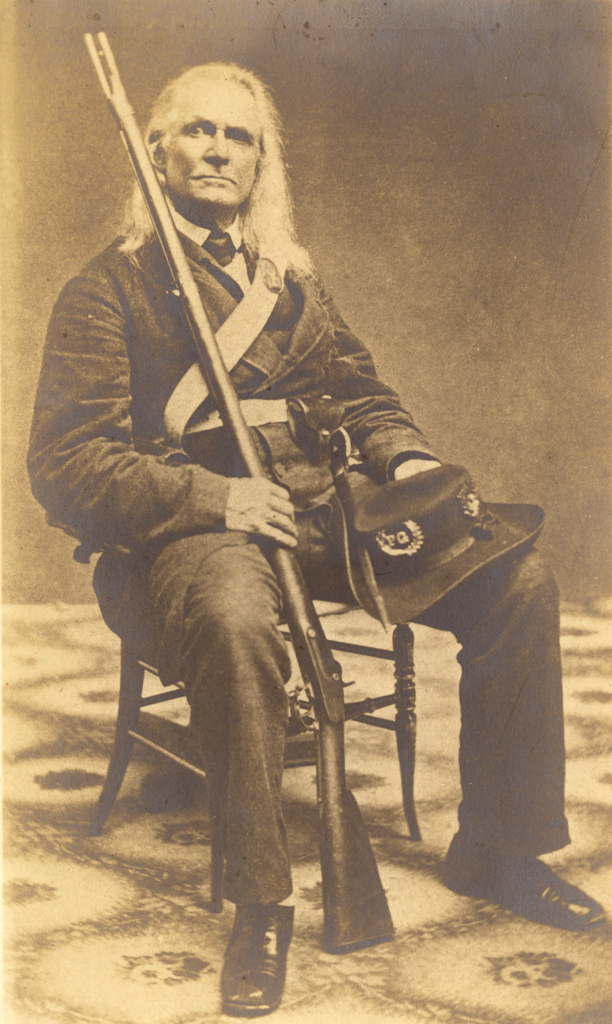 Edmund Ruffin
Edmund Ruffin was a radical Virginian who advocated secession. He welcomed the raid and northern support of it as an opportunity to advance southern unity. Ruffin managed to sneak into a militia unit at Harpers Ferry to witness the hanging. He sent one of Brown's pikes to each of the southern governors, urging its prominent display in their respective state capitol buildings as "evidence of the fanatical hatred borne by the dominant northern party to the institutions & people of the Southern States." Ruffin also encouraged the linking of Brown to the Republican Party, which he hoped would win the presidency in 1860 and thereby inevitably dissolve the Union. (VMHC 2007.5.48)
Image 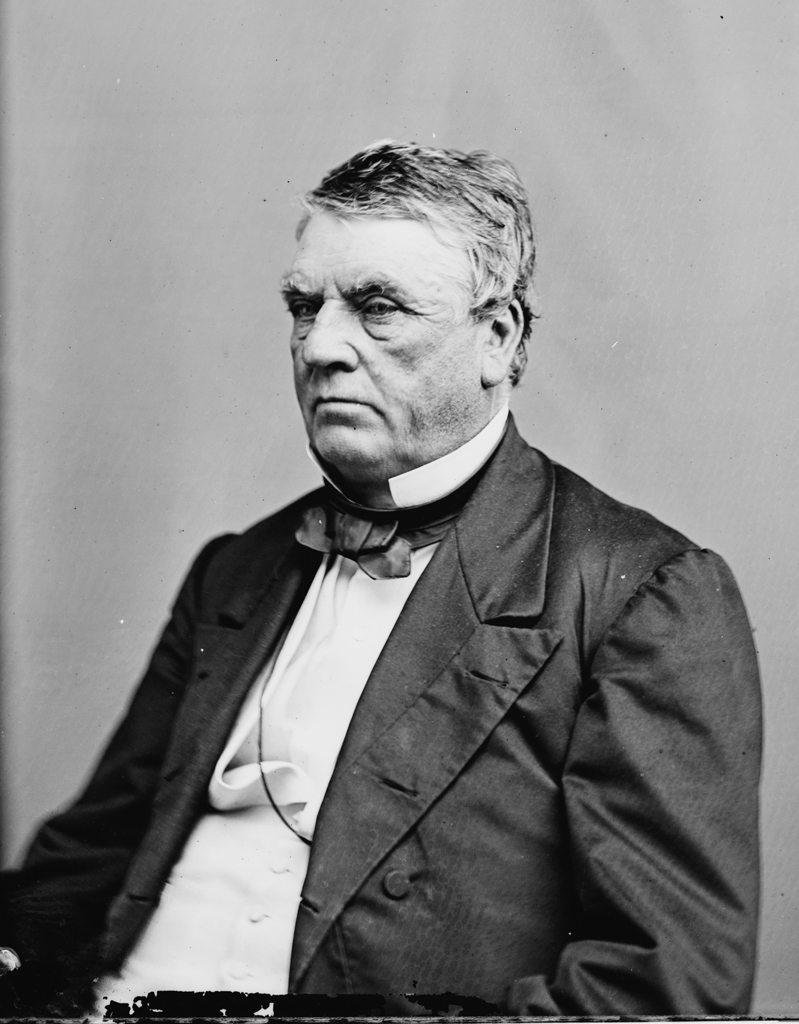 John Minor Botts
Botts was a former U.S. congressman from Virginia who attempted to calm the tensions. He wrote: "[Brown and his men] deserved the punishment they have met with . . . but that any respectable portion of my fellow-countrymen had any knowledge of, or had participated, directly or indirectly, in this hell-born scheme of violence, I have not, I cannot, and I will not believe . . . And yet the effort has been made, and my blood runs cold, and I shudder when I say, successfully made, to a great extent, to create the belief that a great and powerful party [the Republicans] . . . knew and approved of, and participated indirectly in the crimes and outrages perpetrated, and that they sympathized with the convicted felons . . . Great God! What an idea to take possession of the minds of men." Does anyone fear that a second invasion "on a larger scale" might follow such a "miserable failure," Botts asked, with no need to answer his own question. (Image courtesy of the Library of Congress) 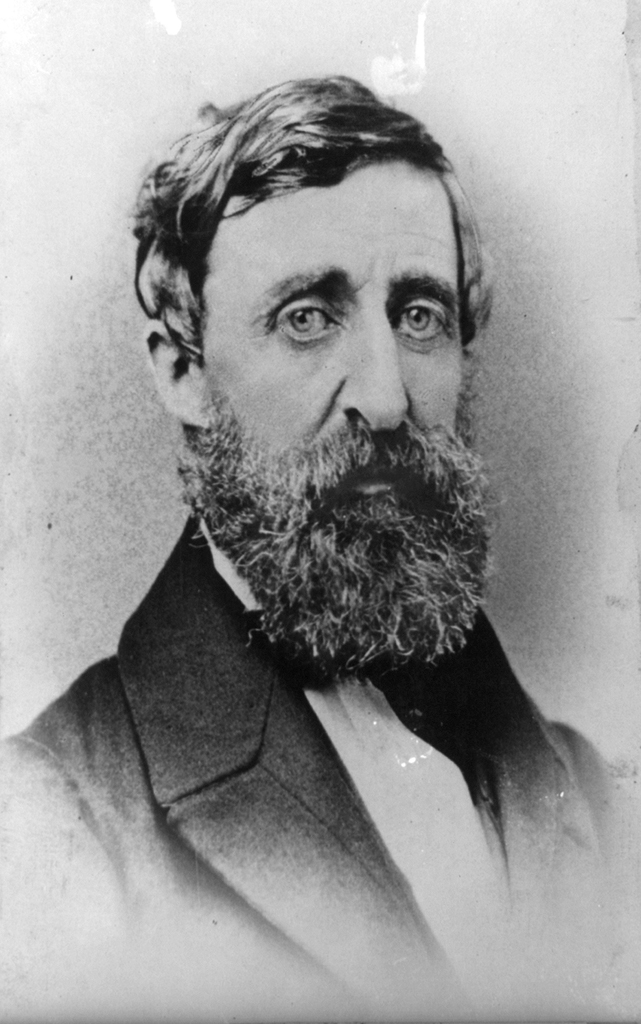 Henry David Thoreau
Henry David Thoreau delivered his "Plea for Captain John Brown" only two weeks after the raid. He agreed with Brown's "peculiar doctrine that a man has a perfect right to interfere by force with the slaveholder, in order to rescue the slave." He called the raid "the best news that America has ever heard. It has already quickened the feeble pulse of the North, and infused more and more generous blood into her veins and heart than any number of years of what is called commercial and political prosperity could." Brown was "like the best of those who stood at our bridge once, on Lexington Common, and on Bunker Hill, only he was firmer and higher principled." (Image courtesy of the Library of Congress)
Image 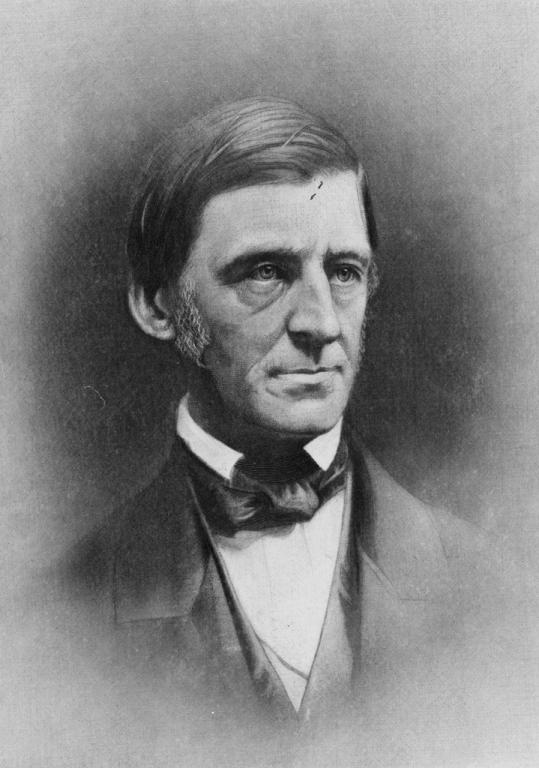 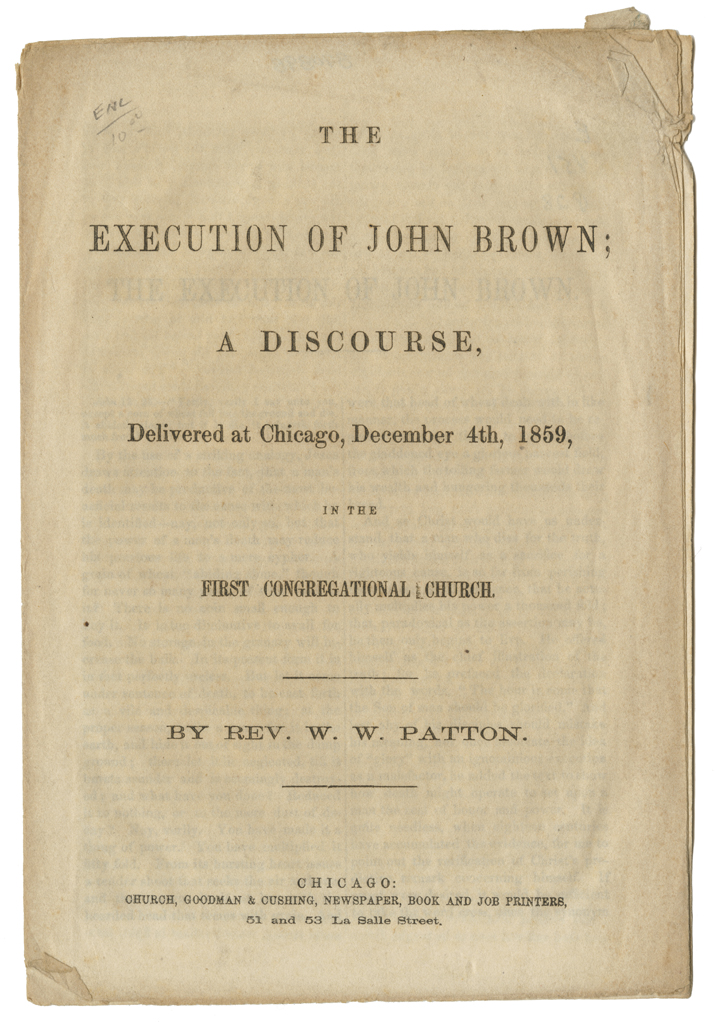 The Execution of John Brown: A Discourse Delivered at Chicago, December 4th, 1859, by Rev. William W. Patton
One of the many speakers in the North who eulogized John Brown immediately after the hanging was the prominent theologian W. W. Patton. He took a moderate position. Patton would not condone a slave revolt because it "would not benefit the slave" who would be "slaughtered by thousands," and it would be "a hell on earth to the whites." However, no man had ever expressed "nobler sentiments' than Brown who was "a genuine Christian." Therefore, Patton concluded, Brown was "[not] severely responsible" for what he did. (VMHC E451 P28)
Image 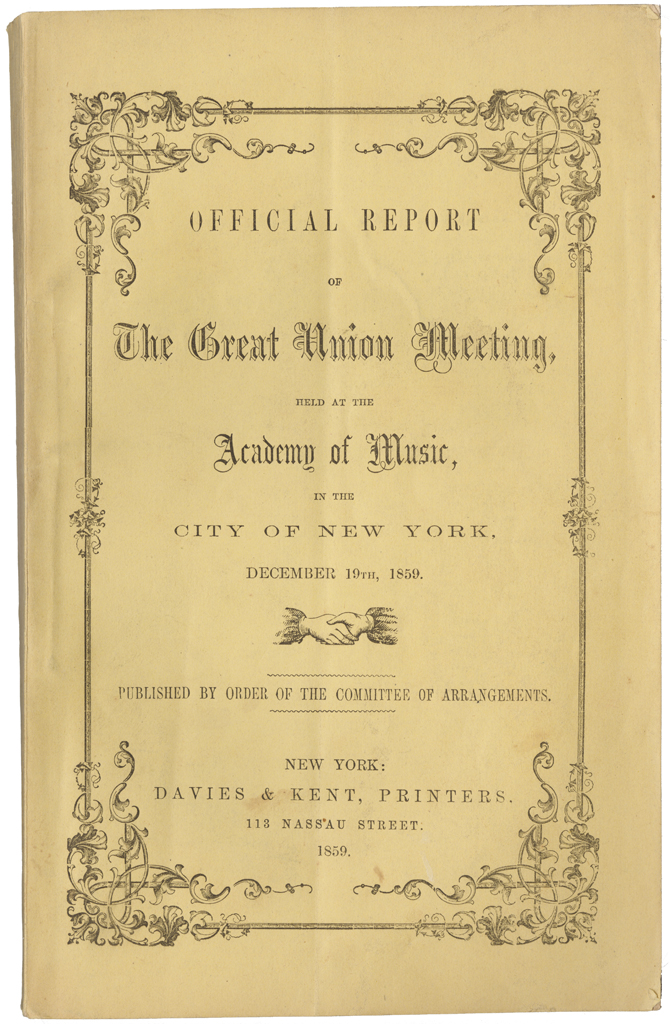 Official Report of the Great Union Meeting, Held at the Academy of Music, in the City of New York, 1859
The Great Union Meeting in New York City was the largest ever held there: 6,000 filled the Academy of Music, 15,000 more gathered outside, and a document of support was signed by 20,000 citizens—one third of the registered voters. The meeting was a blatant celebration of the commercial ties between the city's cotton merchants and the slave-based economy of the South. Resolutions were passed. "[W]e regard the recent outrage at Harper's Ferry as a crime . . . and we approve of the firmness by which the treason has been duly punished"; "[T]he Constitution . . . recognize[s] the institution of slavery" and "it is our duty . . . to stand by that Constitution." (VMHC E451 N53 1859)
Image 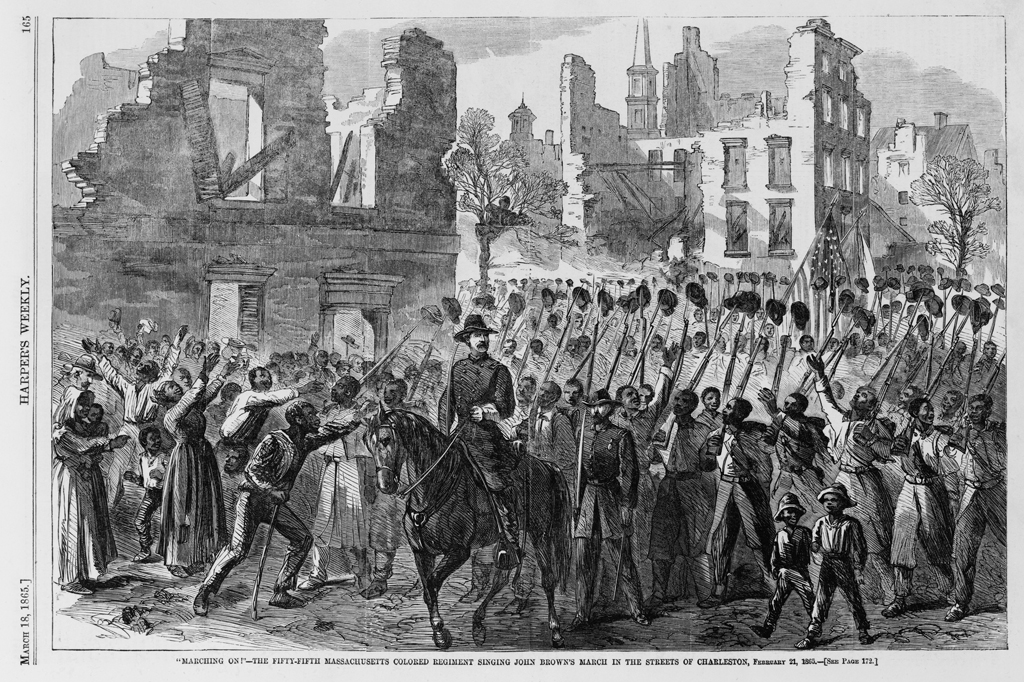 Fifty-fifth Massachusetts Colored Regiment Singing John Brown's March in the Streets of Charleston, 1865
Of all of the remembrances that followed Brown's death, the farthest reaching was the Civil War marching song "John Brown's Body," which proved to be the most popular lyric sung by soldiers of the Union army. Its clear differentiation between the impermanence of the body (John Brown's body lies a-mold'ring in the grave) and the eternal life of the soul (His soul goes marching on) must have been reassuring to young men marching toward what could be the scene of their final earthly endeavors. Its lyrics were written just before the war by members of the 12th Massachusetts Regiment, one of whom, a Scotsman named John Brown, provided the inspiration. The stirring refrain, "Glory, glory hallelujah!," was retained when the song was reinvented as "The Battle Hymn of the Republic," written by Julia Ward Howe, the wife of "Secret Six" member Samuel Gridley Howe. This engraving of the 55th Massachusetts marching in Charleston, S.C., singing "John Brown's March," was published in Harper's Weekly on March 18, 1865. (Image courtesy of the Library of Congress)