John Brown remains one of the most controversial figures in our history. To destroy the institution of slavery, he firmly believed there was only one possible course of action. He saw what he thought was the ultimate wrong and tried in the only way he could imagine to right it.

In late 1855, Brown saw an opportunity in Kansas to launch a strike against slavery. The territory had become a skirmish ground where proslavery and free-state settlers battled to determine whether the region would become a slave state or a free state. Brown went to Kansas with the idea that the violence there could be escalated into so great a national disturbance that slavery would have to be abolished. There on May 24, 1856, he and several of his family members murdered five proslavery settlers at Pottawatomie Creek. 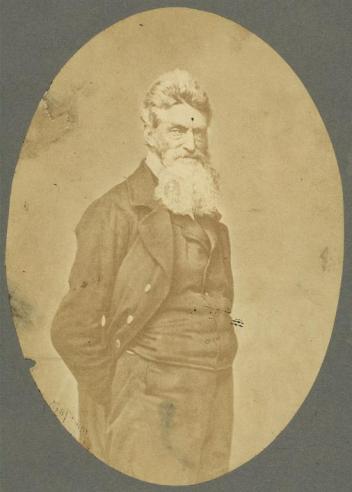 Three years later, in October 1859, Brown and twenty-one followers seized the United States arsenal at Harpers Ferry, Virginia (now West Virginia). Their intent was to take rifles stored there and start a massive slave insurrection that would spread throughout the South and eventually free all the nation's four million slaves. Once the raid began, however, no army of runaway slaves and sympathetic whites emerged to join his movement, and on October 18, Brown and his followers were captured by a detachment of U.S. Marines.

From the start, Brown's efforts to bring an end to slavery were lauded by the poets Henry David Thoreau and Ralph Waldo Emerson, who proved to be the most important of his supporters because of their prominence. Brown, who had plotted the raid for decades, was driven by religious fervor: he believed himself chosen by God for the mission. Contemporaries used the term "monomaniac" to identify such a person. To them, Brown was comparable to the fictional Captain Ahab in Herman Melville's novel Moby Dick.

Throughout the twentieth century, apologists for John Brown have turned out imagery and biographies while his detractors have not been active. It has mattered little. Americans remain as divided over Brown now as ever. To this day mention of the name John Brown brings powerful feelings to the surface. His violent attack against slavery continues to inspire debate about issues of liberation, justice, vigilantism, and terrorism. Do individuals ever have the right to carry out violent acts based on conscience? If he believed he would ultimately fail but launched the attack anyway to make himself into a martyr, is Brown so different from the bombers of today—from Oklahoma City to Iraq—who attempt to galvanize public opinion and in that way bring about political and social change? Do fanatical individuals ever have the right to put the lives of others at risk?

Which John Brown should we remember? The crusader for abolition or the bloodthirsty terrorist? Is it possible to list him among the great pantheon of American heroes, or do we still recoil from the image of his attack on an American military installation, an action that can be described by no term other than treason?

Note: The Portent: John Brown's Raid in American Memory exhibition was on display at the VMHC from October 10, 2009 – April 11, 2010. The exhibition was funded by generous contributions from the E. Rhodes and Leona B. Carpenter Foundation and the Virginia Foundation for the Humanities.