The first English settlers were welcomed by Virginia’s Indigenous people with ceremony. However, following Capt. John Smith’s return to England in 1609, both George Percy and Gov. Baron De La Warr proved incompetent in negotiating with potentially friendly tribes. Deteriorating relations brought conflict that ended only when John Rolfe married Pocahontas in 1614. As the English appropriated additional land, another crisis loomed.

The Struggles of Jamestown

The site was defensible, navigable, and unsettled by Indigenous people, but it was plagued by mosquitoes and brackish water. The settlers arrived too late to plant crops. Two-thirds of them died before relief arrived in 1608. When an expedition sent in 1609 was shipwrecked by bad weather for a year in Bermuda, the settlers nearly starved; only sixty of the earlier 214 survived. Some turned to cannibalism as relations with once-helpful Indians deteriorated.

While exploring west of Jamestown, Capt. John Smith was captured by the Powhatan Indians and taken to chief Powhatan. Smith claimed that “as many as could layed hands on him” and that they were “ready with their clubs, to beate out his braines,” when “Pocahontas the Kings dearest daughter saved him from death.” Many today consider Smith’s account false. However, the two thereafter established a friendship.

Before arriving in Virginia, Capt. John Smith had fought in the Hungarian wars against the Turks, where he beheaded three Turkish champions. Later captured and sold into slavery in Russia, Smith escaped by killing his master. In Virginia, Smith showed the same brashness and bravery, thereby winning the respect of the Powhatan Indians. He maintained friendly relations with them until he left Jamestown in 1609.

In 1613, the English captured seventeen-year-old Pocahontas, a daughter of Chief Powhatan, and confined her at Jamestown. While there she converted to Christianity and married colonist John Rolfe. Their union brought an end to the First Anglo-Powhatan War and inaugurated a peace that was maintained for nearly a decade. The struggling settlement at Jamestown––on the verge of extinction––survived.

“Pocahontas” was a nickname for “Matoaka.” (“Pocahontas” means “little plaything.”) When “Matoaka” converted to Christianity, she took the biblical name “Rebecca.” Who was the real Pocahontas––Matoaka or Rebecca? What were her motives? No written record survives that tells her story from her point of view.

By 1622 it was apparent to the native people that the English colonists intended to expand their settlements in Virginia and continue their effort to destroy their culture. On March 22, a well-coordinated attack against the English plantations along the James River was launched by small bands of Opechancanough’s men. About 350 people were killed, a quarter of the English population. These losses were sustained on about half of the outlying plantations. The colonists in Jamestown retaliated and used the attack as an excuse to destroy villages and kill Virginia Indians wherever they found them.

The Survival of Jamestown

Despite poor planning, near famine, and a great loss of life in its first years, Jamestown survived when other colonization efforts had failed. With the help of native Americans with whom they traded for food, Jamestown became the first permanent English settlement in America. 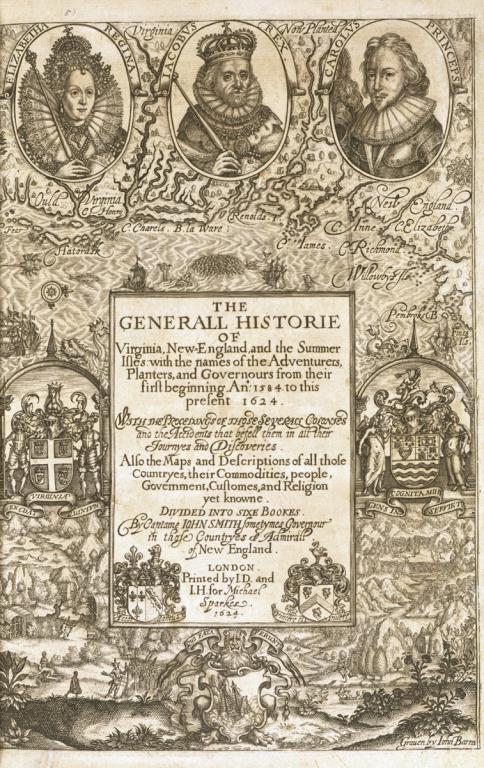 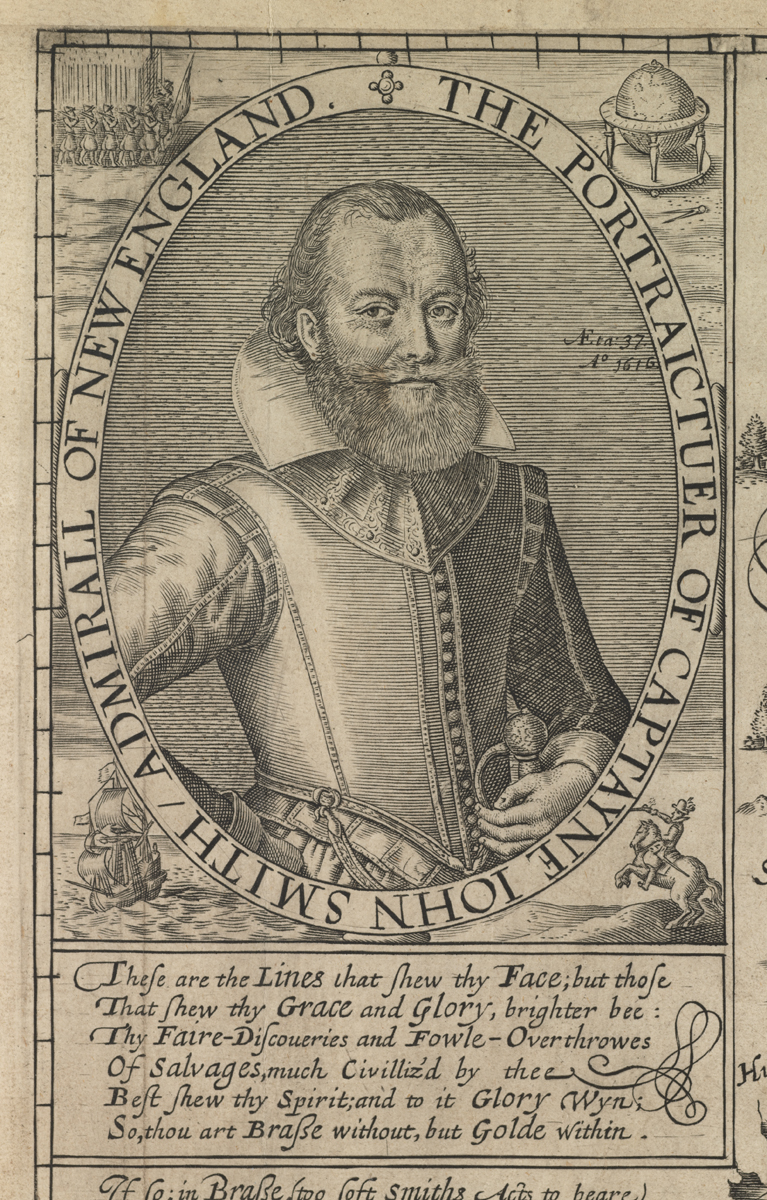 An engraving of John Smith from his book, "The Generall Historie of Virginia, New England, and the Summer Isles," in which he recorded the early history of Jamestown. (VMHC Rare Books o.s. F229.S7 G3 1624)
Image 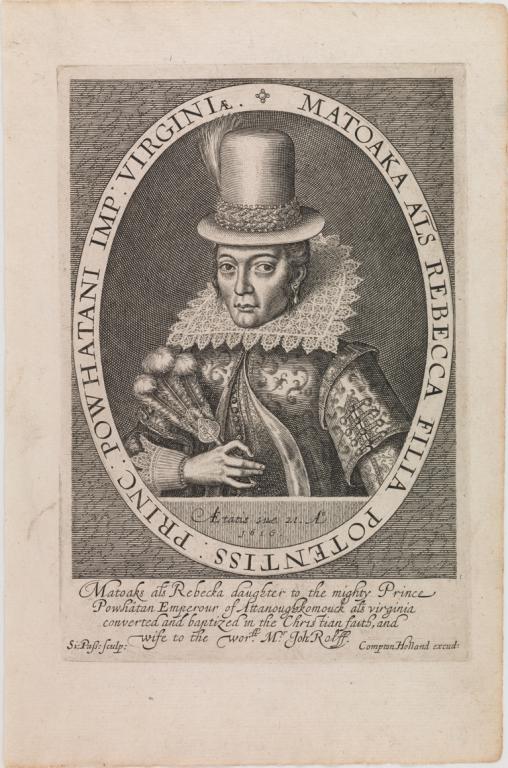 Simon van de Passe’s engraving of Pocahontas, 1616. Her only portrait taken from life and thereby the most credible image of her, 21-year-old Pocahontas is depicted in rigid Jacobean attire. This costume probably hid tattooing and certainly provided the chaste image wanted by the Virginia Company, the organization that sponsored the Virginia settlement and Pocahontas's trip to England and likely commissioned this print for publicity. (VMHC 1993.192)
Image 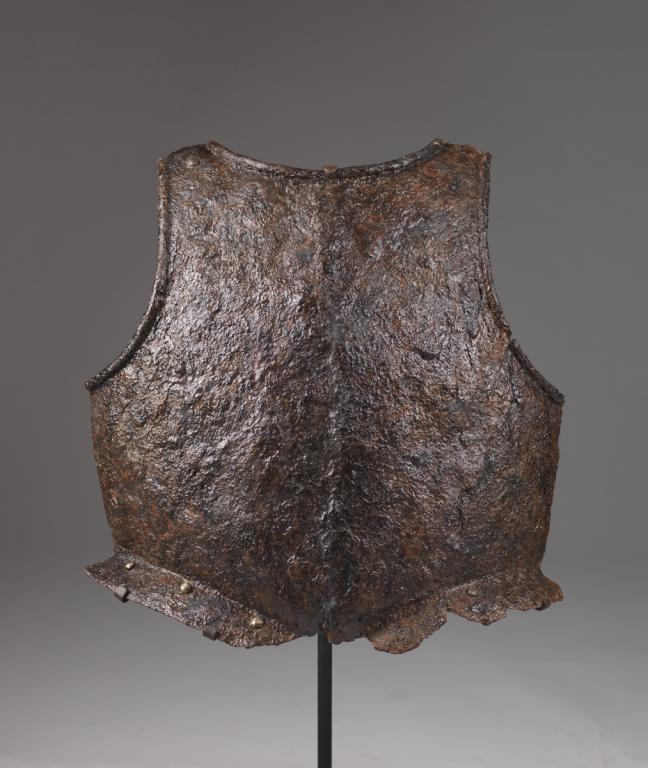 Iron breastplate from the armory of the Tower of London, excavated at Jordan’s Journey, Prince George County. Following the massive 1622 attack on the English settlers by Native Americans, King James I provided weaponry from the Tower of London to help the settlers retake lost ground. The Virginia Company chose not to withdraw but urged “revenge” and “extermination” of the native people.
Image 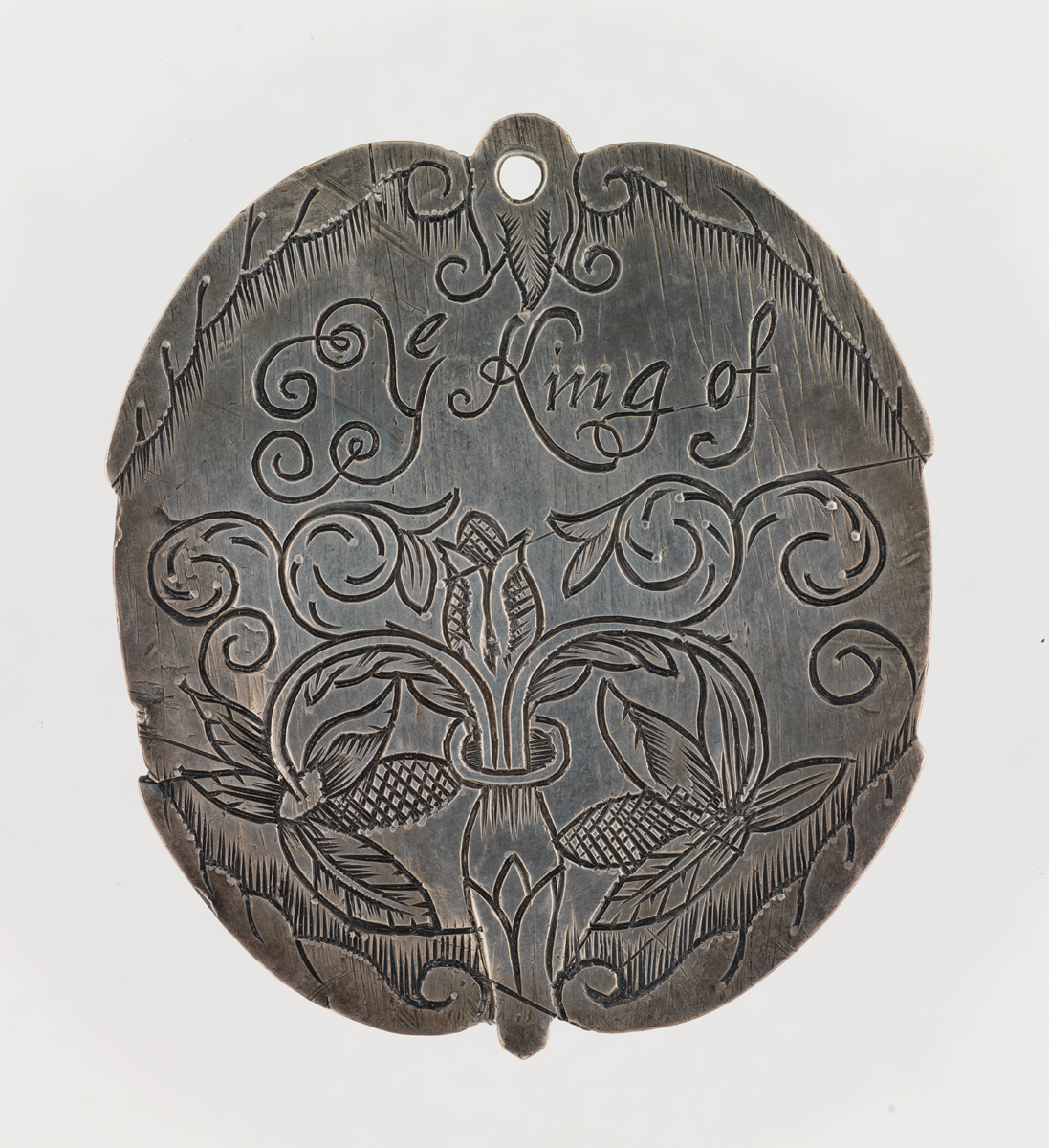 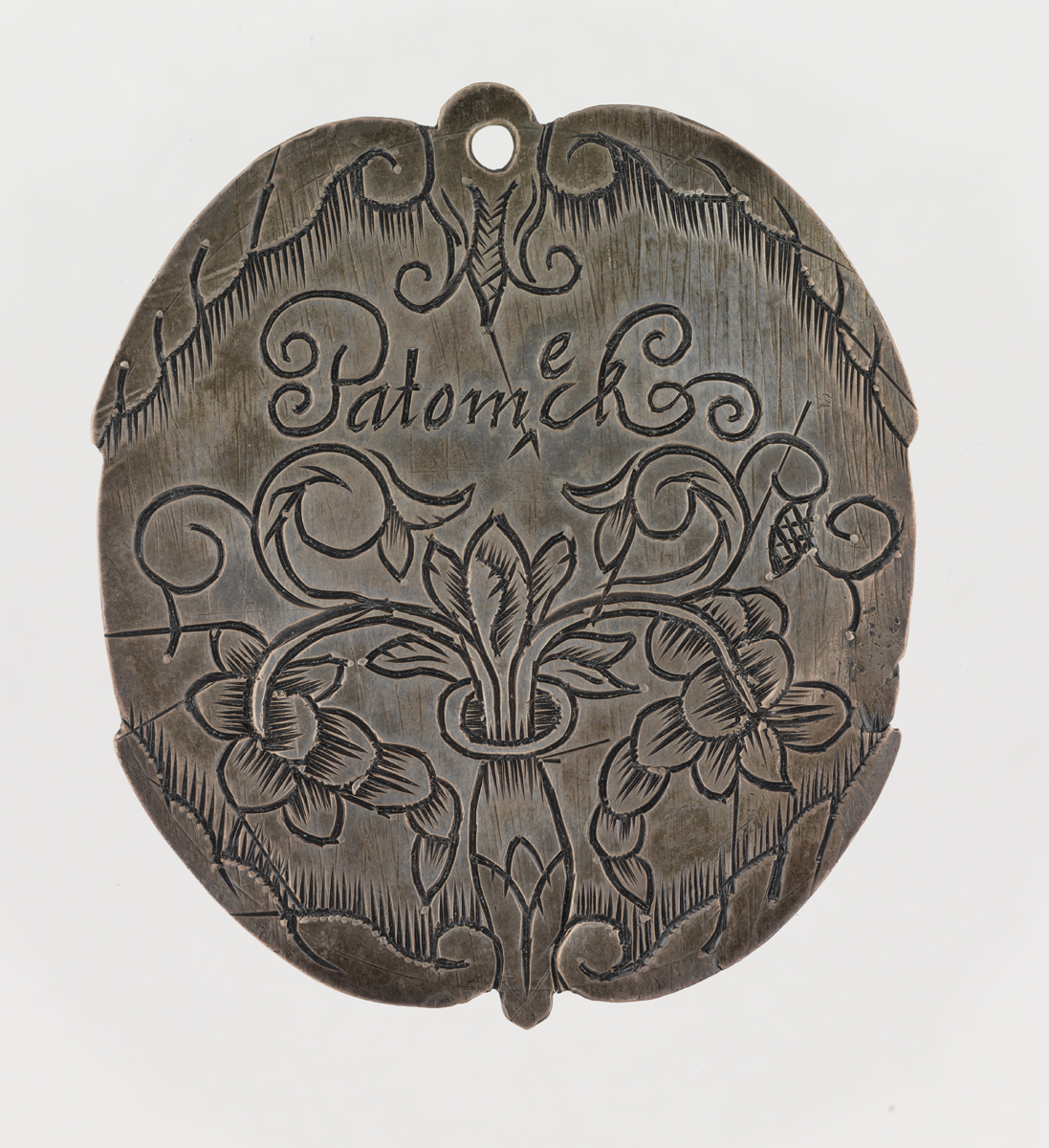 Indian badge (Back), about 1662. After decades of conflict with Native Americans, the English settlers issued passport badges to control Indian entry into English territory. This medal is engraved “Ye King of Patomeck” (Potomac). (VMHC 1834.1) 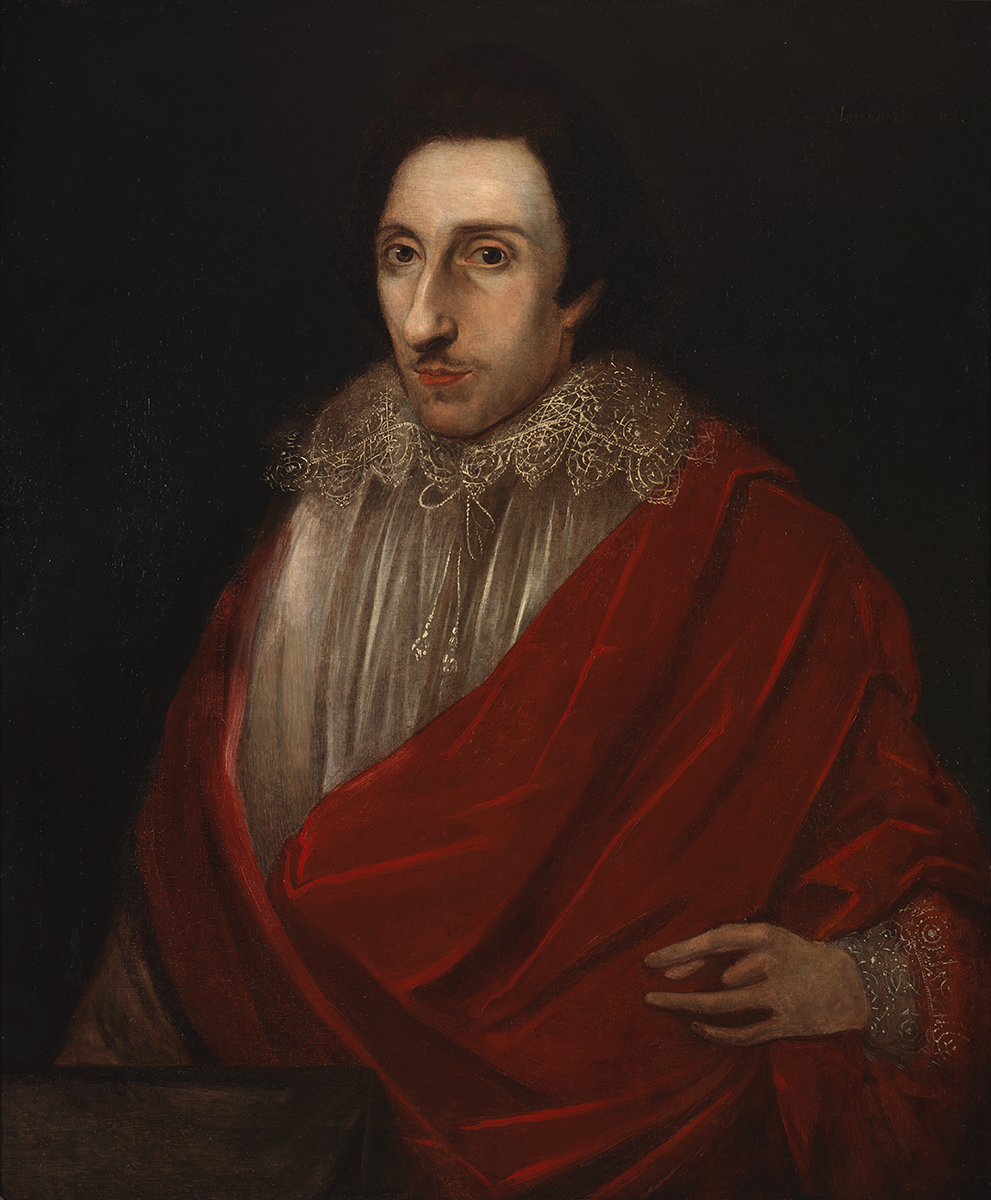 Portrait of George Percy. In 1610, with 70 men, George Percy massacred the Paspahegh and Chickahominy. His men also “put [a captured] Queen to the sworde” and “put her children to death by throwing them overboard and shooting out their braines in the water.” (VMHC 1854.2)