Over more than 16,000 years, Virginia Indians transitioned from nomadic bands of hunter gatherers to sedentary farmers.

Indian societies evolved from small bands to larger tribal identities and later chiefdoms. This change resulted from innovations in technology, increasing population, and a warming climate. Spears gave way to atlatls, allowing hunters to kill at a distance. Later, agriculture created a number of stratified societies, with priests conducting religious ceremonies for many occasions, including the planting and harvesting of crops.

From Where and How?

Discoveries at Cactus Hill (Sussex County) in the 1990s undermined a theory that humans first arrived in the Americas 13,000 years ago, traveling from Siberia via a temporary land bridge across the Bering Strait. Stratified sequences date Cactus Hill 5,000 years earlier, before falling sea levels exposed the bridge. Scholars now propose that people may have skirted along pack ice on either the Pacific or Atlantic coast, or both.

Although native cultures changed over thousands of years, the motivation and resources of Virginia Indians remained the same. Their reliance on stone for tool construction was consistent through multiple periods of time even as their methods for shaping stone evolved. Improvements in technology facilitated the acquisition of food, whether from hunting or agriculture.

Even with the end of the Ice Age, the environment continued to change. Temperatures climbed, sea levels rose, precipitation increased, and by 8000 BCE hardwood forests provided a greater variety of nuts, berries, and fruits for foraging. Large mammals were by now extinct, but Early Archaic people gathered together in resource-rich areas where they could fish and hunt.

Archaic Age families, though mobile, tended to stay within smaller, fertile woodland areas. The stone axe—a new tool—made the cutting of wood for fires and shelter easier. With the axe and fire, forests were altered into environments that attracted animals that fed on the new growth. These animals were hunted by humans using the superior technology of the atlatl.

Beginning around 1200 BCE, people in Virginia became more sedentary as they developed an agricultural tradition and an understanding of how to make and utilize pottery. Growing corn required people to settle near the fields they cultivated. Clay pots, which proved superior for cooking, could also be used as dry containers to store food for a growing population.

Before the middle of the Woodland Period there was little difference between the tribes scattered across Virginia. However, as agriculture began to provide most of their food, people developed stronger local identities centered on village life. By the Late Woodland Period, the town of Werowocomoco had developed as an important site that would eventually become the epicenter of the Powhatan Chiefdom.

The rise of agriculture and village life brought stability to communities, allowing them to become socially and politically complex. Procuring food took less time; people were able to specialize in other skills. Some communities became associated with the production of pottery or with making shell beads; such output became part of a tribe’s cultural identity. Surpluses of material goods facilitated new trading networks. 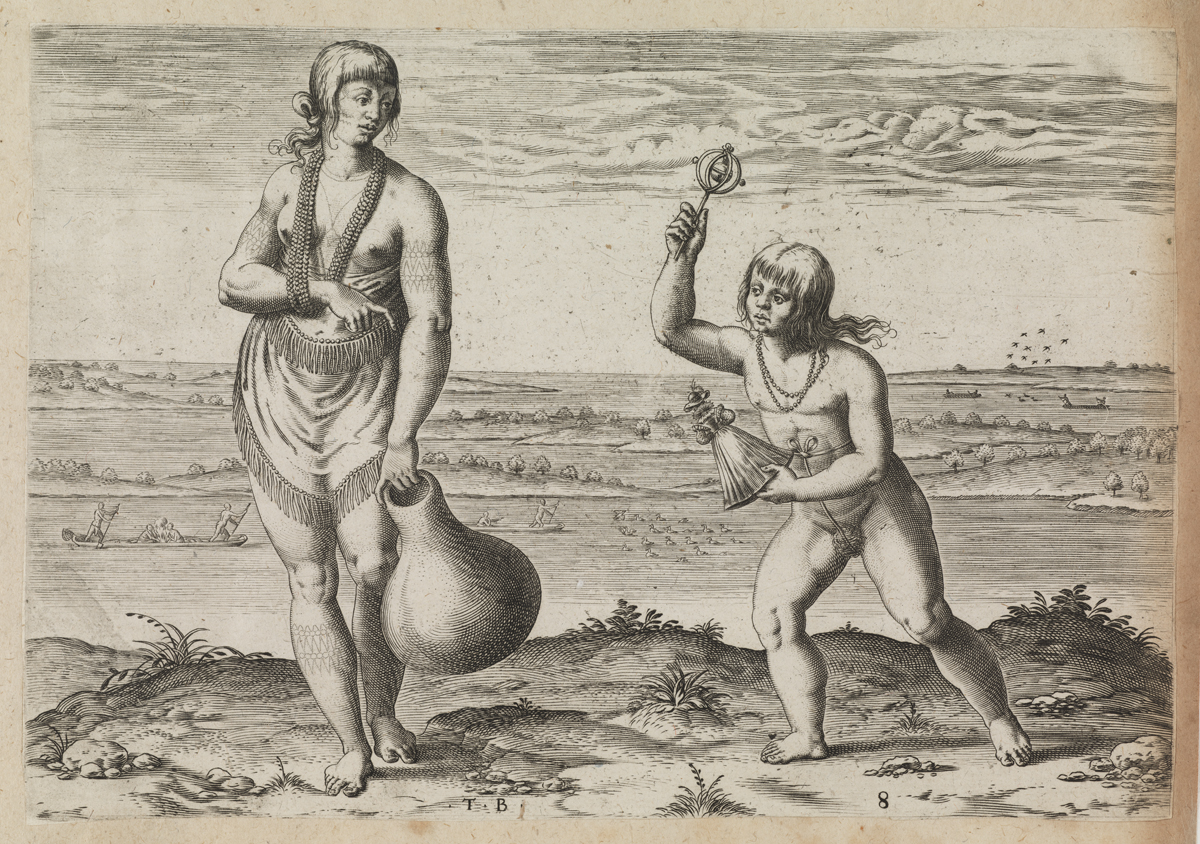 Clovis Point, about 9500 BCE. Paleo-Indians quarried chert, chalcedony, and jasper to make Clovis points. These stones, used as the tips of projectiles and as knife blades, are named after the New Mexico site where they were first discovered. (Courtesy of the Virginia Department of Historic Resources)
Image 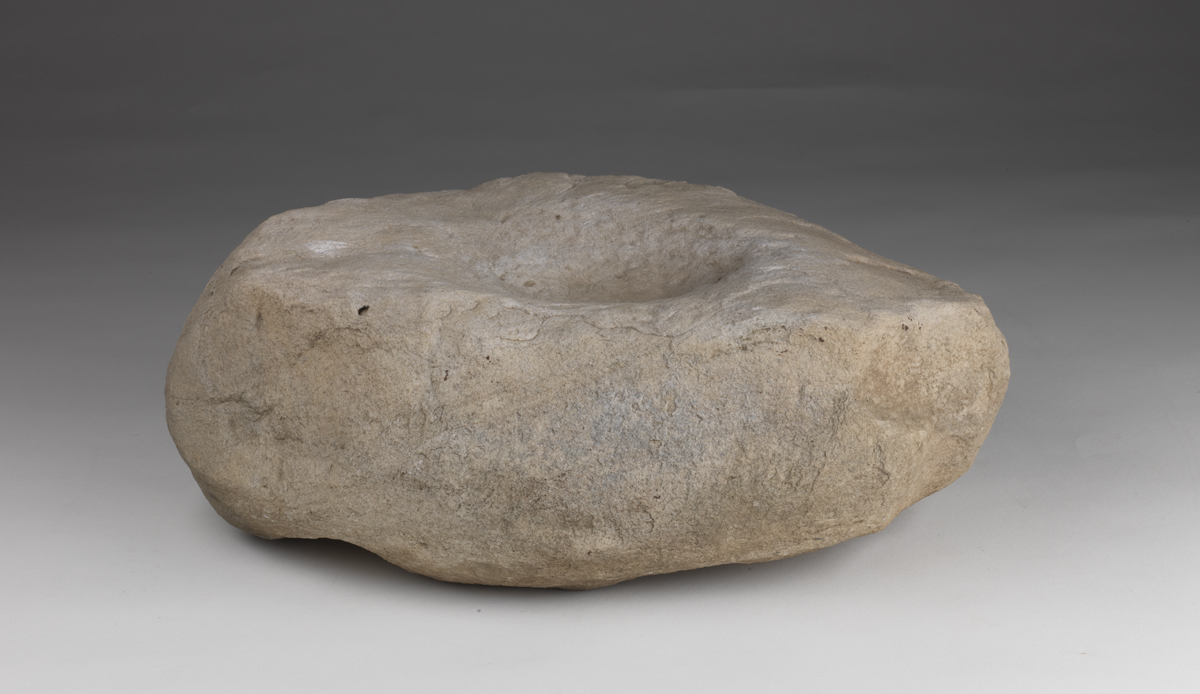 Grinding Stone, about 4000 BCE. Grinding stones made nuts and seeds more edible, but it introduced bits of stone into the food. The chewing of gritty meal wore down peoples’ teeth. (Courtesy of the Department of Historic Resources) 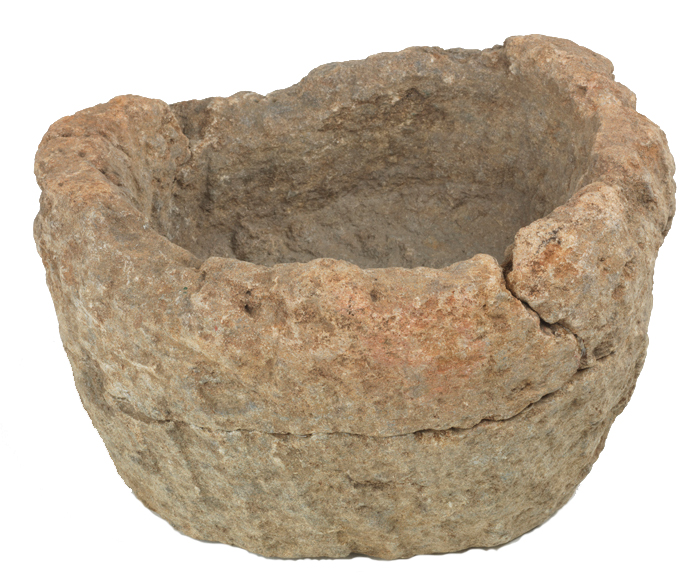 Steatite Bowl, about 2000 BCE. Steatite, or soapstone, could be easily carved to make cooking bowls. Its use suggests that people were more settled because the bowls were heavy and difficult to move. (Courtesy of the Department of Historic Resources)
Image 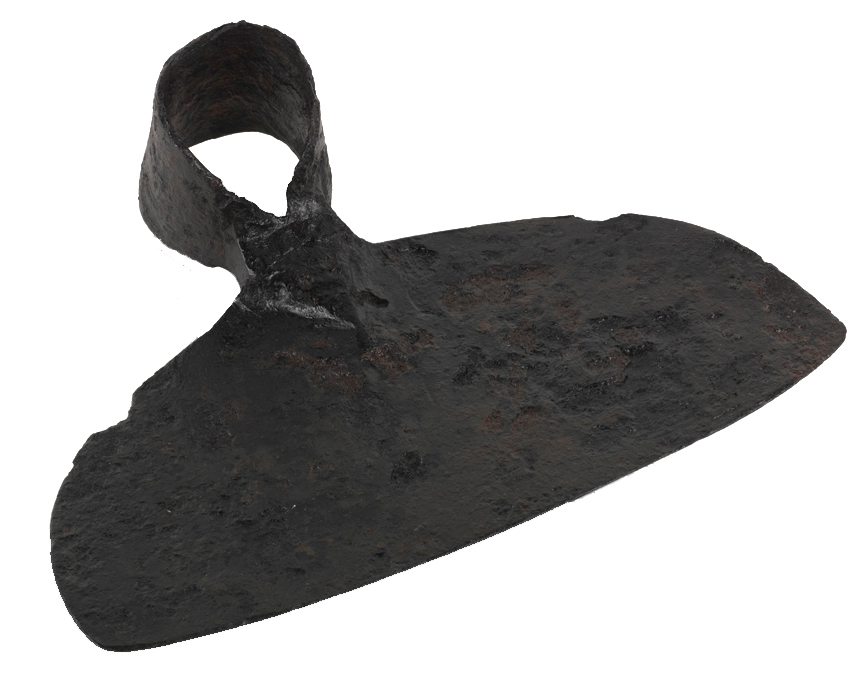 Woodland Hoe Blade, about 1500. The hoe was used to till or turn over the soil in farming and allowed the cultivation of large quantities of food to support growing populations. (Courtesy of the Department of Historic Resources) 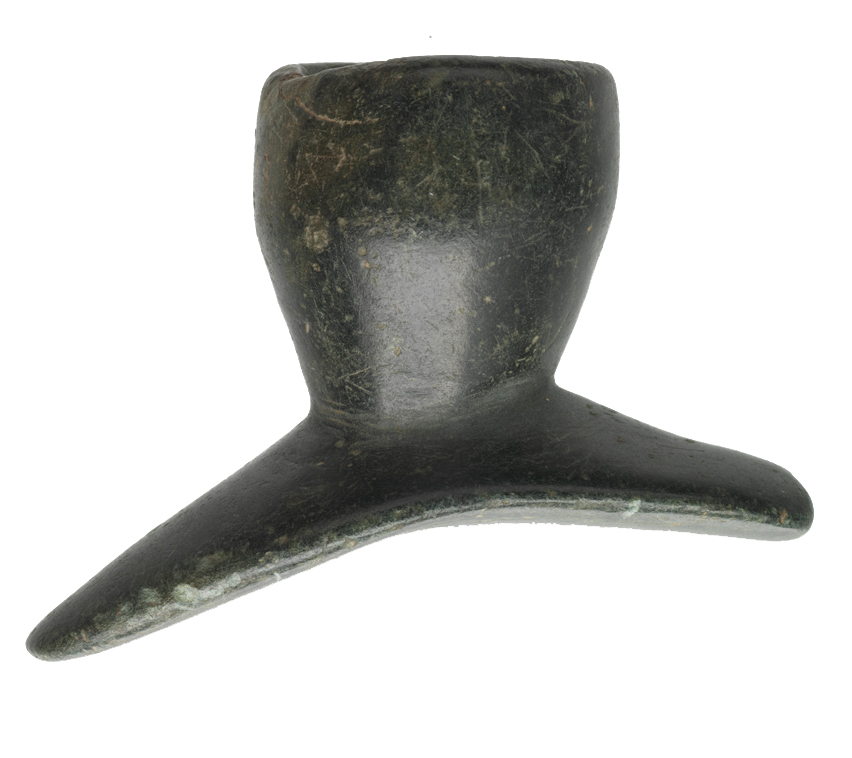 Stone Pipe, about 1500. A non-food crop, tobacco was important in social rituals and religious ceremonies. Pipes were often made from stone as well as clay. (Courtesy of the Department of Historic Resources)
Image

Bola, about 1500. A bola consists of two heavy stone balls attached with a strong cord. It was swung and hurled at waterfowl that became entangled as the bola wrapped around them. (Courtesy of the Department of Historic Resources) 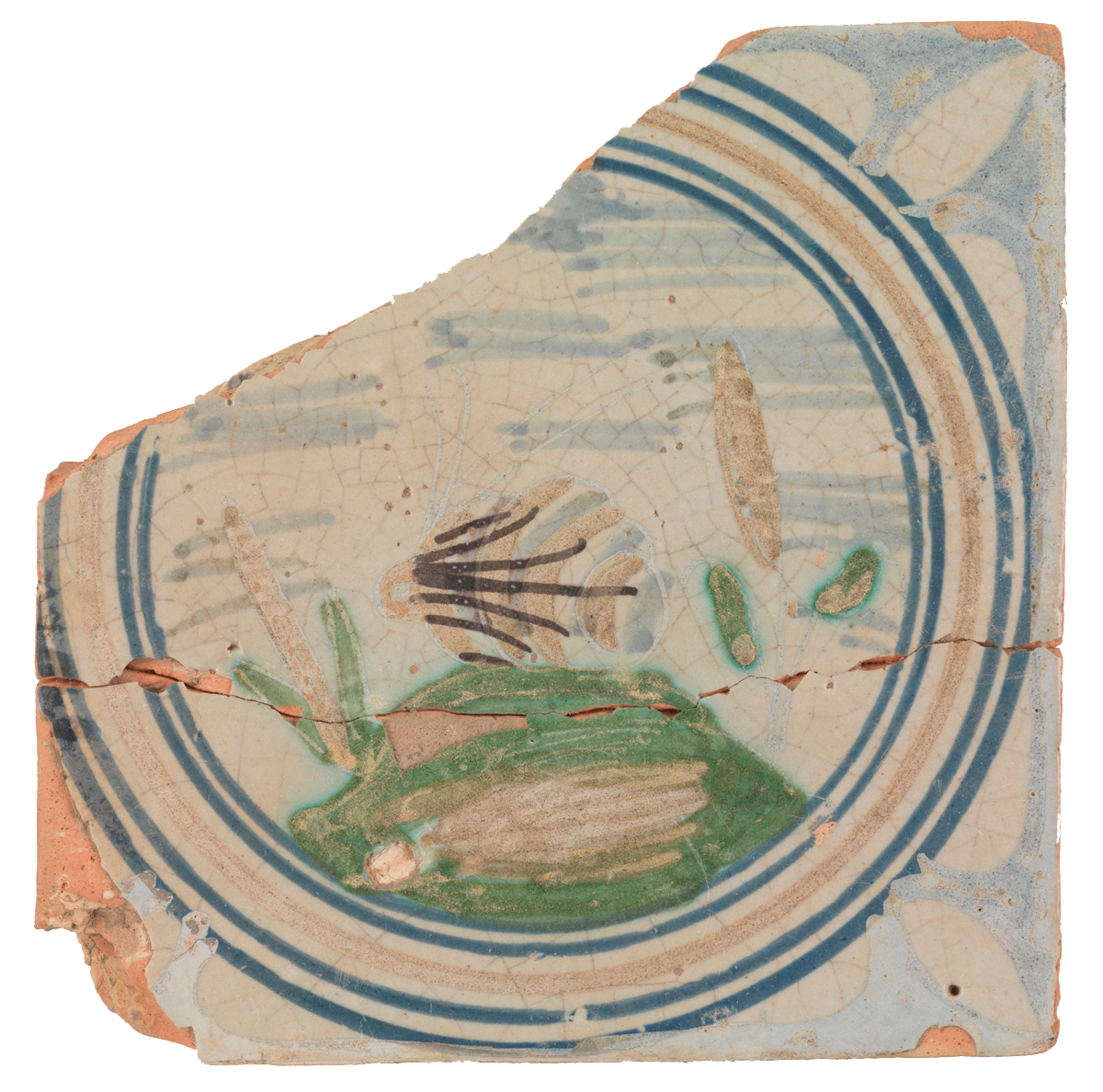 Ceramic Bowl, about 1000. Pottery was crafted by pinching together coils of clay dug from riverbanks; paddles wrapped with cord or net were were used to shape the exterior. (Courtesy of the Department of Historic Resources)