Three of Virginia’s Revolutionary era leaders played critical roles in the successful establishment of the nation’s three branches of government—the legislative, executive, and judicial. Those branches enact legislation, carry out and enforce the laws, and interpret their meaning. James Madison conceived a constitution that divided power within the federal government (checks and balances) and between federal and state governments (federalism). There was a real danger that the new government would fail without George Washington as its first president. No other American was so universally respected and trusted. The longest serving chief justice in American history, John Marshall, made the Supreme Court coequal with the legislative and executive branches of government. Four of the first five presidents were Virginians who guided the nation through its first three decades.

James Madison: “Father of the Constitution” and Legislative Leader

James Madison called for a Constitutional Convention and arrived with a comprehensive plan––the Virginia Plan. Having read extensively on political theory, he led the debates and was the principal author of the U.S. Constitution. In 1789, Madison established his role as a leader in the new House of Representatives when he drafted basic laws that set this branch of government into motion.

George Washington accepted the presidency in part to ensure the implementation of a strong federal government that would bring a diverse citizenry into a lasting union. Trusted by the people, his leadership enabled him to shape the new government. He made responsible appointments to the new agencies and courts. Effectively and quietly, he influenced domestic legislation and directed foreign affairs.

John Marshall strengthened federal power by establishing the right of the Supreme Court to overrule unconstitutional executive and legislative legal action and unconstitutional state laws. In Marbury v. Madison, he empowered the Court to be the final arbiter of the constitutionality of federal law. In McCullough v. Maryland, Marshall rejected the doctrine that powers not specifically given to the federal government belong to the states.

The nation became immersed in global affairs after 1800 when the decades-old conflict between England and France reignited and disrupted American commerce. Two presidents, Thomas Jefferson and James Madison, proved ineffective against the French emperor Napoleon and an English nation struggling for its survival. Jefferson did achieve a major accomplishment, the Louisiana Purchase, when Napoleon’s plans for a new world empire collapsed.

The Lewis and Clark Expedition and the Louisiana Purchase

In 1804, President Thomas Jefferson selected his personal secretary, Meriwether Lewis, to lead an exploration of the Louisiana territory. Lewis enlisted noted mapmaker and frontiersman William Clark to co-command a Corps of Discovery. From May 1804 to September 1806, the expedition identified a route to the Pacific Ocean and blazed a pathway for the new nation to spread westward.

When Spain gave control of New Orleans and the Mississippi Valley to France, it threatened both American security and trade. Although the Constitution gave the president no authority to purchase territory, Thomas Jefferson authorized the purchase of all the land west of the Mississippi River from the French—doubling the size of United States territory.

The War of 1812 and Foreign Entanglements

When England interrupted U.S. trade with France by seizing American sailors to serve in the British navy, President Thomas Jefferson levied an embargo on all foreign trade, with little effect in Europe but severe damage to the American economy. The hostility culminated in 1812 when President James Madison ill-advisedly declared war with England, a conflict that neither side won.

President George Washington warned against foreign entanglements. Thomas Jefferson advocated dismantling the military, but on becoming president he established a military academy at West Point and protected American shipping in the Atlantic and from Barbary pirates in the Mediterranean. Experienced in war and diplomacy, President James Monroe strengthened military defenses and in the “Monroe Doctrine” (1823) closed the Western Hemisphere to European colonization.

Eight years of foreign service had led Monroe to distrust European nations. Fearful that Spain and France might retake Latin America, that Russia might expand from Alaska into Oregon, and that England still held imperial ambitions, he warned those powers against interfering in the Americas. In exchange, the United States pledged to avoid involvement in the political affairs of Europe.

A hero of two wars—the Revolutionary War and the War of 1812—James Monroe also served in government for forty years. He was a senator, governor of Virginia, foreign minister, and secretary of state and of war. Monroe was elected to the presidency twice––the second time unopposed. His presidency became known as the “Era of Good Feeling,” when six states were added and Americans prospered. 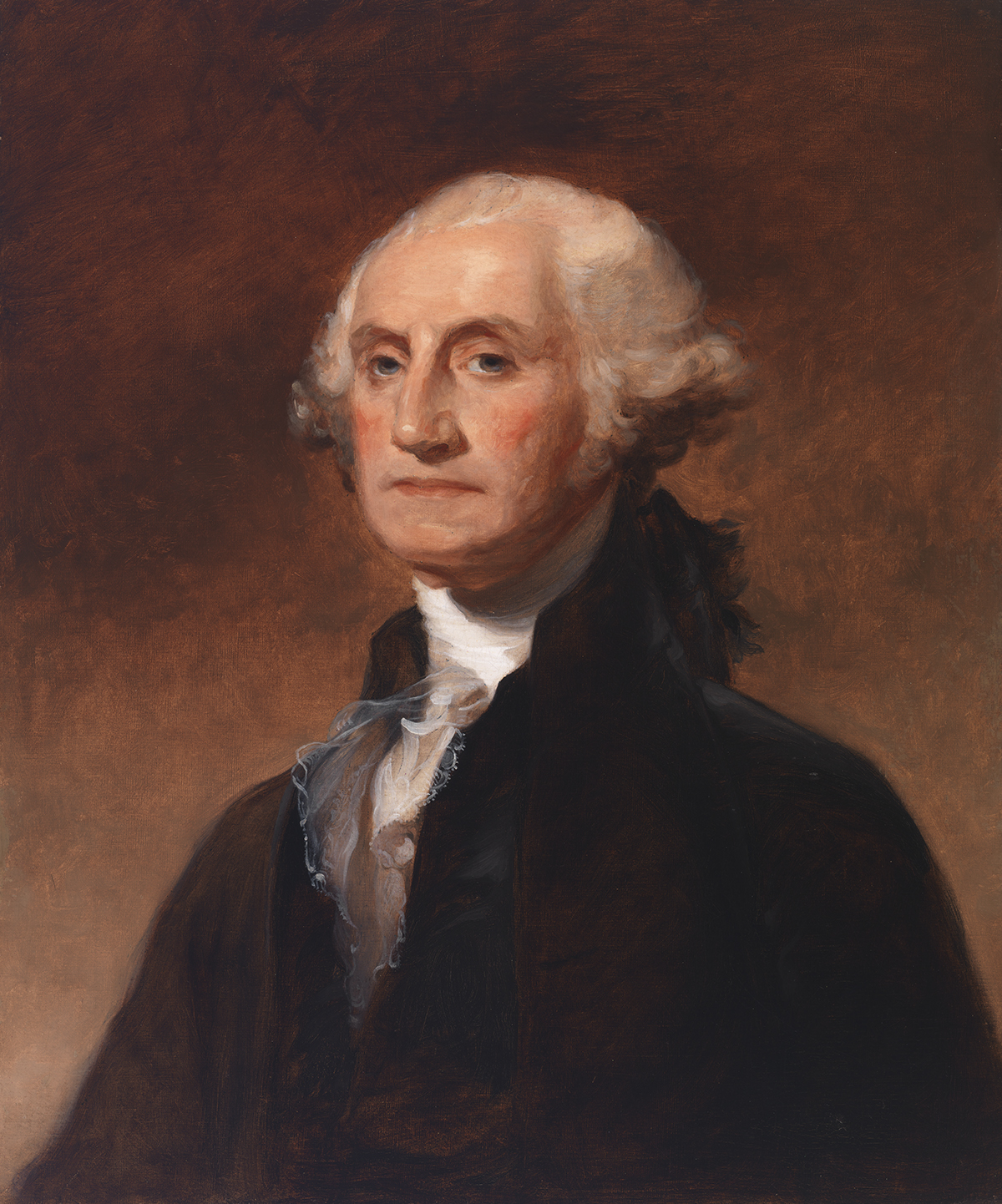 Portrait of George Washington, 1856 (copy of 1796 Gilbert Stuart original). Washington accepted the presidency in part to ensure the implementation of a strong federal government that would bring a diverse citizenry into a lasting union. His leadership enabled him to shape the new government. He made responsible appointments to the new agencies and courts, influenced domestic legislation, and directed foreign affairs. (VMHC 1857.2)
Image

Portrait of James Madison, 1856 (copy of 1805 Gilbert Stuart original). Madison conceived a constitution that divided power within the federal government (checks and balances) and between federal and state governments (federalism). (VMHC 1856.2)
Image 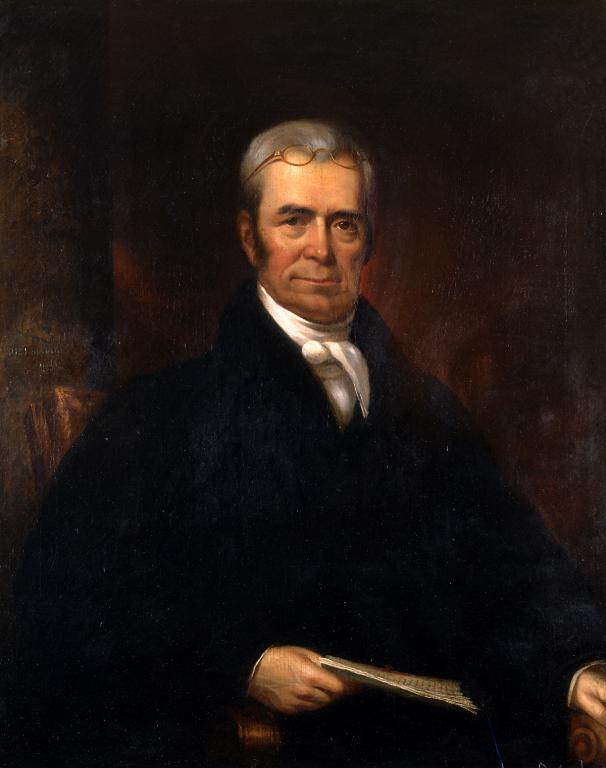 Portrait of Chief Justice John Marshall, 1832. The longest serving chief justice in American history, Marshall made the Supreme Court coequal with the legislative and executive branches of government. (VMHC 1988.8)
Image

Sculpture of Captain Meriwether Lewis and his dog Seaman, 2004. In 1804, President Thomas Jefferson commissioned his private secretary, Meriwether Lewis of Albemarle County, to explore and map the newly acquired Louisiana territory and establish an American presence there before European powers tried to claim it. (VMHC 2007.114)
Image 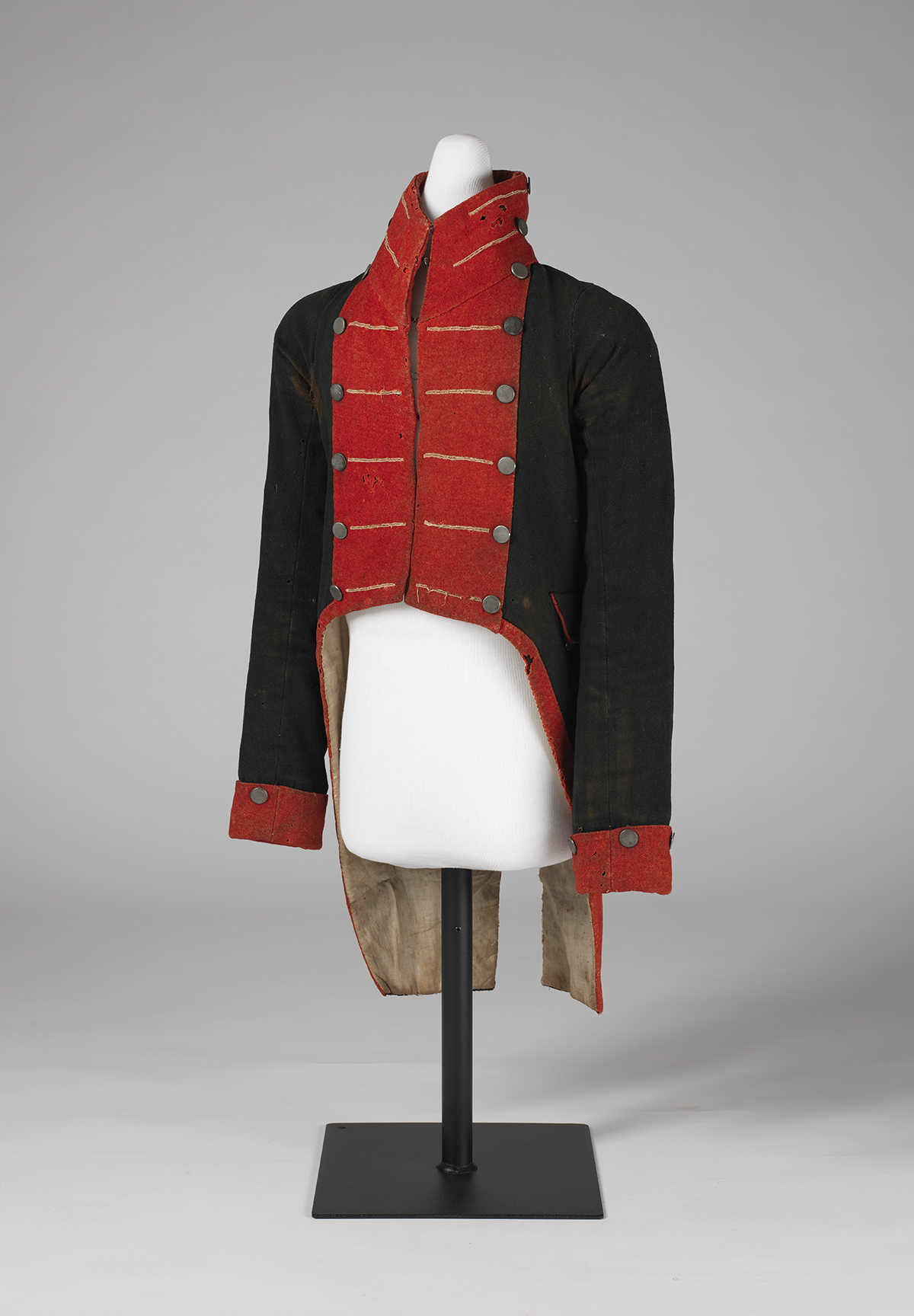 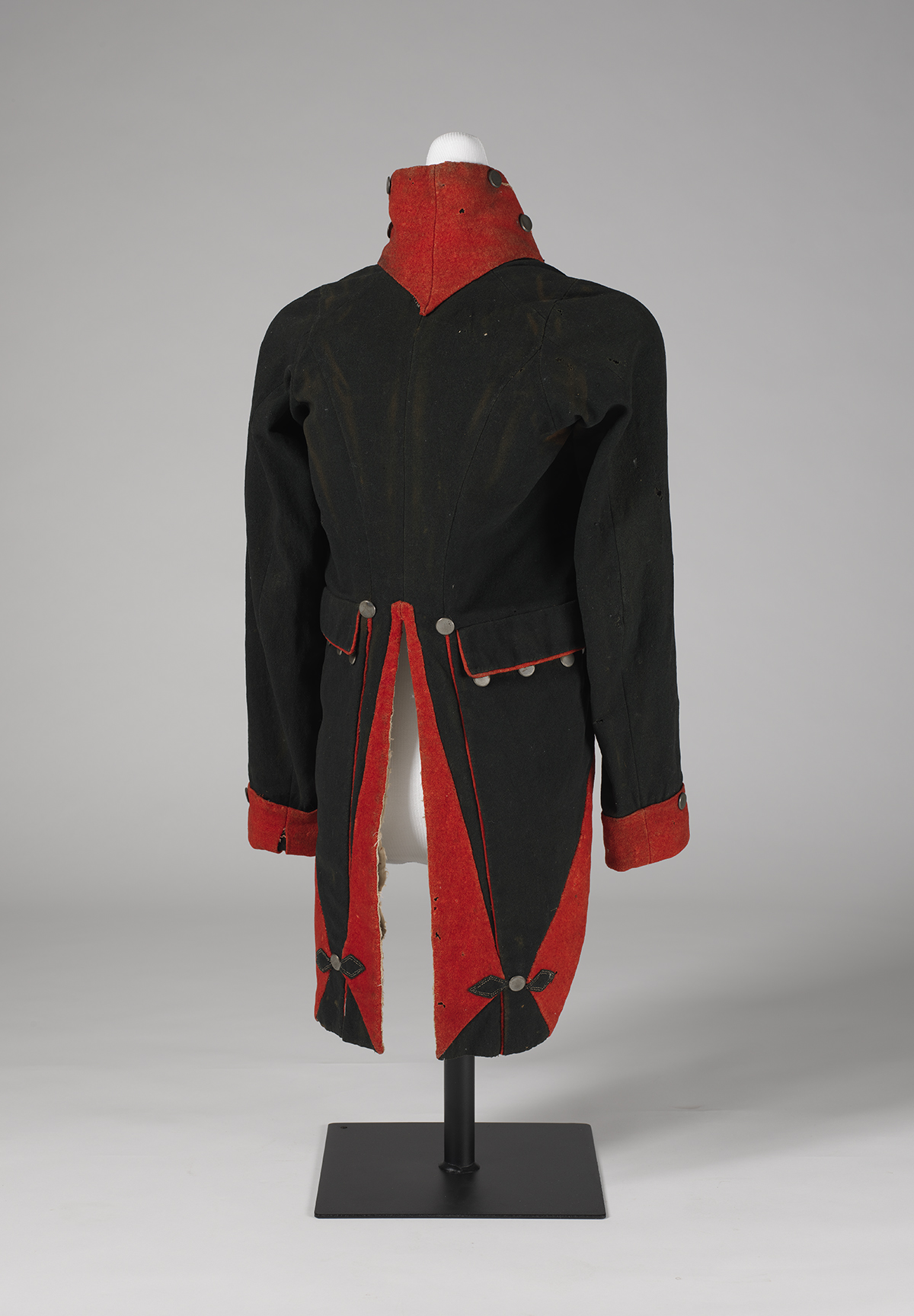 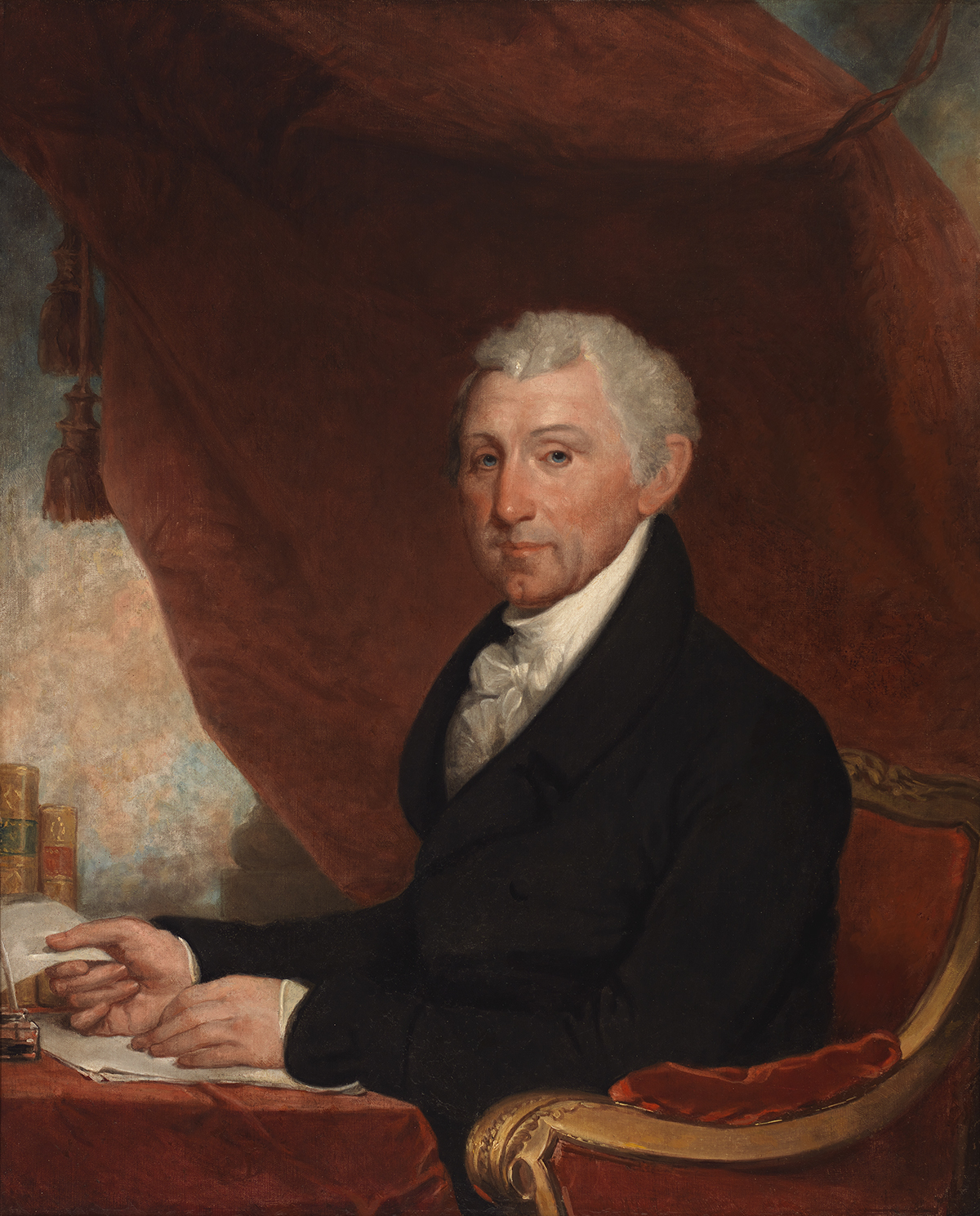