Because Black and white Virginians generally lived in segregated neighborhoods in the mid-twentieth century, race-neutral measures would not ensure racial balance in many schools, which was the new test of legitimacy under the Green decision of 1968. Therefore, race-conscious measures were taken. Supporters called them goals; opponents labeled them quotas.

In 1970, in the case Bradley v. Richmond School Board, Federal District Judge Robert Merhige, Jr., ordered a limited citywide busing program in Richmond. The decision invigorated white flight to private schools and to the suburbs. Calling it the "only remedy promising success," in January 1972 Merhige sought to nullify white flight by extending the busing program to the suburban counties, so that white children from the counties would be bused into the city and Black children from the city would be sent into the counties. Opposition from white parents was fierce—and soon was felt by politicians. Except in predominantly black districts, few candidates for office in Virginia could be elected unless they vehemently opposed busing.

On June 6, 1972, Merhige's decision was overturned by a 5 to 1 decision of the U.S. Fourth Circuit Court of Appeals. This ruling was affirmed a year later when the U.S. Supreme Court issued a 4 to 4 split decision, as Justice Lewis F. Powell, Jr., former chairman of the Richmond School board, recused himself. The Supreme Court subsequently invalidated most busing across city-county boundaries. As white flight continued in Virginia, Black students again became an overwhelming majority in city schools. This disparity became known as de facto ("in fact") segregation rather than de jure ("by law") segregation because it happened in spite of rather than because of the law. 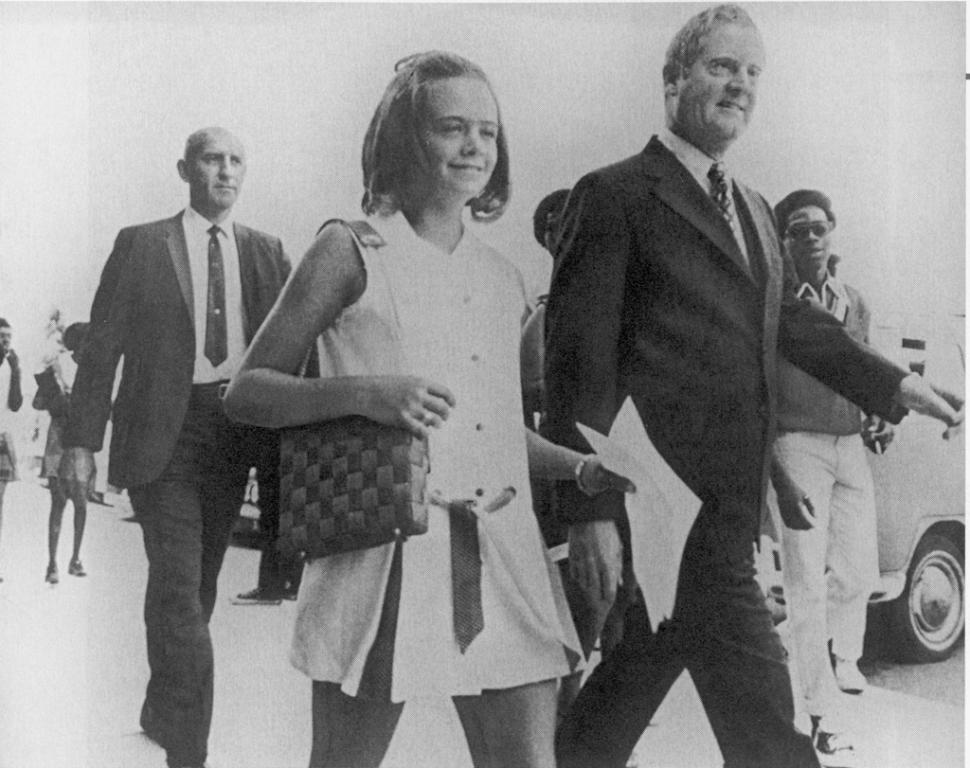 Governor A. Linwood Holton with daughter Tayloe
Tayloe Holton, daughter of then Governor A. Linwood Holton— the first Republican governor of Virginia in the twentieth century—participated in Richmond's court-ordered busing plan in the fall of 1970, although by precedent her parents could have placed her in one of the still mainly white suburban county schools. This photograph, which ran in the New York Times, shows a progressive governor escorting his daughter to her first day at the predominantly black John F. Kennedy High School. It served as a counterpoint to Deep South images of further resistance. (New York Times)
Image 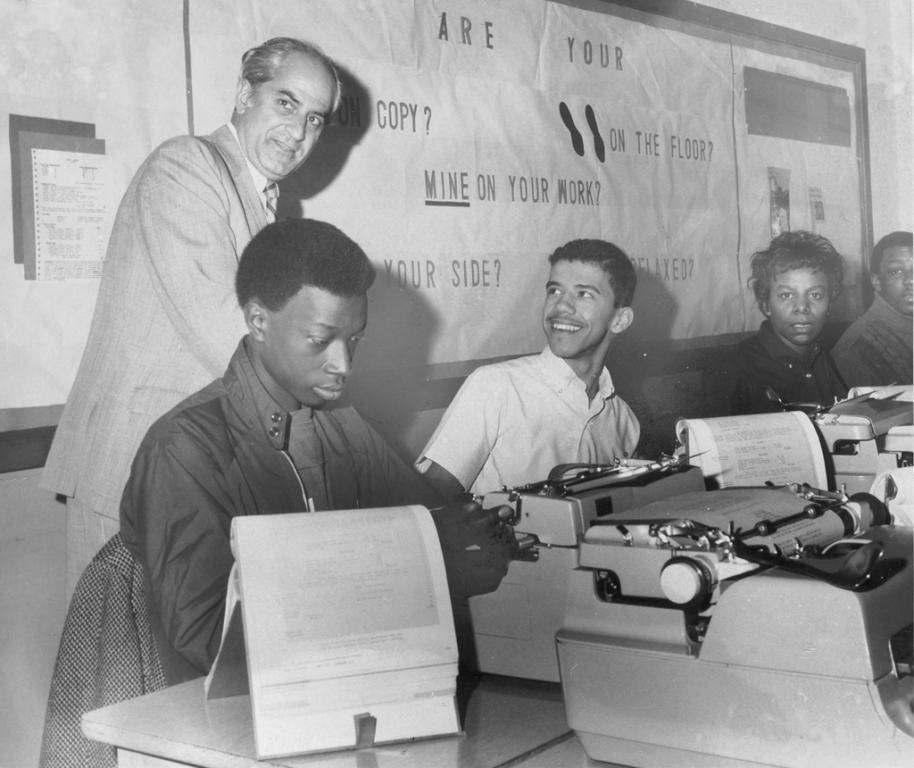 Judge Robert R. Mehrige, Jr. with students
Federal District Judge Robert R. Mehrige, Jr., inherited more than twenty school desegregation cases from his predecessor. Here he visits with students at Peabody High School in Norfolk to see how desegregation is working. Saying "I don't agree with everything I do, but I took an oath." In Richmond Mehrige ordered extensive pupil and teacher reassignment and citywide busing to promote desegregation in his opinion in Bradley v. School Board of the City of Richmond. (Richmond Times-Dispatch)
Image 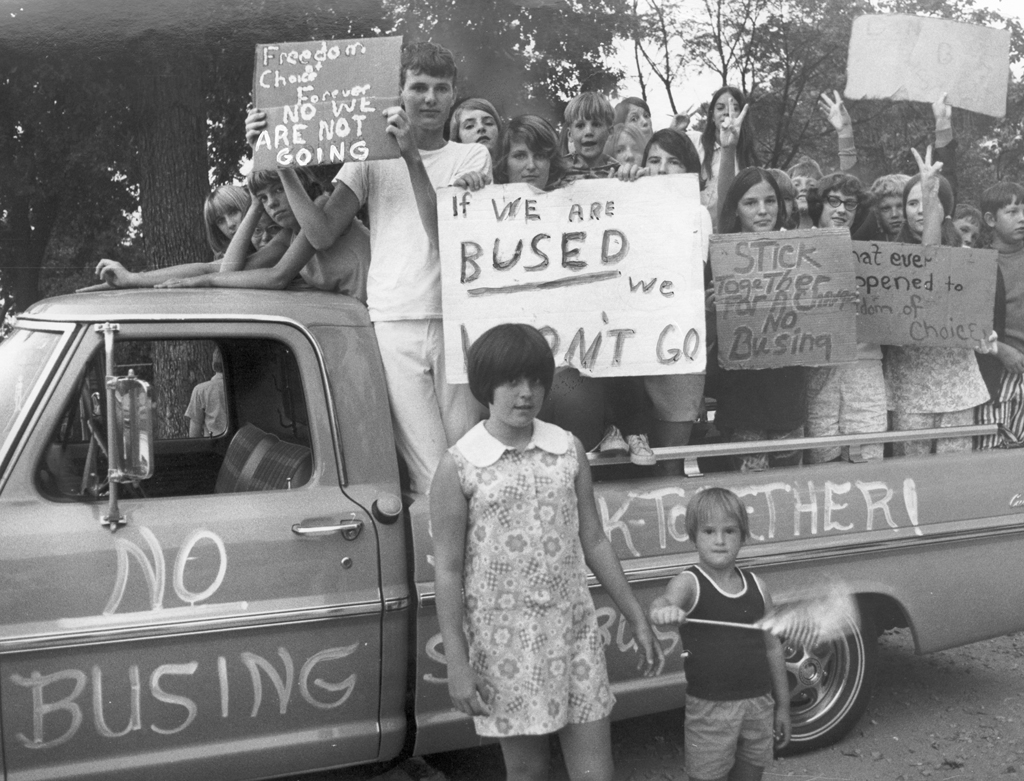 Students protest busing plan
The percentage of white students in Richmond city schools declined from 45 to 21 percent between 1960 and 1975. This so-called "white flight" prevented Richmond schools from becoming truly integrated. After a voter referendum to combine the suburban school districts of Chesterfield and Henrico counties with the city of Richmond's failed, Federal District Judge Robert Mehrige ordered the merger by judicial action in the decision in Bradley v. School Board of the City of Richmond, to facilitate busing to achieve racial balance in the schools. Marches, rallies, and other forms of protest ensued. (Valentine Richmond History Center)