In 1954, the political organization of U.S. senator Harry F. Byrd, Sr., controlled Virginia politics. Senator Byrd promoted the "Southern Manifesto" opposing integrated schools, which was signed in 1956 by more than one hundred southern congressmen. On February 25, 1956, he called for what became known as Massive Resistance. This was a group of laws, passed in 1956, intended to prevent integration of the schools. A Pupil Placement Board was created with the power to assign specific students to particular schools. Tuition grants were to be provided to students who opposed integrated schools. The linchpin of Massive Resistance was a law that cut off state funds and closed any public school that attempted  to integrate.

In September 1958 several schools in Warren County, Charlottesville, and Norfolk were about to integrate under court order. They were seized and closed, but the Virginia Supreme Court of Appeals overturned the school-closing law. Simultaneously, a federal court issued a verdict against the  law based on the "equal protection" clause of the 14th Amendment. Speaking to the General Assembly a few weeks later, Gov. J. Lindsay Almond conceded defeat. Beginning on February 2, 1959, a few courageous black students integrated the schools that had been closed. Still, hardly any African American students in Virginia attended integrated schools. 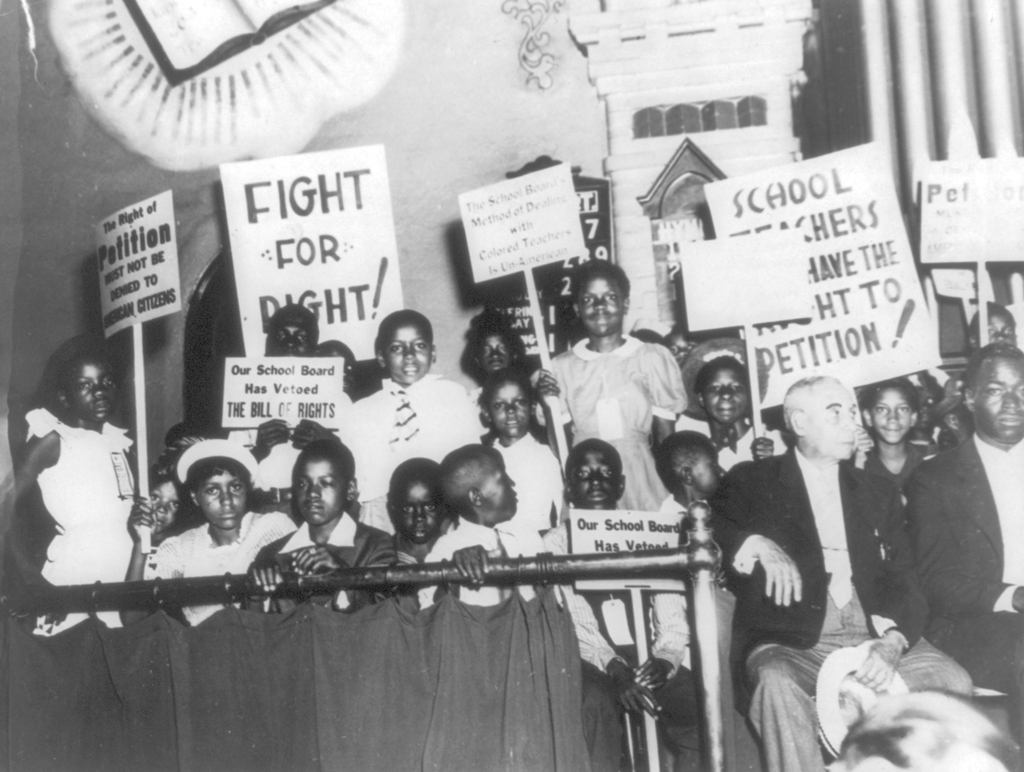 Protesters in Norfolk
In the 1930s the NAACP adopted a strategy "toward bringing Negro schools up to an absolute equality with white schools." The unequal pay scales of black and white teachers in southern schools became its first target. In October 1938, attorney Thurgood Marshall filed a petition for Norfolk teacher Aline Black seeking salary equalization. The school board fired her. Although the Virginia Teachers Association—a black teachers organization—agreed to pay her salary for a year while the case was taken to court, she moved to New York and the suit was filed instead on behalf of Melvin Alston, president of the Norfolk Teachers Association. In Alston v. School Board of the City of Norfolk, the Court of Appeals found that the salary inequality was based on race and violated the "equal protection" clause of the Fourteenth Amendment. The U.S. Supreme Court denied the school board's appeal, a decision that had national implications. (Library of Congress)
Image 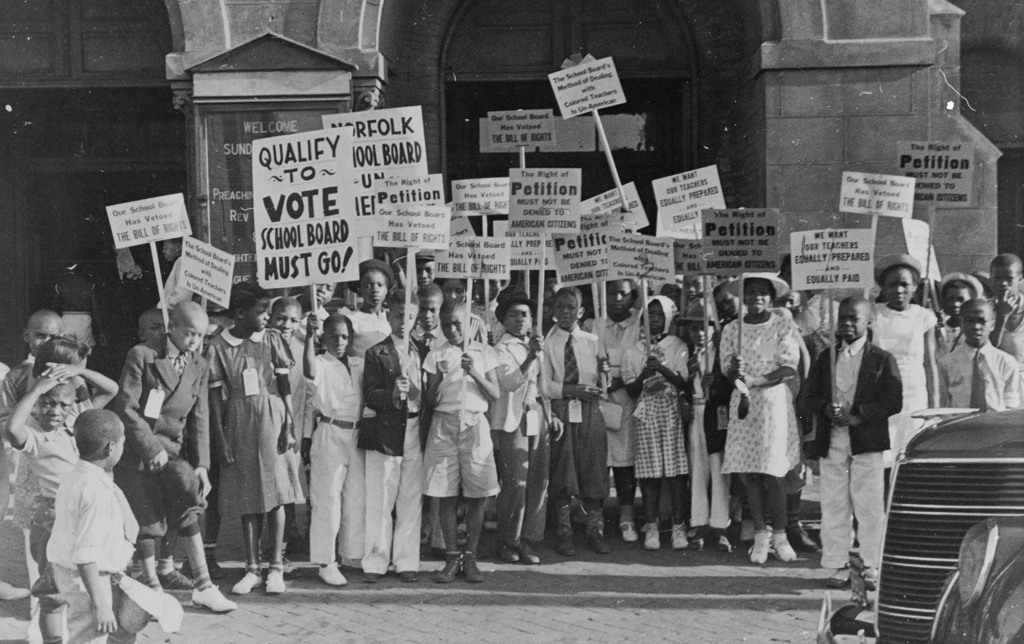 Parade, Norfolk, June 25, 1939
"WE WANT OUR TEACHERS EQUALLY PREPARED AND EQUALLY PAID" reads one of the signs at this June 25, 1939, parade in Norfolk protesting inequality between black and white schools. Overall, in 1937–38, the average salary of African American teachers was $526, slightly more than half the $1,019 average of white teachers. Teachers were prominent role models and highly visible members of black communities, which supported their battles for equal pay. Like many such events, this Sunday afternoon protest began at a black church although it was organized by the NAACP. (Library of Congress)
Image 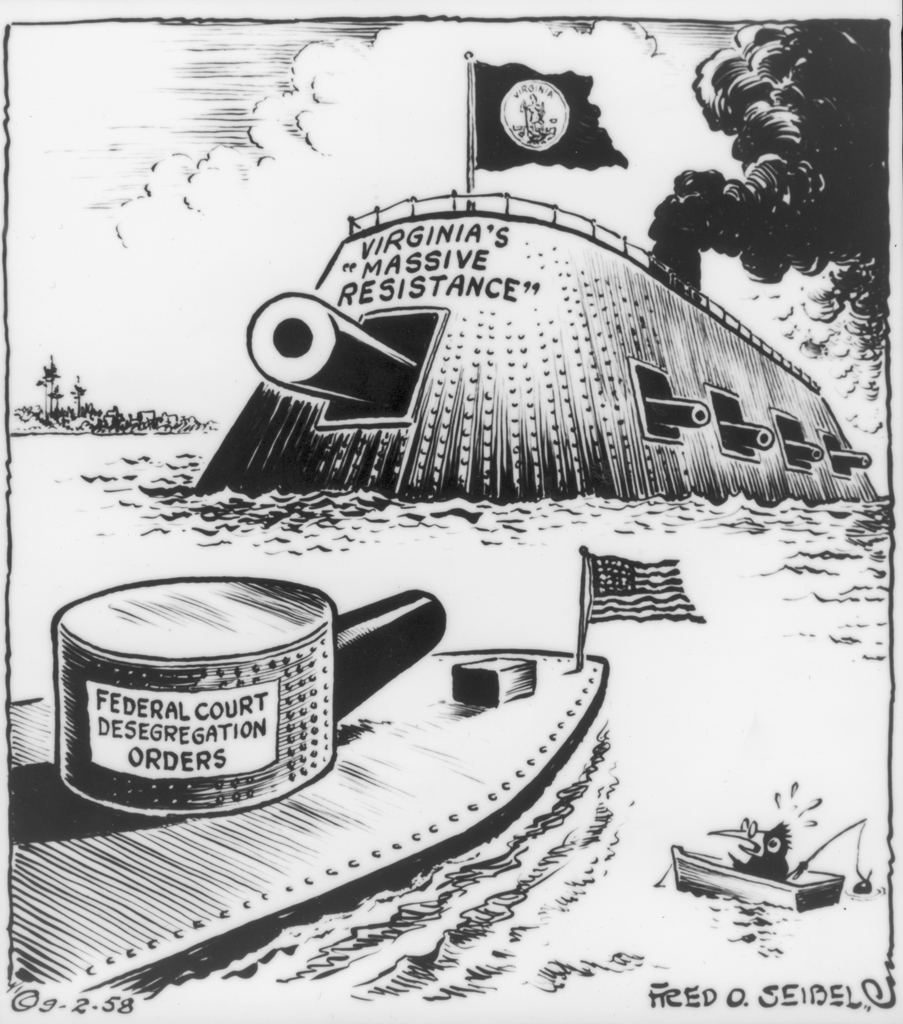 Political cartoon
Fred Seibel, editorial cartoonist for the Richmond Times-Dispatch, created "Moses Crow," a small figure inserted into each cartoon as Seibel's alter ego. Here, Moses Crow watches Virginia and the United States government fight over school desegregation with the former represented by the CSS Virginia (formerly the Merrimac) and the latter as the ironclad USS Monitor, the famous vessels that fought to a draw on March 9, 1862, in Hampton Roads. (Richmond Times-Dispatch)
Image 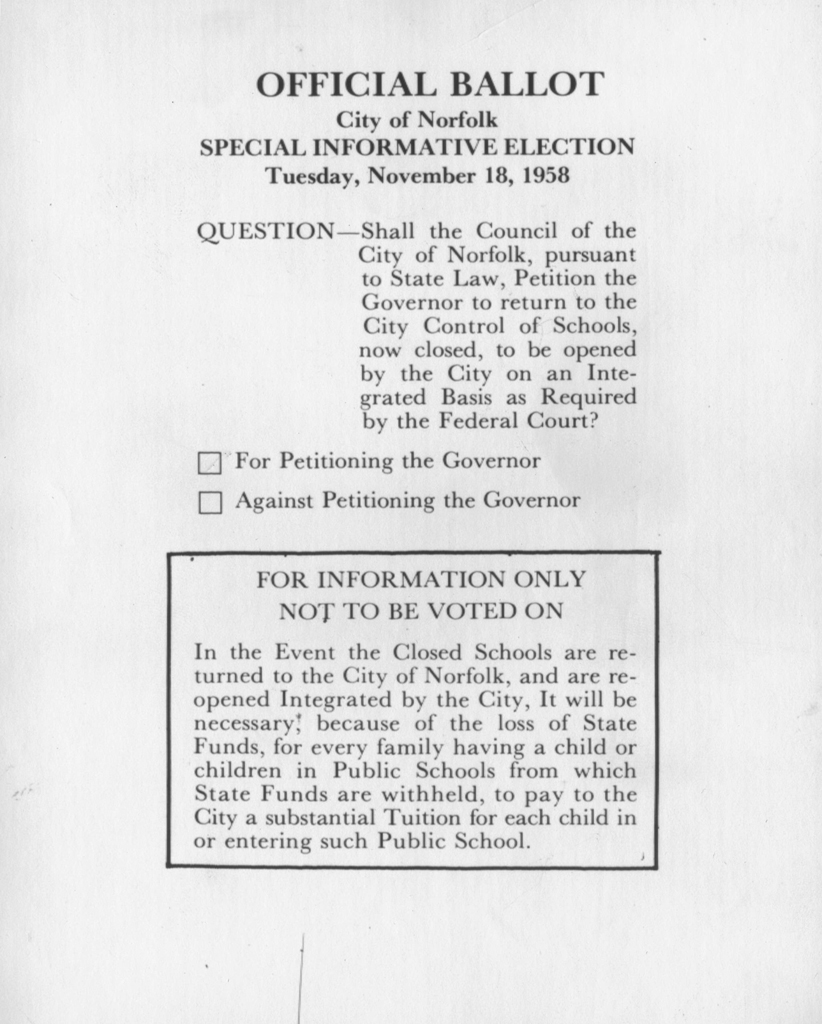 Ballot, November 1958
Faced with imminent integration under court order, six white schools in Norfolk were closed on September 27, 1958. This ballot asked Norfolk voters two months later whether they wanted the schools reopened on an integrated basis. It makes clear, however, that in that event there would be no state support for the schools and that parents would be assessed heavy tuition fees. The state law cutting off support for integrated schools was overturned on January 19, 1959, leading to the beginning of large-scale integration two weeks later. (AP)
Image 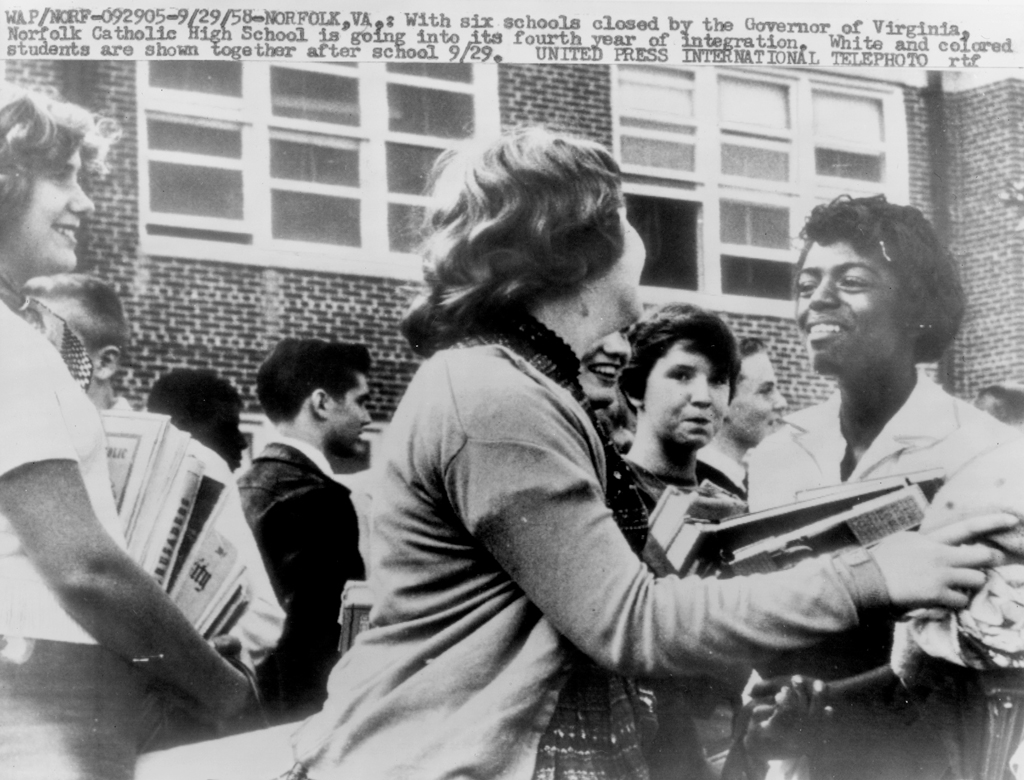 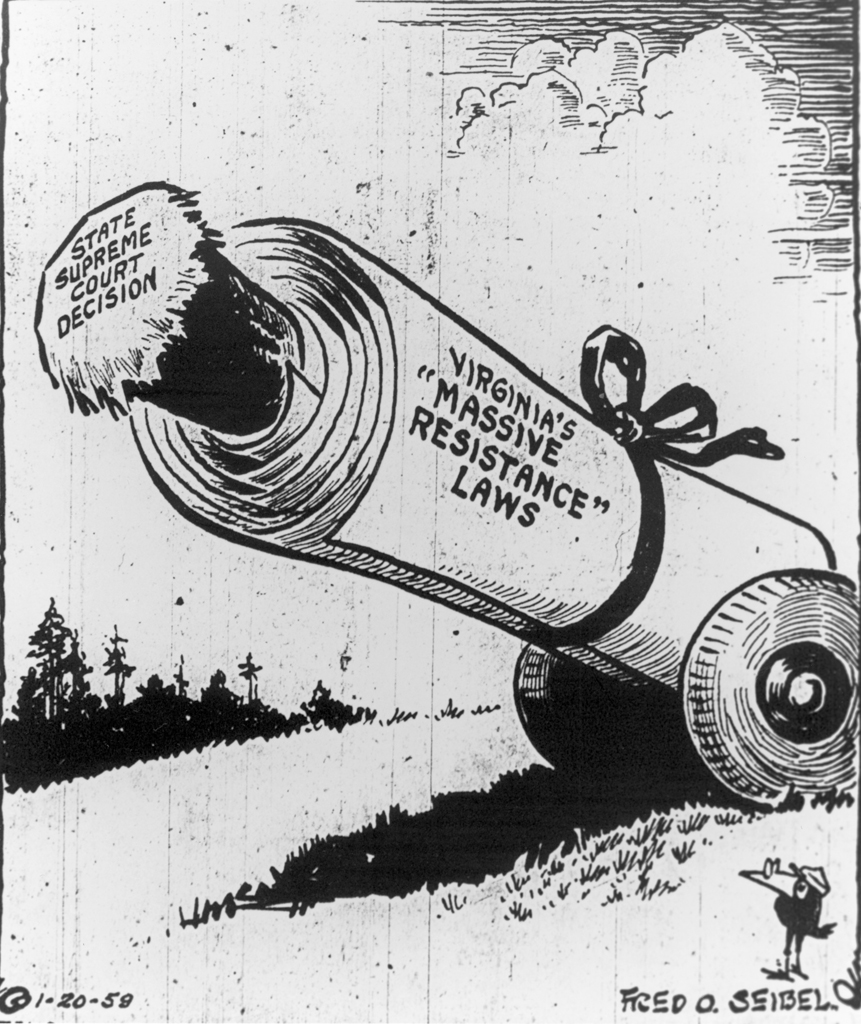 Political cartoon
On January 19, 1959, the Virginia Supreme Court of Appeals struck down the linchpin of the Massive Resistance laws, the one closing schools about to be integrated. Here, the decision plugs the barrel of the cannon of Massive Resistance. (Richmond Times-Dispatch)
Image 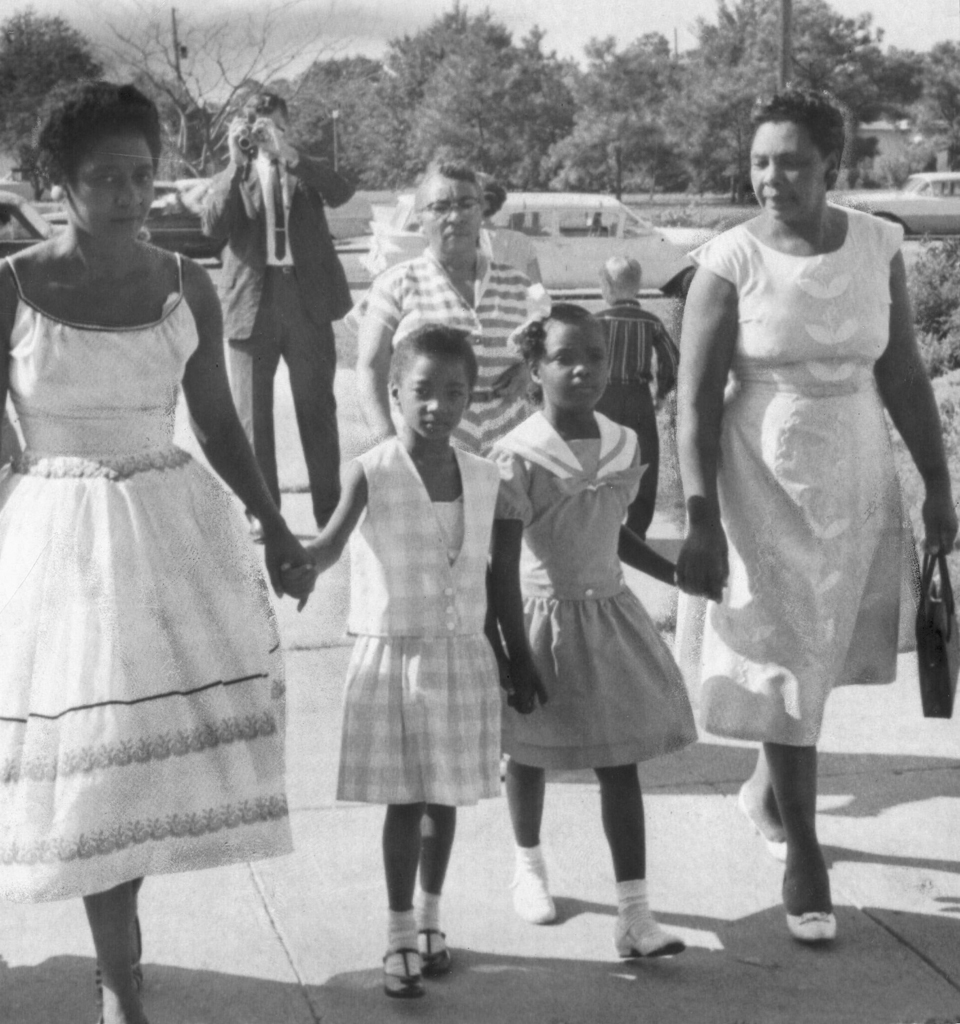 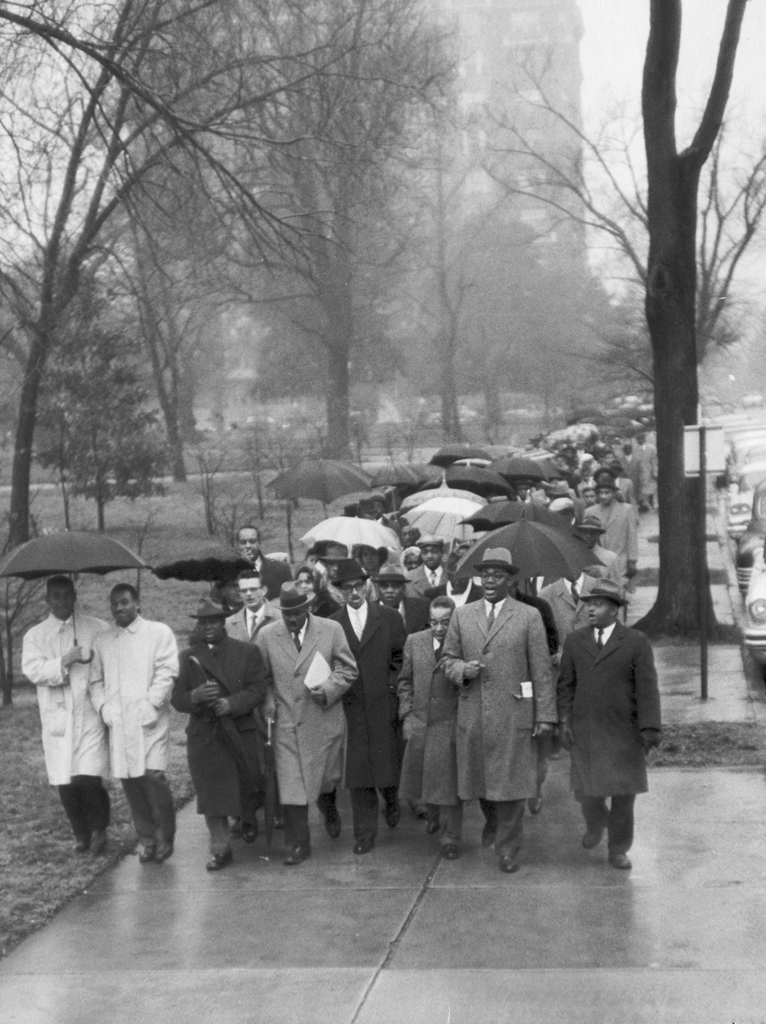 "Pilgrimage of Prayer," January 1, 1959
On January 1, 1959, about 1800 people met at The Mosque, a Richmond theater, for a two-hour "Pilgrimage of Prayer" meeting sponsored by the Congress of Racial Equality (CORE). Then, about 800 participants marched in the rain to the Capitol, where they passed a resolution urging appointment of a biracial commission to seek a solution to Virginia's school integration crisis. The resolution requested "a change of heart and change of policy by the state of Virginia." Reverend Wyatt Tee Walker of Petersburg said the protesters were "just as concerned about 13,000 white children being locked out of school as they are about segregated schools." (Richmond Times-Dispatch)